In his fresh writ petition, Karti Chidambaram has challenged the summons on the ground that the ED has no jurisdiction to issue such notices based on the FIR lodged by the CBI. 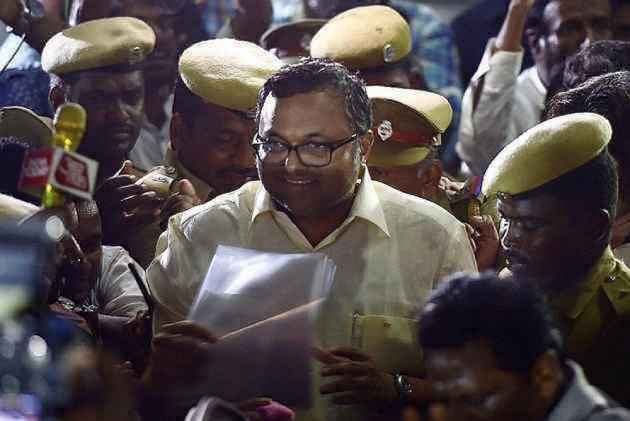 The Supreme Court has refused to grant Karti Chidambaram  interim protection from arrest by the Enforcement Directorate in an alleged money laundering case related to INX Media, as the CBI has sought an extension of his custody for nine more days in a trial court.

The apex court has sought response from ED on Chidambaram's fresh plea seeking protection from arrest, and  quashing of the Enforcement Directorate's summons against him in the INX Media corruption case, and has listed the matter for March 8.

In his fresh writ petition, Karti Chidambaram has challenged the summons on the ground that the ED has no jurisdiction to issue such notices based on the FIR lodged by the CBI.

The plea was mentioned Monday by his counsel before a bench comprising Chief Justice Dipak Misra and Justices A M Khanwilkar and D Y Chandrachud, which agreed to hear it along with related pending matters scheduled for hearing today.

The top court had on February 23 refused to stay the summons issued by the ED against Karti -- who is presently in CBI custody in the INX Media money laundering case -- after the CBI said he was "not a common criminal" and his plea for quashing the notice was "a guise for an anticipatory bail plea".

However, the top court had asked Karti to request the competent authority to postpone the ED summons seeking his appearance.

The bench had listed the matter for hearing on March 6 after senior advocate Kapil Sibal, who had appeared for Karti, sought time to file a proper application to challenge the ED proceedings.

The ED had registered a case against him and others in May last year. It registered an Enforcement Case Information Report (ECIR), the ED's equivalent of a police FIR, against the accused named in a CBI complaint. These included Karti Chidambaram, INX Media and its directors, Peter and Indrani Mukerjea.

An FIR, filed on May 15 last year, had alleged irregularities in the Foreign Investment Promotion Board (FIPB) clearance to INX Media for receiving Rs 305 crore in overseas funds in 2007 when P Chidambaram was Union finance minister.

The CBI had on September 1 last year said there were "good, cogent" reasons for issuing the LOC.

The Chidambarams have denied all the charges made against them.

Earlier, a single judge bench of the Madras High Court had stayed the LOC issued against Karti Chidambaram and others in the graft case.

Later, the apex court considered the CBI appeal and stayed the operation of the high court order staying the LOC.