A young nadaswaram maestro from Sri Lanka regales Kerala audiences on the eve of the anniversary of a legend of the wind instrument. Viewing Jaffna’s P.S. Balamurugan alongside 20th-century giant Rajarathinam Pillai 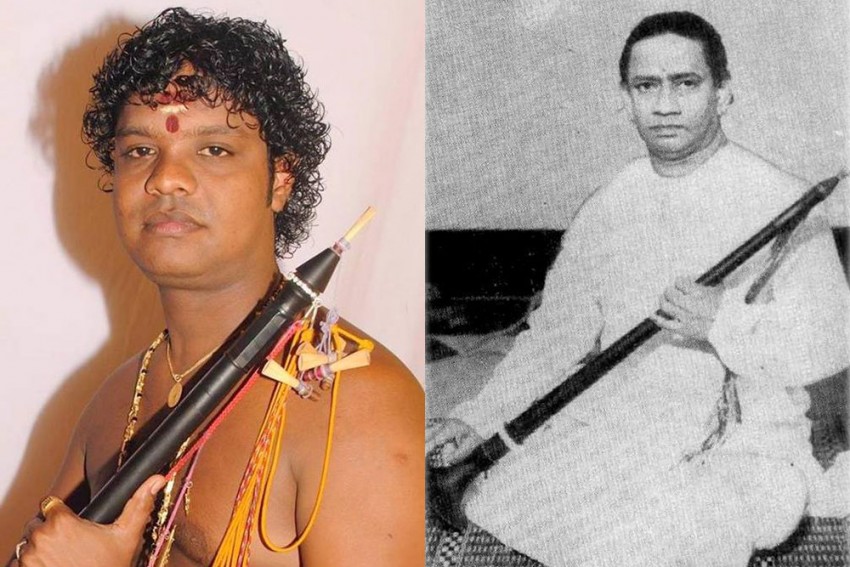 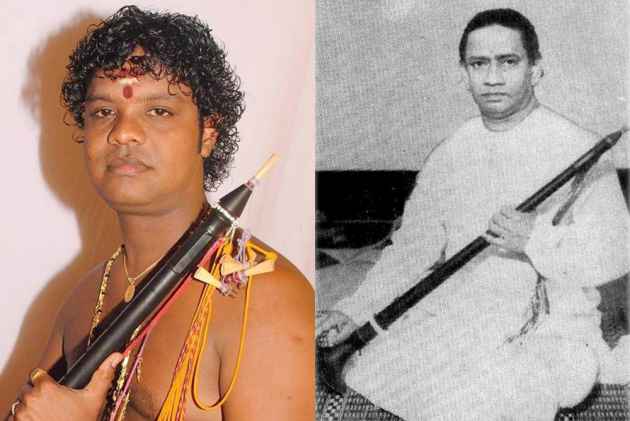 A couple of days ahead of T.N. Rajarathinam Pillai’s death anniversary this week, another nadaswaram maestro gave two Carnatic concerts at a Kerala shrine north of the Palk Strait that divides his country from India. Young P.S. Balamurugan came to festive Vaikom temple from Sri Lanka, where his family with roots in Tamil Nadu has settled for no less than three generations.

Globe-trotting Balamurugan, 37, is not an unfamiliar figure for south Indian classical music lovers—be it along the Deccan or elsewhere in the art world that has a noticeable population from the country’s peninsula. Of late, eight years after the end of a quarter-century-long civil war in his island-nation, this Jaffna-based piper is particularly busy performing for audiences in the East and West amid peace restored in the Lankan provinces.

Definitely talented and immensely adept in handling his double-reed wind instrument, Balamurugan, though, is an early phase of career to be equated with much-accomplished Rajarathinam (1898-1956), simply called TNR. The late maestro is widely considered an all-time great, having repeatedly proven his virtuosity in exposing the nadaswaram’s capability in bringing out the beauty of Carnatic like no other. Especially appealing was his essaying ragas by filling detailed alapanams with linear curves as well as fast bhrigas. Born in the Cauvery belt, TNR was also a classical vocalist and had a brief stint with Tamil cinema as well. Old-timers would recall that his singing wasn’t ordinary, but then his mastery over the nadaswaram overshadowed anything arty he pursued. In 1940, TNR acted as the hero in a Tamil film that told the story of 15th-century poet Kalamega Pulavar. It was a one-off for TNR, who had already become famous then as a nadaswaram player—so much so, the movie (Kalamegam) ended up featuring additional scenes of the protagonist playing the instrument. The screenplay was penned by TNR’s contemporary, Tamil rationalist poet-lyricist Bharathidasan, whose compositions aren’t alien to Carnatic either.

Balamurugan, who often teams up with compatriot instrumentalist K.P. Kumaran to present duet concerts, hasn’t shown a flair for versatility beyond playing the nadaswaram. Even so, the banner of being a Lankan Tamil is least the USP of this dusky and well-built instrumentalist. It takes just a dash of his music for aesthetes to sense Balamurugan’s grip over the laya and pitch. Right from the lung power to the ease in the range of swaras his nadaswaram travels, there is no denying that this islander is effectively a mainstream Carnatic exponent (with a profile of playing in other countries for the past 14 years).

Having spent his childhood and the rest of the formative years in the Nallur suburb of tropical Jaffna, Balamurugan is particular that he plays the instrument bare-chested—as is the archetypal look of a nadaswaram vidwan. This is something he sticks to even while performing in very cool climes like, say, a temple in trans-Atlantic America. That way, he contrasts with TNR, who carried with him the spirit to defy the conventional dress code—and missed no chance to wear a shirt and, sometimes, trousers or even something else he thought would lend him the looks of a Hindustani musician. TNR’s Thiruvaduthurai village (in Thanjavur belt) is fertile and green, as opposed to the place from Balamurugan’s traces his ancestry. The new-age nadaswaram player’s forefathers are from low-rain Pudukkottai region, known for its rocky hills, semi-arid soil and high temperature round the year. Jaffna’s Nallur, equally tropical, has a Kandaswamy temple, which is the Lankan peninsula’s largest Saiva shrine with lord Muruga holding the vel (javelin). Rebuilt from what was originally founded a millennium ago, the complex centres around a predominant Tamil population residing in the pocket that is a former capital of the Jaffna kingdom (1215 CE-1624 CE). Nallur gathered further historicity by becoming the birthplace of scholar-polemicist Arumuka Navalar (1822-79) who was instrumental in giving a fresh lease of life to Hindu traditions in Lanka.

TNR’s professional profile, too, was thickly linked with a temple culture. In fact, he became the nadaswaram player at his native Thiruvaduthurai’s Masilamaneeswara Kovil, some 15 km away from Mayiladuthurai in Nagapattinam district now. Dawn-time visitors to the Shiva temple used to be smitten by the way he played Bhoopalam, the hour’s raga—or so goes the story. (It’s another matter that TNR later became synonymous with Todi, courtesy his endless skills in delineating the microtones-reliant raga.) TNR’s initial guru was Carnatic violinist Thirukodikaval Krishnaiyer, while he learned nadaswaram from Ammachatram Kannuswami Pillai. His entry into Carnatic music was as a vocalist, but soon TNR specialised in nadaswaram on the advice of the pontiff of the Thiruvaduthurai Adheenam, a Shaivite Mutt.

Balamurugan, who learned under Alavetty Padmanabhan of Nallur, has his early-teenage son already showing promise of becoming a noted nadaswaram player, according to buffs. TNR, on the other hand, had no children (though he had married five women). If that yesteryear maestro could inspire a whole generation of Carnatic musicians from (late) Semmangudi Srinivasa Iyer to Sanjay Subrahmanyan, Balamurugan is fascinated by 20th-century stalwart vocalists Maharajapuram Santhanam and Madurai Somu among others.

Given the intensity of the internal strife he saw all around as a child and growing youth, Balamurugan can recall only with trepidation the violence he saw while learning nadaswaram—pepped up also his father P. Subbasamy Pillai. The other day, on December 10 and 11 at the sprawling Vaikom Mahadeva temple in south-cental Kerala’s Kottayam district, Balamurugan yet again enthralled the auspicious Ashtami-day crowd with his kacheri strung with core Carnatic ragas. As the nadaswaram master, along with his ensemble including the tavil drummers, trundled down the fascinating corridors of classical music, the row of caparisoned elephants opposite them added visual beauty to the bright forenoon concert.