'Over 250 policemen went on a day's mass leave on Monday. Some of them were part of the team which was to give the guard of honour to the Union home minister' 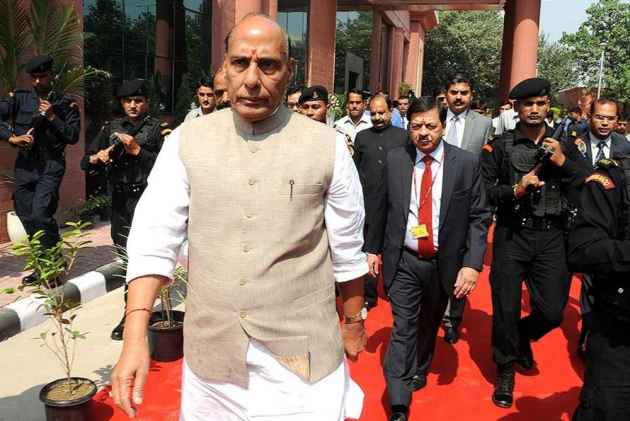 More than 250 policemen, some of whom had to give the guard of honour to Home Minister Rajnath Singh during his visit to Jodhpur yesterday, went on a day's mass leave over rumours that their pay scale would be reduced.

Singh was on a brief visit to Jodhpur to inaugurate a regional training centre for the Intelligence Bureau (IB).

"Over 250 policemen went on a day's mass leave on Monday. Some of them were part of the team which was to give the guard of honour to the Union home minister. As they refused to report on duty, the team was replaced with other policemen," Jodhpur police commissioner Ashok Rathore said.

He said abstaining from duty without sanctioned leave was indiscipline and calls for disciplinary action.

Additional Director General of Police M L Lathar too had to face a similar embarrassing situation as the policemen refused to give him the guard of honour when he visited the Jodhpur Police Commissionerate yesterday.

In a separate incident, 10 policemen posted at Jaipur's Civil Lines Metro Station got their heads tonsured in protest yesterday after six of their colleagues were transferred to police lines for allegedly protesting over the pay cut rumour.

The rumour had it that the constabulary's pay scale would be reduced from the existing Rs 24,000 to Rs 19,000 per month.

Rajasthan Home Minister Gulab Chand Kataria shot down the rumours, saying the government issued no order for reducing the salary of any employee, including police personnel.

"Issues related to salary are pending with the Cabinet Committee. So, there should be no confusion," Kataria said.

Rajasthan DGP Ajit Singh said any indiscipline would not be condoned. "There are rumours pertaining to salary cut issue. We have provided our view to the government. People should not act in a way that hurt the dignity of profession."

The constabulary had been staging protests across the state for a fortnight over the alleged salary cut proposal.

Their protest was previously limited only to boycotting the mess facility and wearing black ribbons during duty hours.

A message on social media had gone viral ahead of the festive season which is believed to have led to the protests.