Pillay Towers Above All

The mercurial forward's brilliance and histrionics dominated the year as the team struggled to dish out their best. 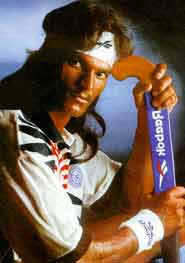 Dhanraj Pillay's onfield brilliance as well as his histrionics dominated the year as the Indian men's hockey team struggled to dish out their best on astro-turfs in international meets.

India failed to manage a top-place finish in even a single major tournament throughout the year though they proved their mettle as a regional power-house by winning the silver medal in the Asian Games in Busan.

The major setback for the team came in the prestigious World Cup held in Kuala Lumpur earlier in the year, where it faltered to finish tenth which resulted in the unceremonious exit of the chief coach Cedric D'Souza mid-way through the tournament.

With the exception of the mercurial striker, Pillay, and a couple of youngsters, the rest of the team failed to put up a decent show that saw the side failing to take the top three positions in important tournaments.

The unheralded women's team, on the otherhand, saw a fluctuation of fortunes throughout the year.

Playing with determination and purpose, the eves proved every one wrong by winning the gold medal in the Commonwealth Games in Manchester before fizzling out in the Busan Asian Games, finishing last in the four-nation competition.

The 35-year old Pillay, who was the player of the tournament in the Champions Trophy in Cologne, Germany and nominated for the FIH player of the year award, was in the news for all the wrong reasons.

Pillay was in the midst of a storm when he abused and pushed the umpires during the final of the Nehru Cup hockey tournament here last month. Playing for Indian Airlines against Punjab Police in the final, the star player pushed and threatened the umpires after being unhappy with a decision.

The player from Maharashtra also got into trouble for blaming his national team-mates from Punjab for not helping him to play upto his potential during the Champions Trophy even though India finished fourth and he was adjudged the best player.

India's two wins against Pakistan -- in Champions Trophy and in the Asian Games -- endeared the team to millions of fans back home even though it failed to finish on top in both the tournaments.

While the team managed a fourth-place finish in the six-nation tournament in Cologne, it came second behind hosts South Korea in the Asian Games.

The side's biggest disappointment came in the sports mega event held in Kuala Lumpur in February-March in which India lost most of their matches to finish even behind teams considered minnows in the international circuit.

Though India won against Cuba and Poland in the league encounters and drew against Japan, they lost four matches, against South Korea, Malaysia, England and Australia for a 10th place finish in the 16-team competition.

The performance in the World Cup irked the union government so much so that the then Sports Minister Uma Bharati directed her ministry to look into the side's debacle.

"India's showing in the World Cup has left a lot to be desired. I have always maintained that every authority has to be accountable. I can assure you that - haathi ki galti ke liye chuhe ko saza nahin milegi," she had said.

India, however, bounced back to their winning ways in the next major tournament, emerging runners-up in the four-nation event held in Adelaide and Melbourne in May-June.

Taking revenge for their losses in the World Cup, India beat Malaysia and South Korea in the league encounters before getting a 0-6 drubbing in the final against Australia.

In the next tournament, India's preparation for the Champions Trophy suffered a big jolt when they failed to win even a single match in the Rabobank four-nation hockey meet in Amstelveen, Netherlands in August. They were comprehensively beaten by the hosts and Australia and held by South Korea for a 2-2 draw to finish at the bottom of the table.

In the August-September Champions Trophy, though India managed a fourth-place finish, they won one and lost one against arch-rivals Pakistan in what were billed as the matches of the tournament.