Police is probing the video. 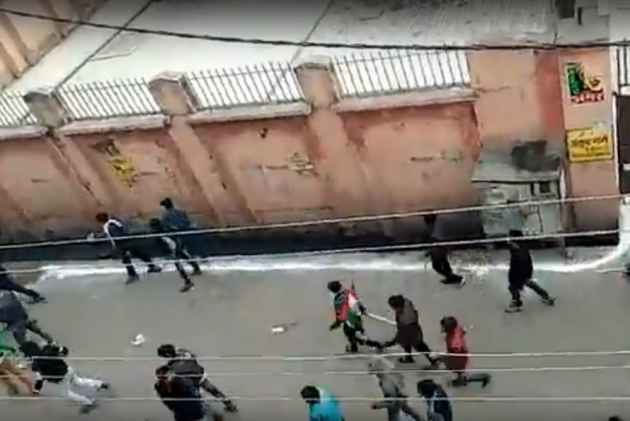 Uttar Pradesh police is now probing a new video allegedly from violence-hit Kasganj that shows a group of 'Hindu youths'-- holding swords and guns-- as they march towards a Muslim dominated area. The video clip that was shot from roof of a tehsil office moments before clashes broke out in the two communities, has been doing rounds on social media, reported The Times of India.

The group of aggressive men is seen holding guns, clubs and sticks as the move ahead in a narrow street. Another can be spotted marching on with 'Tiranga' (flag). Visuals of 22-year-old Chandan Gupta participating in the "Tiranga Yatra" is also among the clips, reported the NDTV.

The police are investigating the authenticity of the video.

The clash broke out after an unauthorised bike rally was taken out by RSS-affiliated students' group Akhil Bharatiya Vidyarthi Parishad and the Vishwa Hindu Parishad (VHP) in the city to commemorate the 69th Republic Day.

As the procession reached minority community-dominated Baddunagar, stones were pelted and guns were fired. "In this (firing), Chandan was killed and Naushad was injured. Naushad was referred to Aligarh for treatment," it said. Another man, identified as Akram, received head injuries.

Till now, 7 FIRs have been lodged related to the clash and over 100 arrests have been made as the town remains on the edge.

Chief minister Yogi Adityanath on Tuesday promised action against those involved in the violenece as the Home Minister Rajnath Singh ordered situation report. Deputy Chief Minister Keshav Prasad Maurya described the violence as unfortunate, and said the people behind it would not go unpunished.