The three-member probe team have apparently conflicting views as one member has cited technical glitch as the reason for the air accident while another has blamed pilots for the lapse. 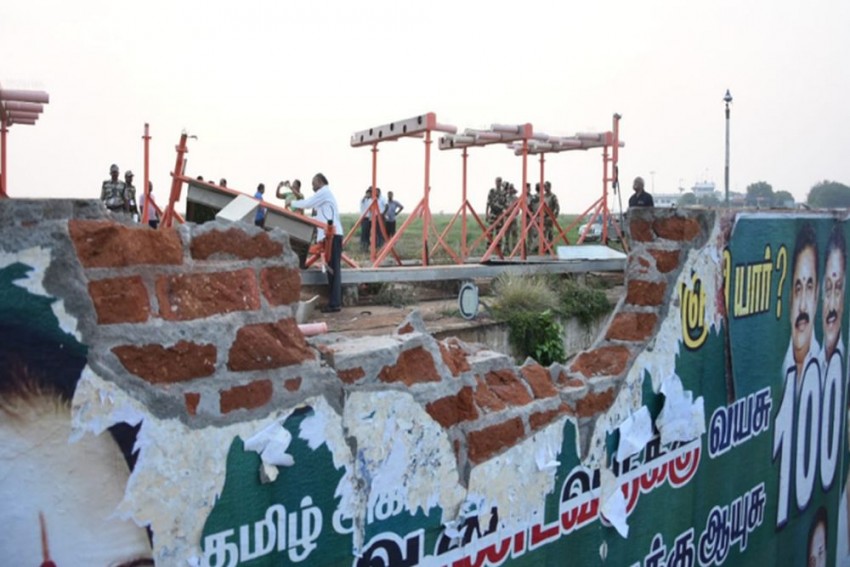 Members of a probe team constituted almost two years ago to investigate the air accident at Trichy International airport on October 12, 2018, are apparently at loggerheads in fixing the responsibility for the incident.

The Air India Express plane, carrying 136 passengers, had a narrow escape when it hit the boundary wall of the Trichy International airport while taking off to Dubai on October 11, 2018.

It landed safely at the Mumbai airport when the ATC intimated the two pilots who were unaware of the brushing off and continued flying for about two hours. The aviation regulator Directorate General of Civil Aviation (DGCA) immediately suspended the licence of the two pilots for three years without issuing any show-cause notice.

Sources have confirmed to Outlook that the three-member probe team, constituted soon after the incident, have apparently conflicting views as one member has cited technical glitch as the reason for the air accident while another member has blamed pilots for the lapse.

“It is due to this reason why the AAIB is keeping quiet on the report of an incident that took place almost two years ago. This is not only jeopardising the career of two pilots but it has thrown all air safety norms to the wind,” the source said.

One of the pilots, Captain D Ganeshbabu, challenged his suspension in the Madras High Court on May 23, 2019, and pleaded innocence and the court asked the DGCA, AAIB and the Ministry of Civil Aviation to respond.

DGCA, in its repose, told the court that preliminary investigation suggested pilots’ fault and rest was being investigated by the AAIB.  The AAIB and the Ministry of Civil Aviation haven’t filed any reply yet. In the most recent hearing, held on July 1, they sought more time to file affidavits.

Ganeshbabu told the court that the cause of the incident was a faulty recline seat which collapsed moments before the take-off when the aircraft was at 110 knots (203 km/h) speed. He said that he immediately adjusted his seat. He felt a slight shake on taking off which was not unusual. Neither cabin crew nor any passenger reported any abnormal vibration or noise.

Aviation experts say that it is a case of blatant violations of air safety norms both by AAIB and the aviation regulator Directorate General of Civil Aviation.

DGCA’s procedure manual regarding suspension says, “In order to meet the end of natural justice, a Notice of Suspension to the alleged offenders shall be required to be issued, whether or not it is legally binding and obligatory.”

“The charge is required to be mentioned in the Notice and appropriate time should be given to submit his explanation,” it adds.

Ganeshbabu in his petition has alleged that neither he nor his co-pilot, Anurag, were given any such opportunities and both were arbitrarily suspended.

“What will happen to the morale of a pilot if the regulator makes him a scapegoat? What could be a bigger threat of aviation safety than this?” SS Panesar, a veteran pilot and air-safety expert asked.

He added, “I filed several RTIs to find the status of investigation in Trichy case and every time I got a similar reply that the investigation is in progress. The DGCA has refused to share any documents.”

Even AAIB too has compromised with its own rules and international safety norms. Out of three-member probe team - Amit Gupta, Dinesh Kumar Yadav and Captain Gaurav Pathak – Gupta and Yadav belong to DGCA. This formation of a probe team with experts from DGCA violates international air accidents investigation norms and India’s commitment to the International Civil Aviation Organisation that AAIB is independent of DGCA.

“Can a DGCA officer find fault in DGCA’s functioning? The purpose of AAIB is to separate the regulatory functions from the investigation as regulator’s negligence is one of the major causes of air accidents and incidents,” Panesar said.

Before the formation of AAIB on July 30, 2012, the DGCA used to investigate all the air accidents. However, aviation experts protested to separate investigation from DGCA. A committee formed by the government in the 1990s, under the Chairmanship of Air Marshal JK Seth, stated that the DGCA couldn’t be a prosecutor, a jury and a judge in a case against its own.

Further, ICAO’s investigation norms say that the final report of the investigation should be released in the shortest possible time and, if possible, within twelve months of the date of the occurrence.

“If the report cannot be released within twelve months, the State conducting the investigation should release an interim report on each anniversary of the occurrence, detailing the progress of the investigation and any safety issues raised,” ICAO’s Annex 13, that outlines the process of aircraft accident and incident investigation, says.

“Since the probe started in October 2018, AAIB has not even once released any interim report in this case. It is not even apprising the court about the status of the investigation,” said a safety expert requesting anonymity as he is associated with AAIB.

Children May Have Both COVID-19 Antibodies, Virus In Their System Simultaneously: Study