The DMK-led front, which also comprises Congress and the IUML, is set for a clean sweep and is poised to win 37 of 38 Lok Sabha seats in Tamil Nadu with the lone seat appearing to go to the AIADMK. 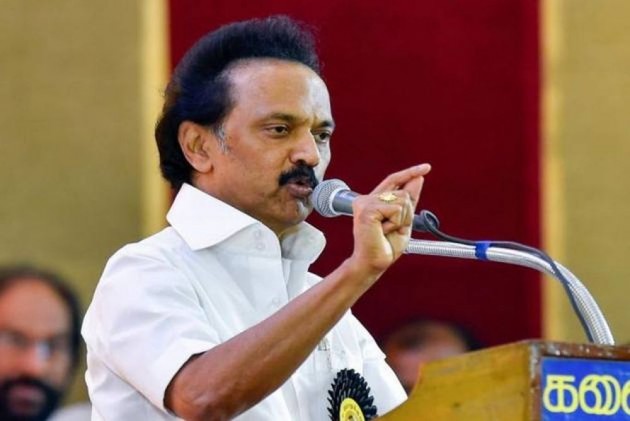 Assiduously working for a grand victory through the years, DMK President M K Stalin single-handedly steered his party through the long night, sweeping the Lok Sabha elections in Tamil Nadu after back to back poll debacles.

The DMK-led front, which also comprises Congress and the IUML, is set for a clean sweep and is poised to win 37 of 38 Lok Sabha seats in Tamil Nadu with the lone seat appearing to go to the AIADMK.

The DMK lost the 2011 and 2016 Assembly polls and 2014 Lok Sabha elections. DMK appears set to win in all the 19 constituencies it fought and its allies MDMK, VCK (Villupuram), KMDK, and IJK who fought on the Rising Sun symbol of the Dravidian party are also likely to win in view of the huge margins, taking the Dravidian party's total tally to 23 seats.

Allies Congress is set to emerge victorious in 8, IUML and VCK (Chidambaram) one each and CPI and CPI(M) two each. Seeking the early bird advantage, 66-year-old Stalin launched DMK's village level outreach programme (Ooratchi Sabai) across Tamil Nadu as early as January, with the slogan "let us meet the people, tell them and win over their hearts."

The campaign, which saw coverage of over 12,000 village panchayats, was a pretty unconventional affair with Stalin interacting with people in the village square, often seated on a platform under the shade of a tree.

Meticulously, he sought to address all the local issues and promised resolving them once voted to power. He also made it a point to meet people during morning walks, visit local markets and parks to interact with people.

Apparently taking cognisance of Jayalalithaa's charisma and the womenfolk's formidable support for her, Stalin repeatedly assured the people that once his party wrested power, "all those responsible for her death" would be brought to book.

The Tamil Nadu government had ordered a Commission of Inquiry to go into the circumstances surrounding Jayalalithaa's death.

Perhaps for the first time in DMK's history, Stalin asserted during his poll campaign that his party was not anti-Hindu to ensure that believers were not antagonised. He even said his wife offered worship in temples every day.

In the DMK manifesto, Stalin made several attractive assurances like waiver of crop loans for farmers and later assured waiver of loans availed by landless poor farm labourers through pledging gold ornaments (from one to 40 grams).

He pitchforked Rahul Gandhi's name for the office of the Prime Minister and stuck to it despite murmurs against it from within the UPA and made it a poll plank too.

Neither did Stalin's avowed objective of making Gandhi the Prime Minister materialise nor his goal to storm to power in Tamil Nadu by winning bypolls to all the 22 Assembly segments despite persistent efforts.

With perceived anti-incumbency coming in handy, he picked up every issue, be it the heist case involving late Jayalalithaa's Kodanad bungalow, dengue deaths two years back, and last year's Tuticorin violence to corner the arch rival.

Stalin's field work to usher in an electoral turnaround in Tamil Nadu for DMK was consistent since 2014, irrespective of the outcome in elections and in 2015 he launched his "Namakku Naame Vidiyal Meetpu Payanam" (We for ourselves, journey to retrieve dawn) campaign.

Going in for a complete image makeover, he sported bright formal outfits and sunglasses, hopped on to a scooter or abicycle, met people in buses, trains and other public places and sipped tea in roadside stalls with commoners.

While his campaign which then had effectively targeted late Chief Minister J Jayalalithaa, it could still not catapult his party to power in 2016. His only solace was that his campaign helped propel the DMK to emerge as a strong opposition party with 89 MLAs and allies Congress and IUML won eight and one seats respectively.

Though AIADMK had made fun of his campaign, saying "he does not remove his sunglasses even in the dark," Stalin kept on improvising and came up with other campaigns like "Pesalam Vanga" (Come Let us Talk), similar to Prime Minister Narendra Modi's "Chai pe Charcha."
In 2017, he embarked on a month-long outreach campaign across Tamil Nadu to highlight the "failures" of the AIADMK regime.

All along, he mounted pressure on the AIADMK government both inside and outside the Assembly over a slew of corruption allegations against Chief Minister K Palaniswami and other Ministers.

Deftly handling the fissures in the party due to rivalry with his sibling M K Alagiri in 2014, he demonstrated he could manoeuvre the party out of it by ensuring that his brother was eased out of the outfit, sans any repercussions. Alagiri's rally here last year, billed as a "massive show of strength" to press for his re induction in DMK, ended up as a damp squib, miserably failing to take on Stalin.

The former Union Minister had challenged Stalin, asking if the DMK was a "mutt" where a senior pontiff could anoint his junior.  Stalin showed patience when his father and party patriarch M Karunanidhi refrained from formally anointing him as party president and Chief Ministerial candidate in the 2016 Assembly polls despite saying more than once that Stalin would be his successor.

He bided his time though his name was doing the rounds as early as 2007 when he was expected to be named "successor" at a party youth wing conference in Tirunelveli. Stalin was also meticulously groomed by Karunanidhi, both in the party and the government and was made Deputy Chief Minister during the previous DMK regime (2006-11).

Born March 1, 1953, Stalin campaigned for DMK in the 1967 elections as a 14-year old school student. He was incarcerated under MISA in 1976. He became party's youth wing Secretary in 1984, and held that post for decades.