Goa-based dentist Rachna Fernandes, who was dining at the restaurant along with relatives, said that the mother-son politician duo were having a quiet lunch, with no security guards present. 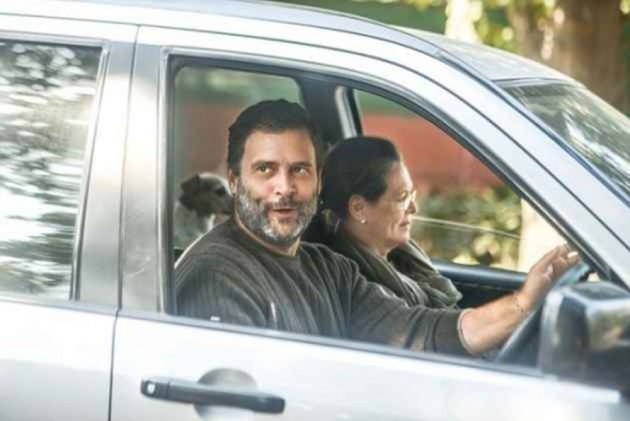 Holidaying in Goa after a turbulent winter session of Parliament, Congress President Rahul Gandhi surprised patrons at the popular Fisherman's Wharf restaurant in South Goa, where he arrived for a Sunday lunch with his mother and former party President Sonia Gandhi.

Rahul who was wearing a blue t-shirt, also posed for photographs and selfies with patrons of the seafood restaurant, who had arrived for a quiet lunch on Sunday.

Goa-based dentist Rachna Fernandes, who was dining at the restaurant along with relatives, said that the mother-son politician duo were having a quiet lunch, with no security guards present.

"When I asked him for a photograph with him, he said he would oblige after he settles the bill," Fernandes said.

Once the bill was paid by him, Rahul offered to take a picture with her.

Goa: Congress President Rahul Gandhi at a restaurant in South Goa yesterday, where he had lunch with his mother Sonia Gandhi. (Pic courtesy: Dentist Rachna Fernandes - in pic with Rahul Gandhi) pic.twitter.com/D1YWyrdlfl

"He is too nice to be in the bad, bad world of politics," Fernandes told IANS.

Rahul and his mother are on a three-day holiday in Goa.

According to a Goa Congress spokesperson, the party President and Sonia Gandhi are on a "private visit" and there are no official engagements scheduled during his stay in Goa at a five-star resort in South Goa.