The gates of the NGO, Women’s Economic and Social Think Tank (WESTT), which sent out the invitation on PMO's behalf claiming that Modi wanted to meet the MEPs as “influential decision-makers from the European Union”, are shut. 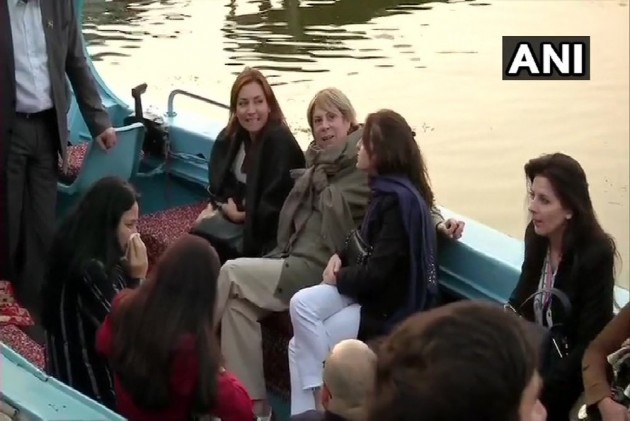 The European Union Parliamentarians, who toured the state of Jammu and Kashmir to assess the ground situation, were invited by an NGO and promised “prestigious VIP meeting” with Prime Minister Narendra Modi, an English daily, which accessed the invites, reported on Wednesday.

The government has been in the eye of a storm ever since a delegation of 29 MPs, in their personal capacity, arrived in the national capital and met the prime minister and National Security Advisor (NSA) Ajit Doval before proceeding with their visit to the Valley on Tuesday.

However, the gates of the NGO, Women’s Economic and Social Think Tank (WESTT), which sent out the invitation on PMO's behalf claiming that Modi wanted to meet the MEPs as “influential decision-makers from the European Union”, are shut, NDTV reported.

Not Here To Interfere In India's Internal Issues: EU MPs After Kashmir Visit

The NGO's link to the Prime Minister's office or even the government is still not clear. The Hindu also said that its attempts to reach out to the woman, Madi Sharma, who sent invites and then accompanied the MEPs to the PM office, failed.

“I am organising a prestigious VIP meeting with the Prime Minister of India, His Excellency Narendra Modi and it is my privilege to offer this invitation to you,” Sharma said in the invite.

The Ministry of External Affairs (MEA), too, on Wednesday clarified it was "not involved and not coordinating the visit".

That's not all. Not only has the Opposition called the visit into question but also asked why domestic leaders were being barred from going to Jammu and Kashmir. On top of that, the political parties these MEPs represent in their respective countries, too, has become a subject of discussion. AIMIM chief Asaduddin Owaisi on Tuesday launched a scathing attack on the government, saying "Nazi lovers" were visiting the Valley, alluding to the "far-right" antecedents of their political outfits.

On Wednesday, the MEPs said they do not want to interfere in the internal matters of India, referring to abrogation of Article 370.