Congress leader Rahul Gandhi alleged that after the defence minister's statement, it is clear that the prime minister has 'misled' the country about the Chinese aggression at the border. 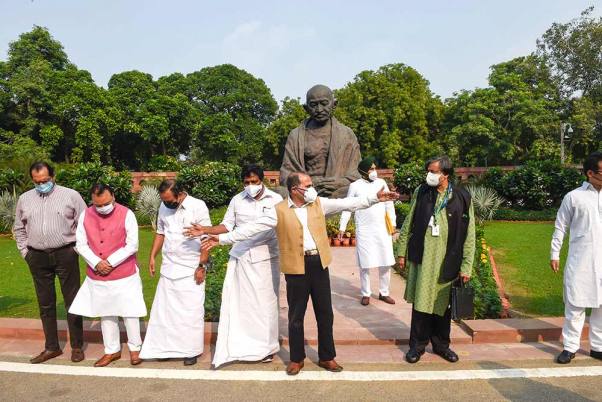 The Congress on Tuesday accused the government of shying away from debating the Ladakh standoff issue in Lok Sabha and questioned the absence of Prime Minister Narendra Modi from the House.

Members of the Congress walked out of the Lok Sabha and staged a protest in front of the Mahatma Gandhi statue in the Parliament House complex after they were not allowed to speak following a statement by Defence Minister Rajnath Singh on the border standoff with China in eastern Ladakh.

Congress leader Rahul Gandhi alleged that after the defence minister's statement, it is clear that the prime minister has "misled" the country about the Chinese aggression at the border.

"It is clear from the statement of the defence minister that Modi ji misled the country on Chinese intrusions. Our country has always stood and continues to stand behind the Indian army. But Modi ji, when will you stand against China? When will you take back our land from China? Don't be afraid of naming China," Gandhi said in a tweet in Hindi.

Making a statement in Lok Sabha, Defence Minister Singh had said he would not hesitate to share that India is facing a "challenge" in Ladakh but at the same time added that the House should have "full confidence" that the armed forces will always rise to the challenge and make the country proud.

Firmly articulating the country's position on the tense border row in eastern Ladakh, he said Beijing has been very clearly conveyed that any attempt to "unilaterally" change the status quo along the Line of Actual Control is not at all acceptable.

"I will not hesitate to share with this august House that we are facing a challenge in Ladakh and I urge the House to pass a resolution in support of our armed forces who have been defending our motherland at great heights and most inclement weather conditions," Singh said.

Congress' leader in Lok Sabha Adhir Ranjan Chowdhury said leaders of the party wanted to speak in Lok Sabha in support of the armed forces and their bravery, but were not allowed to do so.

"The country is supreme for our Congress party and we take pride in the bravery and courage of our armed forces. We wanted to speak in favour of our armed forces and had sought only one minute, but were not allowed to talk. There are many questions but we know that this government does not want to answer any," he told reporters.

"We wanted to see the same tradition carried forward, but we know that this government is not willing to discuss the China matter in Parliament," he said.

Congress chief spokesperson Randeep Surjewala said the entire country is proud of the Indian army and “we are safe only because the armed forces are standing against the Chinese at the borders”.

"But where is the prime minister. Why has the prime minister run away from admitting in Parliament the failure of the political leadership. Has China captured Indian territory? Depsang plains, Pangong Tso Lake, Lipu Lake and Y-Junction, has there been any transgression by China?" he asked.

Surjewala asked how many kilometres has China captured and when will Prime Minister Modi throw out the Chinese from Indian territory.

"Modi ji you should come to Parliament and say sorry. Modi ji when will you show your red eyes to the Chinese. Don't hide behind the bravery of our armed forces. The prime minister has run away from Parliament," he said.

Congress leader Chowdhury said the defence minister has been showering praises on Modi, but when a resolution is passed in Lok Sabha in support of the armed forces, at least the prime minister should have been present.

"PM does not have an answer and the government fears from holding a discussion in Parliament on the issue," he said, adding that it is incumbent upon the government to express before the nation what is actually transpiring along the border.

Asked whether the government should go in for a military option, Chowdhury said there are many options to resolve the issue and discuss it.

He said that talks and discussions have been taking place, "but still we have failed to yield the desired results due to the machination played by the Chinese".

Congress’ deputy leader in Lok Sabha Gaurav Gogoi said, "We have walked out (of Lok Sabha) in protest because the Congress party wanted to send a message of solidarity to our Indian army and our brave troops.”

“Yesterday, the prime minister spoke outside Parliament and said we should all speak in one voice and that is what we wanted to speak in Parliament," he said.

The Congress wanted to send a message of solidarity to the armed forces and a strong warning to China that they should not test the country’s patience, Gogoi said.

Unfortunately, this government feels that only it can speak in support of the army and the Congress and other political parties do not have the right to speak, he said, adding that the army belongs to all and everyone is proud of it.

"But no doubt there was an intention behind silencing the Congress party because the prime minister does not want to answer certain tough questions... When his own minister was making a statement on China, the prime minister should have been there. The PM's absence is a signal," Gogoi said.