It is not yet clear if he was killed in police firing. The police maintained a studied silence on the incident. 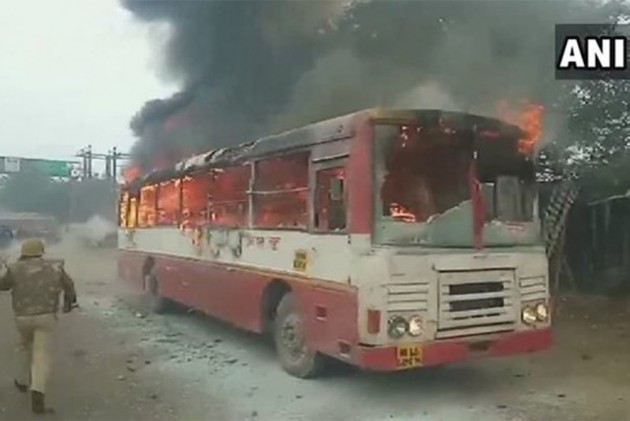 One person has died, allegedly due to a firearm injury, during the violent protests against the Citizenship Amendment Act in Lucknow on Thursday.

The deceased, according to sources, has been identified as Mohd Wakeel, a resident of Sajjad Bagh in Hussainabad area, IANS news agency reported.

It is not yet clear if he was killed in police firing.

"That is for the forensic experts to decide what kind of bullet took his life. He came here with a bullet injury in the stomach and we tried to save him but he succumbed to the injury," said a doctor in the Trauma Centre of the King George's Medical University.

The police maintained a studied silence on death.

Anti-citizenship law protesters went berserk in parts of Lucknow, hurling stones and damaging police outposts and a number of vehicles mainly in the Old City areas of the Uttar Pradesh capital, forcing police to use tear-gas shells to control the situation.

The protesters torched a state-run bus at Parivartan Chowk, close to the district magistrate's office, and set on fire a police post in Satkhanda area.

Another police post was damaged in old Lucknow's Madeyganj, where police fired tear-gas shells after protesters smashed vehicles parked outside a police post. About 20 people were taken into custody.

When protesters in other parts of Lucknow hurled stones at police, they were lathicharged. In several areas, including Hasanganj, policemen had a tough time tackling the protesters, who adopted a hit-and-run tactic, officials said. A few policemen were injured in the violence.

At Parivartan Chowk, which appeared to be the epicentre of the agitation, policemen faced brickbats and the van of a television crew was damaged. Smoke was billowing out of the vehicle.

The gates of the nearby KD Singh metro station were shut to keep protesters from gathering at Parivartan Chowk.

The violence against the amended law led to panic among residents and forced traders in many markets, including the busy Hazratganj area, to shut their shops.

TV footage from different parts in the capital showed large areas strewn with brickbats, bearing the signs of the clashes between the police and the agitators. Many stone-pelters had their faces covered with masks or handkerchiefs.

"We will ensure that those who damaged property compensate for the loss," he said.

Taking a strong note of the violence, Chief Minister Yogi Adityanath warned his government will exact "badla" (revenge) on those involved in damaging public assets by "auctioning" their properties to compensate for the loss.

"There is no place for violence in democracy. In the name of opposing CAA, Congress, SP and Left parties have pushed the entire country into the fire. There was violence in Lucknow and Sambahal and we will deal with it strictly. All properties of those involved in damaging public assets will be seized and auctioned to compensate for the loss," Adityanath said.

UP government spokesperson and senior minister Shrikant Sharma said it was "highly unfortunate" that the opposition parties were "misleading" people, particularly the students, and urged them to cease doing so.

(With IANS and PTI Inputs)