Nitish Should Return To Grand Alliance To Work Freely: Congress

The Grand Alliance had come into being ahead of the 2015 assembly elections when Kumar had joined hands with his arch rival, RJD supremo Lalu Prasad. 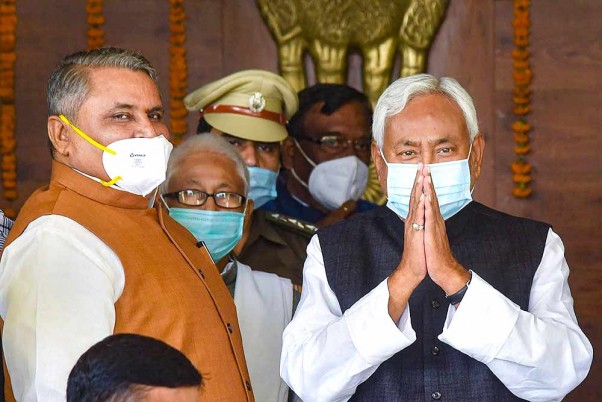 The Congress claimed on Sunday that Bihar CM Nitish Kumar appears to be under "a lot of pressure" in the BJP-led NDA, and he should consider returning to the Grand Alliance to work "freely" for the development of the state.

A statement was passed by Congress Legislature Party leader Ajeet Sharma, but was was promptly dismissed by the RJD as being "not official". RJD helms the five-party opposition coalition in Bihar.

Sharma made the remark referring to the much-televised quarrel between Kumar and journalists here last week when the chief minister, known for his prim conduct, let his guard down and gave vent to his frustration at being rankled over a high-profile murder case.

"Nitish Kumar is never known for such behaviour. We all know that. He is obviously under a lot of pressure in the NDA. It is well-known that he is under pressure to give up the all-important home portfolio, which he has been keeping with himself," the Congress leader said.

Nearly a month ago, former Union minister Sanjay Paswan, a known detractor of Kumar in the BJP, had suggested that he give up the Home portfolio, since it was "too demanding" for the 69-year-old.

Paswan had, however, qualified his statement clarifying he was not insisting that the department, which controls the police, be given to the BJP and that Kumar could choose a "more energetic" colleague from his JD(U) for the job.

The NDA in Bihar at present comprises four parties, including smaller allies HAM and VIP.

Sharma, who represents Bhagalpur in the assembly, added "the Grand Alliance is Nitish Kumar's old home. He will be able to freely work for the state's progress if he chooses to return".

The Grand Alliance had come into being ahead of the 2015 assembly elections when Kumar had joined hands with his arch rival, RJD supremo Lalu Prasad. The Congress was accommodated as a junior partner and the coalition went on to register a handsome victory.

However, differences with the RJD led Kumar to exit the coalition in July, 2017 and make an abrupt return to the NDA, which he had quit four years earlier following his disapproval of Narendra Modi's ascendance in the BJP.

Tejashwi Yadav, the RJD's heir apparent and leader of the opposition coalition, however, testily rejected Sharma's remark when asked about the same at Saran, where he went to meet bereaved family members of Rupesh Kumar Singh, a station manager of private airlines whose murder in the state capital has been making headlines.

"This is not an official statement (of the Congress)," said Yadav.

With a theatrical flourish, Yadav said "it is my request to the chief minister with folded hands please act and do not let people of your state die like insects".

"I understand you are a kamzor (weak) chief minister," he added, in a tongue-in-cheek reference to the slump in JD(U)'s tally in the assembly, which has been coterminous with the rise in BJP's strength in a state where it has, so far, played second fiddle to Kumar.

Yadav also threatened to stage a march to Rashtrapati Bhavan along with opposition legislators "if law and order situation does not improve in a month".

He charged the Congress with having "given up on Mahatma Gandhi's emphasis on virtue" and capitulated before the RJD, which was "synonymous with corruption", an allusion to various cases involving Prasad serving sentences in fodder scam and other members of his family.