The victim's family in Aligarh alleged that he died as he had stopped eating because he was given barely boiled rice which he was unable to eat. 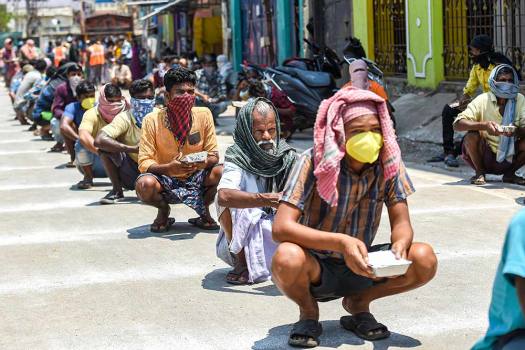 A 42-year-old migrant worker, who was stranded at a relief camp in Uttarakhand's Roorkee, has died, with the family alleging that he died due to starvation.

A magisterial inquiry has been ordered into the death of Netrapal who hailed from Aligarh.

Netrapal's family in Aligarh alleged that he died as he had stopped eating because he was given barely boiled rice which he was unable to eat.

'My Mother Is Dead. I Am Stuck In Coronavirus Lockdown': Bihar Labourer Cries For Help In Delhi

The victim worked at a hairdressing salon in Rishikesh and had come to Uttar Pradesh to meet his family on Holi. He left for Rishikesh again on March 18.

Ajay said when the lockdown was enforced nationwide, Netrapal became jobless and decided to walk back to Aligarh on March 28.

After a day's walk, he decided to take shelter in a village near Roorkee where the pradhan provided him with a meal.

But a little later police took him away to a relief camp in Roorkee, Ajay said.

He added that his father last called him on April 15 and complained of a stomachache.

Haridwar District Magistrate C Ravishankar said the labourer died at the relief camp set up at Grand Vedantam Banquet Hall in Roorkee on April 16. He said a magisterial probe has been ordered into the incident.

“Joint Magistrate Roorkee has been assigned to probe the incident. He has been asked to submit a detailed report in a fortnight,” he said.

A police official in Rishikesh said Netrapal's postmortem was conducted at AIIMS, Rishikesh, adding the reports are yet to arrive.

The victim's son also accused the Roorkee police of not informing the family about his father’s death. He said another inmate at the relief camp informed the shocked family, residing in Azadnagar colony in Aligarh, that Netrapal had died.

"They (Roorkee police) kept assuring us that the body of my father was being sent, but it arrived in Aligarh on the midnight of Friday," he said.

He said his father was the sole breadwinner of the family.

Netrapal is survived by his wife and five children, according to Ajay.

He also said the Aligarh DM promised to do whatever was possible to help the distraught family members.

"We have hardly eaten anything since Friday morning, but the DM has assured us that all our basic needs would be urgently met,” Ajay said on Saturday.

Zamirullah Khan said the Uttar Pradesh government should immediately grant an ex gratia compensation to the family which, he said, would also starve to death if immediate assistance is not provided to them.

He alleged the victim had died of “starvation and gross negligence on part of the authorities in Roorkee".

“The state governments of Uttar Pradesh and Uttarakhand should jointly give Rs 25 lakh for each daughter of the deceased,” the former MLA demanded.

Aligarh mayor Mohammad Furquan, who is from the Bahujan Samaj Party, also demanded a thorough investigation into the incident.