The Ministry said both sides have agreed that it was essential to maintain enduring peace in border areas for overall development of ties. 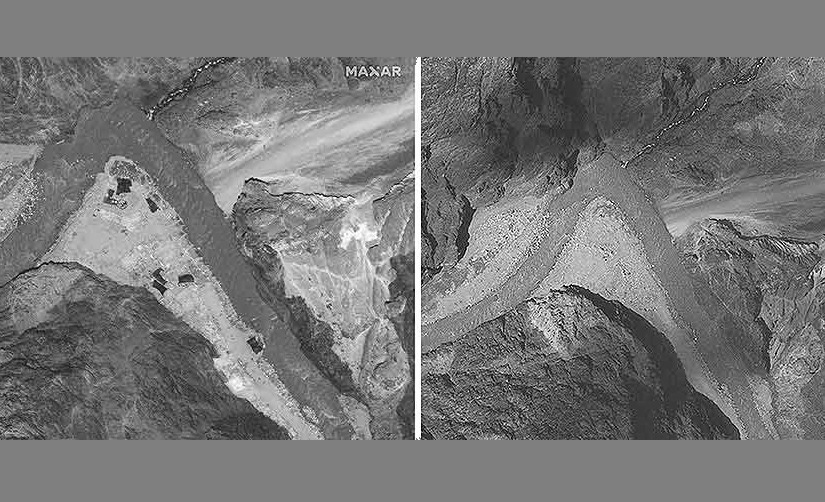 Satelite images provided by Maxar Technologies show the Galwan Valley along the disputed Indo-China border. June 28 image (left) shows that the Indians had built a wall on their side and the Chinese had expanded an outpost camp at the end of a long road, according to experts. July 6 image shows China and India appear to have dismantled recent construction on both the Indian and Chinese sides of a contested border.
AP Photo
Outlook Web Bureau 2020-07-10T19:36:13+05:30 Both India, China To Ensure Complete Disengagement Along LAC: MEA

India and China on Friday held a fresh round of diplomatic talks on the border row in eastern Ladakh and reaffirmed to ensure "complete disengagement" of the troops in the region for "full restoration" of peace and tranquility along Line of Actual Control.

The Ministry of External Affairs said the talks were held under the framework of Working Mechanism for Consultation & Coordination on India-China Border Affairs (WMCC).

"In diplomatic talks, India and China reviewed progress made in disengagement process along Line of Actual Control in western sector," the MEA said in a statement. Both the sides have agreed to maintain communication at diplomatic and military level to ensure early resolution of the situation at the border area, it said.

Senior army commanders of both India and China will meet soon to discuss further steps to ensure complete disengagement, the Ministry said.

It said the two sides reaffirmed to ensure complete disengagement of the troops along the LAC for "full restoration" of peace and tranquility in the border areas in accordance with bilateral agreements and protocols.

"They also agreed that for the overall development of bilateral relations it was essential to maintain enduring peace and tranquillity in the border areas," the MEA said.

The Indian and Chinese armies were locked in a bitter standoff in multiple locations in eastern Ladakh for the last eight weeks. The tension escalated manifold after a violent clash in Galwan Valley in which 20 Indian Army personnel were killed.

In the last five days, Chinese military has reportedly withdrawn troops from three friction points in line with a disengagement understanding with Indian Army.

Both sides have held several rounds of diplomatic and military talks in the last few weeks to ease tension in the region.