Karnataka Home Minister said he has given orders to initiate all the measures to recover losses from those who have caused the damage during the violence. 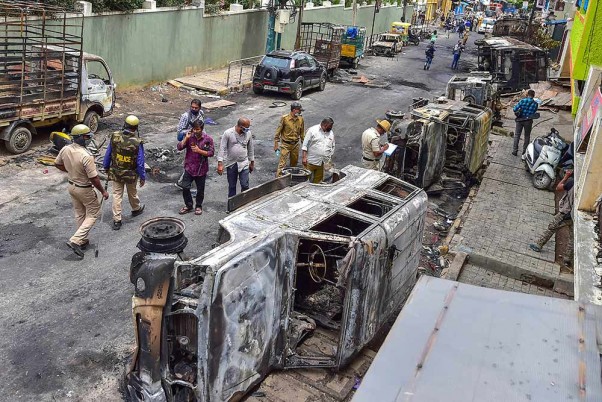 The Karnataka government has decided to conduct an inquiry into the violence in parts of the city last night, in which at least three people were killed and scores of others were injured, though a District Magistrate.

The government also decided to recover the losses arising from damage to public property during the violence, from the rioters, Home Minister Basavaraj Bommai said.

"...There are National Human Rights Commission guidelines for such a situation, as per which the inquiry will be conducted by the district executive magistrate.

This decision was taken at the meeting headed by the Chief Minister," Bommai said.

Speaking to reporters here, he said Chief Minister B S Yediyurappa reviewed the complete situation and the action taken by police.

The Chief Minister, who was discharged from a hospital on Monday after undergoing treatment for COVID infection, is currently under self-quarantine at home.

Ahead of the meeting with him, Bommai said the government has decided to recover the loss arising out of damage to public property and vehicles during the violence, by making those involved in such acts pay for it.

"We have come to a decision as per the Supreme Court order that when such riots take place and properties are damaged, the loss has to be recovered from those who have caused the damage.

I have given orders to initiate all the measures to recover losses from those who have caused the damage," Bommai said.

Speaking to reporters he said, buses, vehicles and properties were burnt In D J Halli and K G Halli police station limits. all those losses will be recovered from those who have done it.

"...there is media and CCTV footage," he said. At least three people were killed after police opened fire to quell a mob that went on a rampage, irked over a social media post allegedly put out by a Congress legislator's relative, as a city locality witnessed arson and violence.

Scores of persons, including around 50 policemen, were also injured in the violence that erupted on Tuesday night and continued till the wee hours of Wednesday, apparently prompted by the 'communally sensitive' online post.

Also, 110 people allegedly involved in the violence and the accused who posted the communal post have been arrested.

The Congress MLA's residence and a police station were among those targeted by the angry mob, prompting the government to issue a stern warning that rioting and law and order issues will not be tolerated.

An ATM was also destroyed in the violence. Earlier in the day Bengaluru South MP Tejasvi Surya wrote to Chief Minister B S Yediyurappa requesting him to confiscate the properties of rioters and recover losses caused to public property.

"I request Sri @BSYBJP to confiscate and attach properties of the rioters and compensate losses to public property in the same way as Sri @myogiadityanath govt did in UP.

Bengaluru is known for its peace and harmonious society. We must protect this strength of our city at all costs," he tweeted.