National 'As Long As There's Unruly Mob...': J&K HC Refuses To Ban Use Of Pellet Guns

'As Long As There's Unruly Mob...': J&K HC Refuses To Ban Use Of Pellet Guns

In September 2016 also, the High Court of Jammu and Kashmir had justified the use of pellet guns calling it as 'inevitable'. 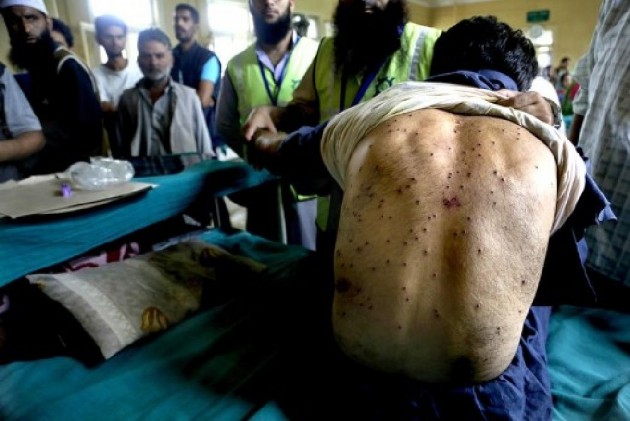 The Jammu and Kashmir High Court on Wednesday refused to ban the use of pellet guns for crowd control in Kashmir, its use is inevitable as long as there is violence by an unruly mob.

"What kind of force has to be used at the relevant point of time or in a given situation and place has to be decided by the persons in charge of the place where the attack is happening", the HC observed.

The Bar had in 2016 sought a ban on the use of pellet guns in Kashmir and sought sanction for prosecution against security officers for using pellet guns against protesters.

In Kashmir region, after the killing of 22-year-old militant commander, Burhan Muzaffer Wani, on July 8 last year, over 100 protesters were killed after the government forces fired bullets and pellets.

However, thousands of protesters were injured due to the pellets fired by the government forces.

According to the health ministry officials over 1,100 youths have got visually impaired due to the pellet gun injuries in their eyes and some of them have turned blind.

Responding to the petition of the Bar, which was seeking ban on pellet guns, the CRPF had told the JK High Court on August 17, 2016 that 3765 cartridges of 9 number had been fired from the pump-action guns since the July 8, 2016. With each cartridge contains 450 metallic balls, the CRPF have used 1.3 million pellets on protesters in two months.

The CRPF had told the court that pellet guns, introduced in 2010, are “riot control” weapons. “In case this is withdrawn from the options available with the CRPF, CRPF personnel would have no recourse in extreme situations, but to open fire with rifles which may cause more fatalities,” the CRPF had said in an affidavit.

In September 2016 also, the High Court of Jammu and Kashmir justified the use of pellet guns calling it as “inevitable.”