'Did you go to the Seth launch in Bombay?' I ask a friend who's moved to Sewer-by-the-Sea recently. 'Yes,' she replies, 'but, you know, it wasn't like a proper Delhi launch.'

What we don’t always realise is that, in Delhi, book launches have become an art form in a way they haven’t in any other city. ‘Did you go to the Seth launch in Bombay?’ I ask a friend who’s moved to Sewer-by-the-Sea recently. ‘Yes,’ she replies, ‘but, you know, it wasn’t like a proper Delhi launch.’ She cannot give me a substantative answer, save to say that in book launches the gossip should be about writers, critics, and who’s not having sex with whom, and not about SRK texting around seeking ‘advice’ from art-film types on how to handle his possibly forthcoming Oscars ceremony. 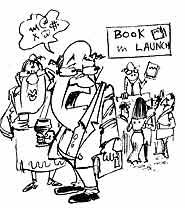 Despite her weary fuzziness, I realise my pal has hit upon something: in Delhi book do’s we give due prominence to the world of letters way above frippanceries such as Hindi films. In Delhi, we listen to the mandatory reading (and it has to be said, Vikram S is among the best in this minor regard) and then we get on with the real business. A scene at the launch of X’s new novel—Q: ‘So tell me, what do you think of it?’ A: ‘Her advance? Oh, it couldn’t have been for just one book, no way. That’s a three-book deal minumum: they bought her as a job-lot.’, ‘And the book itself?’ ‘My gawd...have you seen how the critics have panned it?’ ‘Have you read the book?’, ‘No, but I’ve read the website where he’s put up all the good reviews his family and friends have written for him. Each and every gushing SMS. Amazing.’ ‘Did you like the cover?’, ‘Well, that close-up of a cup of coffee is not quite my cup of tea, but you know what I really hate? I hate it that these people at (fill in any publisher) won’t ever give my books the kind of production they give her! Only because she’s sleeping with the head of marketing!’

The launch of Two Lives was a far less bitchy affair from where I stood, at least as far as the author went. The enormous goodwill our Vicky-boy has managed to win was strongly in evidence. The opprobrium was reserved for the village-idiot of a gossip-columnist who interviewed him and managed to get up even Seth’s usually equanimous nose; And for those spineless waiters who let the goras have a free run at the whisky before the bar was open while ferociously guarding it from the natives—a phenomenon that threatens to become something of a sub-theme in this column.