Kannada writer and former chairman of the Sahitya Academy, Prof. U R Ananthamurthy, is making a bid to enter the Rajya Sabha from Karnataka. But why is it that nobody is taking it seriously? 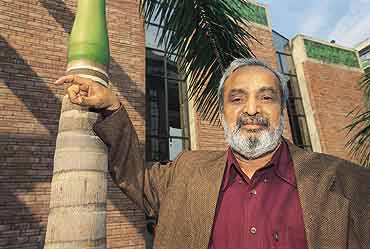 Kannada litterateur and Jnanpith laureate U R Ananthamurthy’s decision to contest the Rajya Sabha polls from Karnataka has not come as a surprise. His name was doing the rounds during the 2004 general elections and earlier too. In 2004 he had apparently expressed interest to contest the Bangalore South Lok Sabha seat against BJP’s H N Ananth Kumar, but the JD(S), with which party he is at loggerheads now, had offered him the Shimoga seat. For more than a decade now, there have been rumours on and off in the media that he has been "lobbying" to enter the upper house of Parliament. Having been a friend of many prominent Lohia-Socialists and claiming to be a fellow traveller of their ideology, political ambition was always dormant in Ananthamurthy. Even the literature he has produced has a readily identifiable political overtone. So, his decision to contest the polls has not surprised people, but what has indeed caused a flutter in many who subscribed to his liberal public voice, is the shrill chauvinistic reasoning he has offered to enter the electoral fray.

Ananthamurthy has declared that he is part of the "Kannada lobby" and in the 50th year of the state's formation he is trying to save "Kannada pride", which is being undermined by the BJP and the JD(S) who have fielded industrialist Rajeev Chandrashekar, a Telugu for the fourth Rajya Sabha seat from the state. Ananthamurthy’s chief complaint against his rival has been that he is an "outsider" to Kannada culture and that is a serious "disqualification". Among the people who have been instrumental in getting him to contest the polls is an MLA, Vatal Nagaraj, who has the reputation of painting non-Kannada boards black in Bangalore. Rebel JD(S) MLAs, headed by Siddaramaiah, are also on his side and he has the tacit support of the Congress too, but still the numbers are not adding up for a victory. He will need 45 first preferential votes to win in the March 28 elections. When reports last came in, the Congress camp too was having second thoughts about supporting the writer.

Only a few months ago, when Kannada activists painted the Belgaum mayor's face black for passing a resolution in the municipal corporation to secede from Karnataka and join Maharastra, Ananthamurthy had spoken loud, quiet rightly, about the "inclusiveness" of Kannada culture. Even when the classical language status was granted to Tamil by the Union government and local activists demanded a similar status for Kannada, Ananthamurthy presented a nuanced view of Tamil literature. He did not grudge Tamil’s classical language status, but pointed to its remarkable and ancient literary tradition. Even as early as 1982, when arguably the first and biggest "save Kannada" movement (Gokak movement) was held, Ananthmurthy said all those participating in it and forwarding a "narrow" Kannada cause were afflicted by "collective madness."

But now, to use the Shiva Sena-style logic of cultural "exclusion" is a complete turnaround. The streak of fundamentalism is, to say the least, shocking. Does this not sound similar to the communal splitting of the Indian society into Hindu "insider" and Muslim "outsider" by the BJP and RSS? It is difficult to believe that a writer and thinker of Ananthamurthy’s standing is unaware as to how complex an issue it is to determine who an absolute "insider" is to a culture? After all, has it not been the modernity project of post-Independent and democratic India to integrate the "insider" and "outsider" in our thoroughly caste-ridden and divisive society.

And more so in a globalised world, where migration is the order of the day, how can one comprehend the shallow logic of an "insider" and "outsider"? For that matter one of URA’s pet cultural theories has been about the "digestive" capabilities of Kannada culture. He has argued for years that Kannada culture over the centuries has always been open to influences and it displays such high degree of maturity and tolerance because it has had the discretion to accept and blend what would enrich it. So, what is it that has caused such a disturbing failure of reason and memory in Ananthamurty? Is it age or the pure seduction of power?

To take the argument further, what would have been Ananthamurthy’s fate if Keralites had protested against him as an "outsider" when he was appointed vice-chancellor of the Mahatma Gandhi University in Kottayam? What if Maharastrian’s had perceived him as an "outsider" when he was made chairman to the film and television institute in Pune? And what if Delhites grudged his appointment into one important cultural position after another in the 90s? After all how does Rajeev Chandrashekar who has lived in Karnataka for close to three decades; who has built a business empire that employed thousands of Kannadigas and even married a Kannada girl become an outsider? Will the bending and crawling Congressmen who have promised to spare their extra 19 votes to Ananthamurhty continue to support him if the logic of the "outsider" is embarrassingly extended to their supreme leader Sonia Gandhi?

Here’s a curious piece of information: To comply with the recommendations of the Sarojini Mahishi Commission, set up to study employment opportunities for Kannadigas in central government and public sector establishments, the government of Karnataka passed an order (No. SWL 70 ETX 77 Bangalore, dated 23 July 1981), which said that anybody who had resided in Karnataka for more than 15 years and were acquainted with the language were Kannadigas. If Rajeev Chandrashekar was put through this stringent test of domicile, he would still be considered an "insider".

The only point on which there is some intellectual agreement is Ananthamurthy’s statement that Karnataka has become a point of entry to the upper house for big businessmen. But this does not seem to be the point that Ananthamurthy is foregrounding in his election campaign. There is only a cursory mention of it. Only last year Deve Gowda fielded Chennai businessman and racing giant MAM Ramaswamy from the state. Vijay Mallya won earlier and now Rajeev Chandrashekar is poised for victory. Nobody is willing to ask as to what endears these big businessmen to professional politicians. A businessman making use of his proximity to the political system and leveraging business interests by holding public office is a larger question that one wished that a writer like Ananthamurthy would raise in public interest. But alas, that’s the domain of a public intellectual and that is something waiting to be reclaimed.

Ananthamurthy’s current position is rather piquant and unenviable. He is neither being supported by a winnable political combination nor is he being backed by his own community of writers. The fringe elements supporting him are simply scoring a political point at his expense. It must be a sad moment for the writer when nobody believes that he actually represents a cause.