In the first El Clasico match sans a Messi or a Cristiano Ronaldo in almost 11 years, fans sure felt the pain of missing the planets two superheroes, but they were treated to a Suarez show. 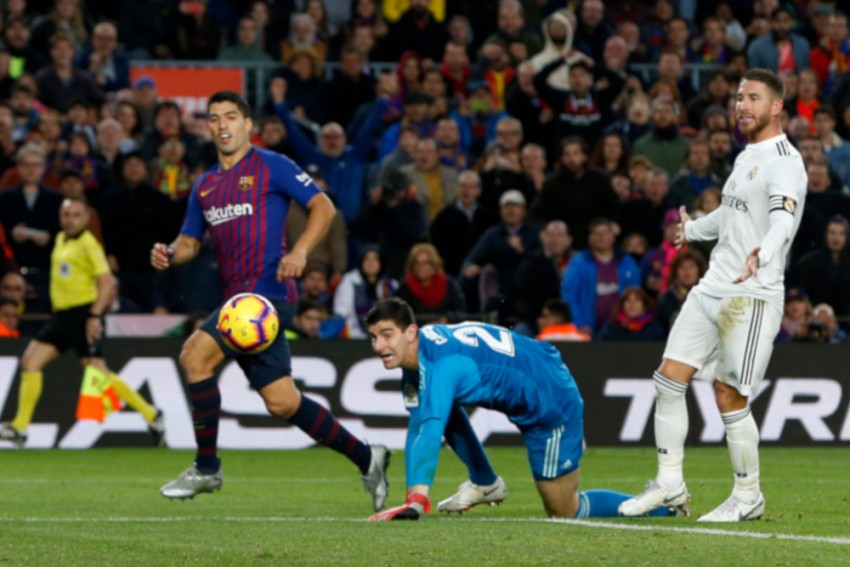 How many would it have been had Lionel Messi been fit? That's the overwhelming question on everybody's mind at the end of season's first El Clasico match between the two most extravagant clubs in world football. For the record, Barcelona put five past a sorry looking Real Madrid with a certain Luis Suarez scoring a hat-trick at Camp Nou on Sunday.

5-1 looked flatteringly deceiving, but the manner in which the defending champions went about creating chances, after chances even as their talismanic captain Lionel Messi watched from the stands with his kids, it was a good scoreline for the visitors in the Catalan capital.

The win helped Barca return to the top of La Liga table with 21 points from 10 matches with six wins and three draws, while Real Madrid, having tasted their fourth defeat in the last five outings, are just about the drop zone at 10th  with 14 points from an equal number of matches. This is Real's worst start to a season in 17 years.

In the first El Clasico match sans a Messi or a Cristiano Ronaldo in almost 11 years, fans sure felt the pain of missing the planets two superheroes, but they were treated to a Suarez show. Since his arrival in Spain, the former Liverpool player has always made himself available in the Clasicos. He had previously scored six goals in eight Clasicos in La Liga.

The Uruguayan striker scored three times, an unstoppable kick from the spot in the 30th minute, a majestic header in a volley-type header in the 75th minute and a clever chip in the 83rd minute.

Barcelona took an early lead in the 11th minute with Philippe Coutinho beating Thibaut Courtois from close range after a brilliant passing around game inside the box, but a Marcelo strike from a loose ball in the 50th minute made the contest alive.

Julen Lopetegui's side enjoyed a spell of domination after the restart. They even hit the woodwork six minutes after the Brazilian's equaliser as Luka Modric's curling attempt from just outside the box beat everyone but the upright. Five minutes later, Suarez too hit the woodwork as both the sides increased the attacking tempo to the delight of packed Camp Nou crowd.

But once Ernesto Valverde brought in Ousmane Dembele on for Coutinho in the 74th minute, Barcelona completely change the complexion of the match. The Frenchman, fresh and willing, ran riot in the midfield, and it took a minute to find the third goal.

And it was the start of a doomed outing for the most successful club in the world.

This was the first time they have conceded five goals in a competitive game since November 2010 (5-0 against Barcelona in La Liga). They are also winless in five league games, which also included a draw. In contrast, Barcelona are unbeaten in 42 league matches at home – 34 wins and eight draws – since their 1-2 loss to Alaves on September 10, 2016.