The Indian market is all set to get a diverse range of eclectic scooters designed to cater to various customers. We list down some of the most awaited ones 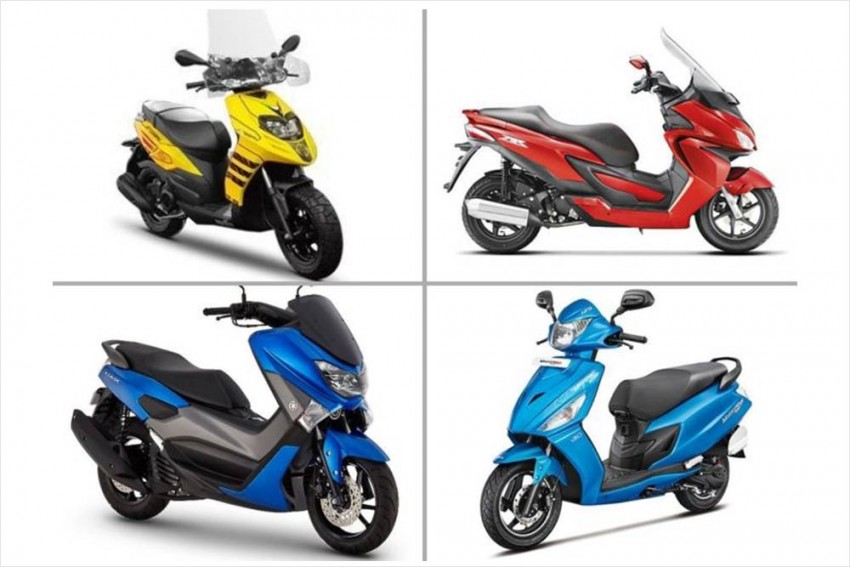 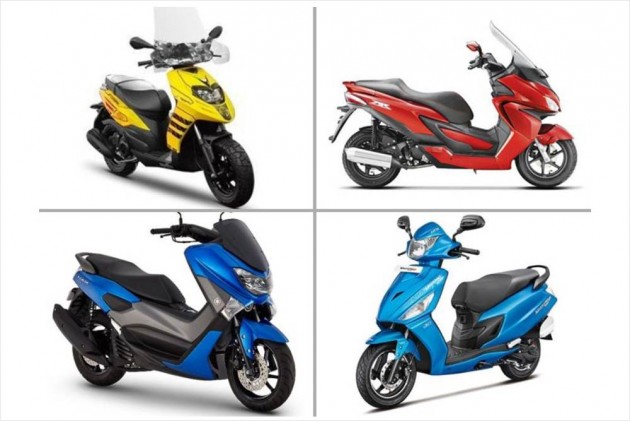 Scooters in India were initially considered as a no-nonsense means of transportation. Bajaj Chetak, TVS Scooty and Honda Activa are some of the finest examples of the same. However, the market now has matured considerably, thanks to the influx of modern-looking, feature-loaded, performance-oriented scooters that offer a good balance of fun and practicality wrapped in a reasonably affordable package. We round up some of the interesting scooters headed to our shores this year: 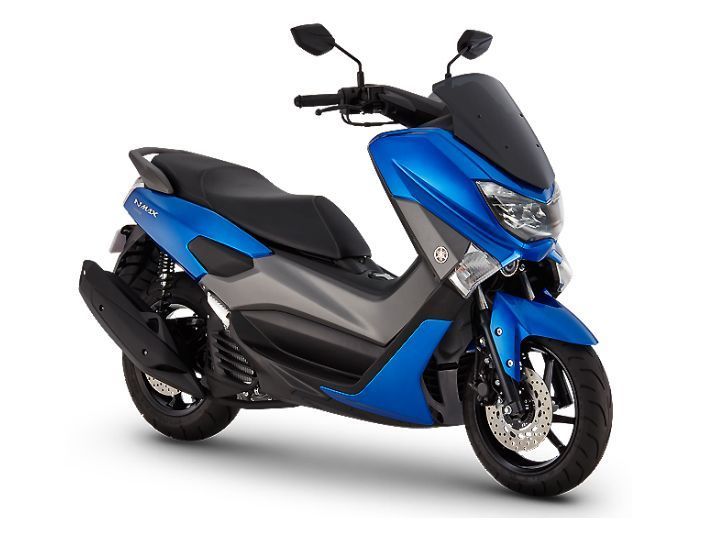 The response for sporty scooters like the Aprilia SR 150 and TVS NTorq 125 has been quite commendable in our market, sales wise. Looking to grab a piece of the pie in this segment, Yamaha is likely to launch the performance-oriented maxi scooter, the NMax 155 by mid 2019. The scooter employs a YZF-R15 V3-derived 155cc liquid-cooled engine with Variable Valve Actuation (VVA). Generating 14.8PS of power and 14.4Nm of torque, the NMax will surely give full-fledged 150cc motorcycles some stiff competition. Moreover, the scooter is also feature-loaded with digital instrument cluster, LED lighting, disc brake on both ends with ABS and the likes.

In Philippines, the Yamaha NMax 155 costs around Rs 1.5 lakh (converted figure). However for the Indian market, expect Yamaha to drop a couple of features and maybe tune the engine differently to price it competitively at around Rs 1 lakh (ex-showroom). 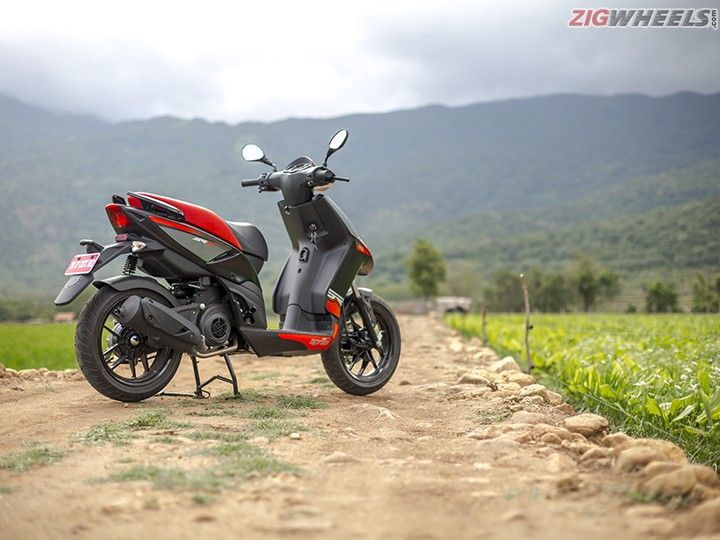 Aprilia’s parent company Piaggio is reportedly working on a family-oriented 125cc scooter. Now, Aprilia has good presence in the performance scooter segment, but have nothing so far to cater to the masses. This upcoming scooter will certainly help the Italian brand rake in the numbers, and it’s reported that this product will be launched by mid-2019. It is said to pack practical features like large underseat storage, floorboard space, comfortable seat and the likes. The scooter reportedly features a differently-tuned version of the SR 125’s engine. Expect the design language to be toned down compared to the SR 150. The upcoming scooter might carry a price tag of around Rs 60,000 (ex-showroom) and it would compete against the Suzuki Access 125 and Honda Activa 125. 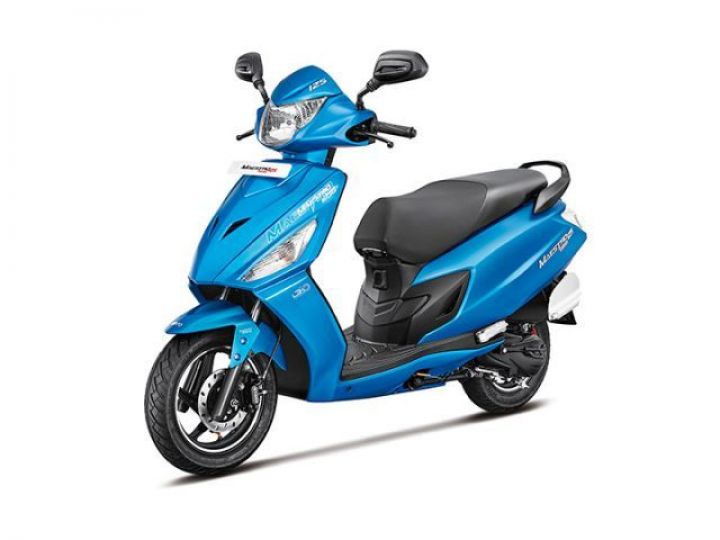 Hero entered the 125cc segment with the Destini 125 in late 2018. While the Destini 125 has a more of a family-oriented appeal, the Maestro Edge 125’s design is sportier, and will appeal to younger audiences too. It was showcased at the 2018 Auto Expo, and the scooter is expected to be launched in early 2019. Its design is quite similar to its 110cc cousin with subtle differentiating elements like front disc brake, blacked-out grab rail, and black alloy wheels with chrome highlights. The engine will be the same 124.6cc single-cylinder unit with i3S tech that does duty in the Destini 125 generating 8.83PS and 10.2Nm. There is a possibility that Hero might equip the motor with fuel-injection. The upcoming scooter will rival the Suzuki Burgman Street and the Honda Grazia. Expect Hero to price it at around Rs 60,000 (ex-showroom). 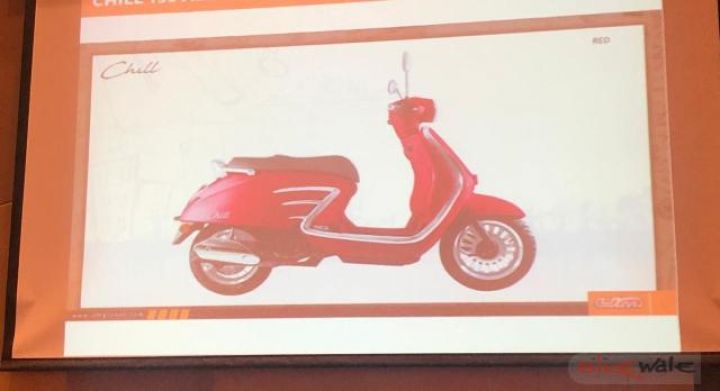 UM seems to have set its sights on the premium retro scooter segment with a new offering that is set to be launched in the middle of this year. Pictures of the scooter have surfaced online, in what appears to be a dealer conference. It features a very retro design that’s reminiscent of the Vespas, particularly the Primavera. You get a hexagonal headlamp with chrome shrouds, tastefully done analogue instrument cluster, and a curvy bodywork with fat chrome strips on the sides. The alloy wheels also appears to have chrome finish, and come with disc brakes on both ends, with ABS (single-channel likely). Expect the 150cc motor to produce similar power figures compared its rivals, the Vespa SXL/ VXL 150 (11.6PS & 10.6Nm). The upcoming scooter is likely to cost around Rs 80,000 (ex-showroom). 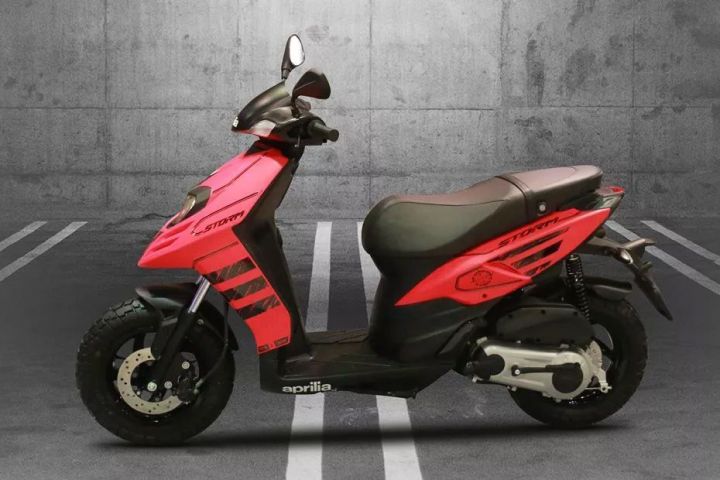 Aprilia showcased the Storm 125 at the 2018 Auto Expo. It is essentially a more rugged version of the SR 125, complete with off-road oriented tyres shod on smaller 12-inch alloy wheels on both ends. The front tyre measures 120/80 while the rear is a 130/80 unit. Apart from these features, the scooter’s bodywork is more or less the same as the SR 125. The engine too is the SR 125’s 124.49cc single-cylinder air-cooled motor which produces 9.6PS and 9.8Nm. When it comes to pricing, expect the Storm to undercut the SR 125 marginally, as it makes do with smaller wheels. The SR 125 retails at Rs 65,878 (ex-Mumbai) for the non-CBS variant. 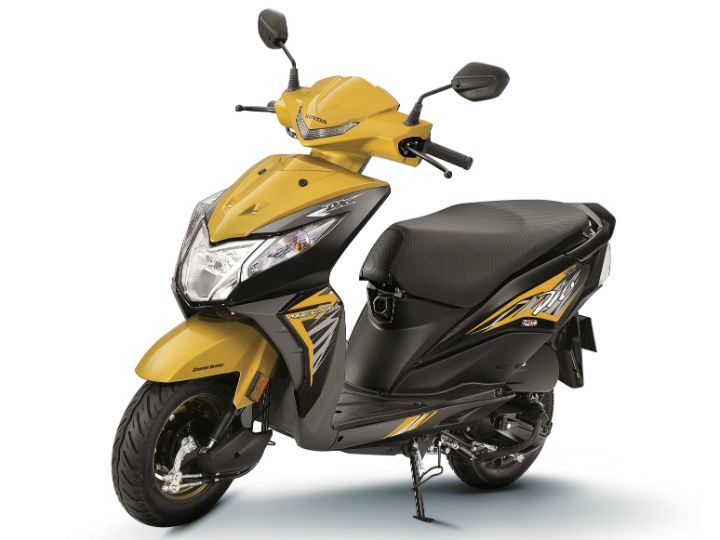 The Honda Dio has always been the sportier looking cousin of the Activa right from the first-gen model. Now that Honda already has the Activa 125, it does make sense for the brand to consider bringing in a 125cc version of the Dio. The sporty 125cc scooter segment seems to be commanding healthy sales numbers, thanks to competent products like the TVS NTorq 125. The sporty design language of the Dio, coupled with its sprightly dynamics could make it a worthy competitor to the NTorq. It would also be an even more aggressive-looking alternative to the Grazia. 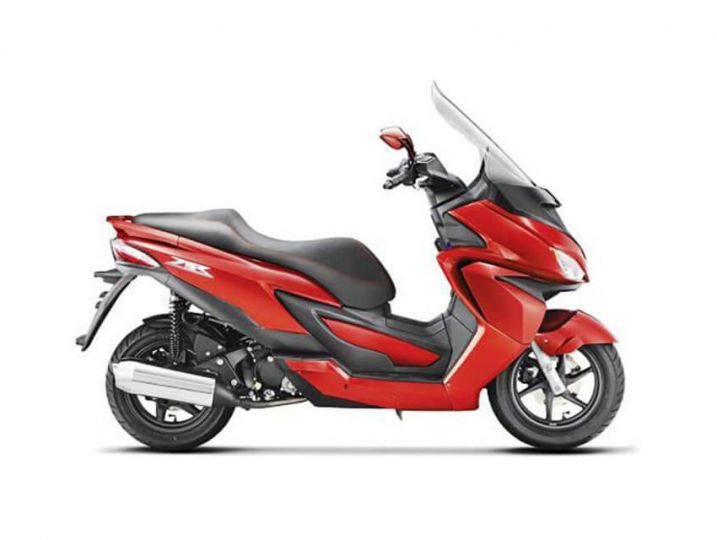 Hero MotoCorp showcased the Zir concept back at the 2014 Auto Expo. The scooter was quite ahead of its time, thanks to the very Euro-looking maxi-scooter styling, projector headlamps, LED tail light and indicators, petal disc brake on both ends, with Integrated Braking System to name a few. It even featured Hero RideStat smartphone app compatibility which shows the trip details on your smartphone. Its instrument cluster was a neat analogue-digital combo unit. The ergonomics were quite comfortable because of the nicely-sculpted European style seat and a large windscreen.

It was powered by a 157.1 cc liquid-cooled single-cylinder engine good for 14.1PS at 8,500 rpm and peak torque of 12.7 Nm at 7,000 rpm. Given the market response to the Suzuki Burgman Street despite its premium pricing, there’s a small, yet growing market for premium scooters in India. If Hero launches this maxi-scooter this year, it would lock horns with the the upcoming Yamaha NMax 155. 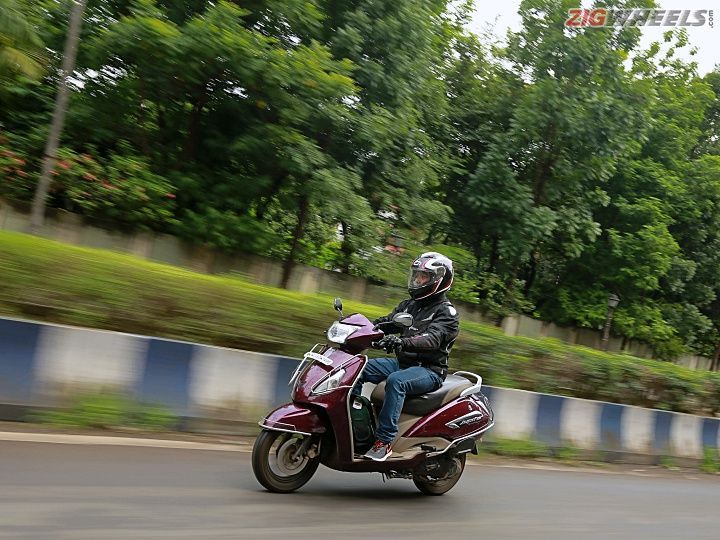 The Jupiter has been raking in consistent numbers for TVS and is, in fact, its highest selling two-wheeler currently. Additionally, the Jupiter has been the only real competitor to the famed Honda Activa (though the sales gap is considerable). The Jupiter is quite capable and strikes a good balance between comfortable dynamics and practical features. We can’t help but think about the possibility of TVS offering a 125cc version of the Jupiter as it would be an ideal alternative to other scooters in the segment like the Suzuki Access 125 and Honda Activa 125. Moreover, it already has the NTorq 125 in the sporty 125cc segment, so the 125cc Jupiter will simply make TVS’ portfolio more wholesome. 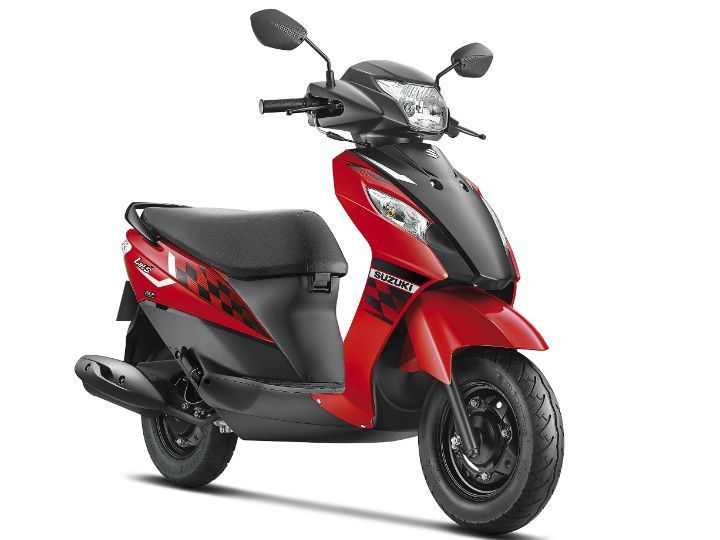 Suzuki does have a 110cc scooter in its portfolio called the Let’s. However, the scooter isn’t exactly setting the sales charts on fire, despite having a good engine and capable underpinnings. We wish Suzuki launches a family-oriented scooter with the same engine, but new design language and a palatable name. Including features like metal bodywork, external fuel filler cap, generous seat and underseat storage, USB charging port and alloy wheels could help Suzuki go a long way in making the scooter more alluring for matured buyers. They already have a sizeable dominance in the 125cc space with the Access 125 and the Burgman Street, while this 110cc scooter will help Suzuki achieve even greater sales numbers, and should give the Honda Activa 5G and the TVS Jupiter a healthy competition.

New-Gen BMW 3 Series Spotted In India; 2019 Launch On The Cards