A Day At A Theme Park Temple 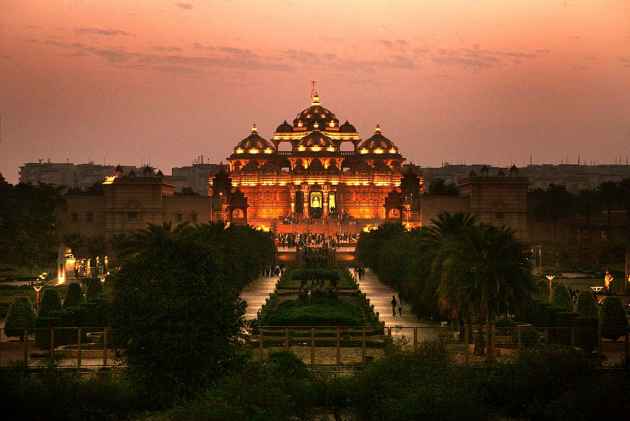 The Akshardham Temple… complex, spread over an area of around 100 acres [on the banks of the Yamuna river in Delhi] was constructed by the Bochasanwasi Shri Akshar Purushottam Swaminarayan Sanstha (BAPS), one of the major sub-sects within the Swaminarayan movement. The Swaminarayan movement is located within the Bhakti tradition, and its founder, Bhagwan Swaminarayan, was born into a Brahmin family 1781 in a small village near Ayodhya…. BAPS came into being in 1906…

All Swaminarayan sub-groups have a global following, with largest numbers being Gujaratis, and there are temples belonging to the different groups in various cities in North America, the UK, and Europe…. Dwyer (2004) points out that the movement has become 'the dominant form of British Hinduism' (2004:180) as well as 'the dominant form of transnational Gujarati Hinduism' (Dwyer 2004:181). Williams (1984) estimated the global following of the movement to be around five million, though this figure is now likely to be much higher with BAPS itself estimated to have a following of over a million (Dwyer 2004).

The BAPS back bone is an order of all-male 'Swamis', currently numbering around seven hundred, who carry out a variety of religious, 'social'  and administrative tasks in various parts of India and globally. All Swamis are celibate and once they have broken ties with their families, they are forbidden to make direct contact again. BAPS regulations on recruitment into the order of Swamis require that applicants be over twenty-one as well as having a university qualification…
By 2000, BAPS had acquired around 30 acres of the land at the present site, with the holding eventually increasing to 100 acres. There had been considerable controversy over the manner in which land had been allotted BAPS, and, during 2003 and 2004, newspapers reports suggested that the ruling National Democratic Alliance (NDA) — of which the BJP was the dominant partner — had smoothed the way for the [organization] to take over the land. Construction of the complex began in November 2000 and a Chief Architect (CA) was appointed for the project. The CA, Mr. Virendra Trivedi, had 'already designed a number of beautiful temples in India and other countries including U.S.A. and U.K.'

From Delhi, the most direct approach to the temple is via the Hazrat Nizammuddin Bridge that spans the Yamuna. As one crosses over (eastwards) towards the localities of Mayur Vihar and then into Uttar Pradesh, in the distance, to the right of the Nizammuddin Bridge, is the Delhi-Noida-Delhi (DND) tollway which provides high-speed access between South Delhi and NOIDA. Located in Uttar Pradesh, The New Okhla Industrial Development Area has become an important residential and commercial locality, gradually evolving into an outlying suburb of Delhi. The road that leads to the temple complex comes off the eastern end of the Nizamuddin bridge, across the river, on National Highway 24 that leads to Lucknow. The massive dome of the temple is visible from some distance, and the turn off to the complex is immediately before a new clover leaf flyover that is another route to NOIDA.  Not far from the complex is the site of the 2010 Commonwealth Games (CWG) 'village'. From the CWG village as well as the temple complex there is a clear view of the rubble-remains of the locality that housed [the slum cluster of] Nangla Matchi, [which]… was demolished in 2006 on the orders of the Delhi High Court.

Visitors arrive at the… [temple complex] by chartered bus, taxi, auto-rickshaws, or private vehicles.  Buses and cars are directed to a massive parking area, not unlike those that surround large shopping malls in the United States. At the entrance to the car park, temple volunteers check underneath all vehicles with security devices…. On most days, long queues form at the security gates, with the crowds kept in order by winding metal barriers that ensure. Checking of visitors is carried out three times, including bodily frisking, and inspection with metal detectors. Finally, the well-patted and frisked crowd emerges on to the temple complex. Entrance to the complex is through the 'Mayur Gate', decorated with 869 peacocks. Also on display are eight water screens.  Soon after the Peacock Gate entrance, visitors move into a large covered hall with marble flooring, dim lighting, plotted plants, and information counters. Behind the counters sit well-presented young women wearing 'corporate' saris. Along the walls are various displays regarding the complex and BAPS. The hall has the feel of a five-star hotel lobby.

Beyond the Mayur Gate and the lobby, the complex is divided into different sections, and some of these attract an entry fee. In particular, a combined ticket for the Hall of Values (also known as Sahajanand Darshan consisting of an 'audio animatrix show' (depicting various scenes from Swamimarayan's life), Neelkanth Darshan (an IMAX theatre), and Sanskruti Vihar (a boat ride through '10,000 years of Indian history') costs Rs. 170….

Ramesh Swami (RS) is in charge of four of the major attractions at Akshardham. He oversees the running of the high-tech Hall of Values, the IMAX cinema, the '10,000 years' boat ride, and the musical fountain. In his late twenties, RS was born in south London and decided to join the order at the age of 18. While still at school, he had visited a Cultural Festival of India organized by a BAPS chapter in the USA…. RS's office is a massive, air-conditioned room, and at our first meeting, he sits behind a desk at one end of the hall, occasionally receiving calls on his mobile phone and giving out instructions.

…For six busy days of the week, Ramesh Swami must ensure the smooth running of a host of technologically complex machinery and computer systems that form the backbone of Akshardham's key attractions. Most of the buildings [in the complex] are made of pink sandstone, with the temple itself a mixture of the sandstone and white marble. [RS tells me that] a group of Swamis visited Disneyland and Universal studios during the planning of the temple complex, and that many of the ideas in the exhibition hall are based on these two theme parks in the US. However, he added, 'our boat ride is 12 minutes long whereas the one at Universal Studios is only 5 minutes'.

[There are four different exhibitions within the Hall of Values]. The life-size mannequins in each diorama are animated through a combination of robotics, fibre optics, and light and sound. As the audience takes its place, the mannequins spring to life, acting out scenes from, what we are told, is 18th Century India….

There are sitting mannequins that — startlingly — stand up, life like scenes in the jungle, and village scenes depicting Swaminarayan in acts of helping the poor, giving religious discourse, teaching students, helping the sick, etc. We arrive at the village tableau — the last exhibition in the Hall of Values — by crossing mock-rickety bridge, past a serious of waterfalls and scenes depicting rainfall. The village exhibition is one where the audience gathers upon a semi-circular balcony and looks down upon an idealized — mud and cow dung — courtyard. Different acts from Swaminarayan's life are highlighted through the use of spot-lights that light up in turn, illuminating a variety of tableaus showing activities involving Swaminarayan, accompanied by commentary in English or Hindi.

Neelkanth Darshan, the IMAX show on an 85' x 65' screen, is next. The film charts the life of Bhagwan Swaminarayan from childhood to adulthood, focusing on key events. Both the adolescent and adult Neelkanth are portrayed by androgynous actors. The 'adult' Swaminarayan is slim, has high cheekbones and full lips…. Re-titled 'Mystic India', the film has also been screened in IMAX theatres around the world...

Following the Neelkanth Darshan IMAX show, we move on to Sanskruti Vihar, the boat ride which is advertised as a 'journey into 10,000 years of Indian civilization in 10 minutes'. These are long-boats — much like those in theme parks — that run along underwater tracks. The fore and aft sections are designed such that the vessels look like swans, an image that borrows from representations of 'ancient Hindu' culture in Indian cinema…We move from the 'ancient' period depicting, among other things, Indian 'achievements' in the fields of astronomy, medicine (including 'plastic surgery'), armaments manufacture and warfare, astrology, 'the functioning of democratic governance', debating, schooling, 'the world's first university', mathematics, cattle rearing, maritime trade, and 'inventions by the great rishi-scientists of India'.  There are also tableaus representing significant religious figures, and various other famous personalities from Indian history…The boat ride ends at a tableau where card-board cut outs of modern Indians look out from houses and various other urban locations, and the commentary asks that 'we' build upon the heritage of ancient civilization for a better future…

This theme park, with its appeal to Indian antiquity and 'ancientness' is [however] not…located within a context of nostalgia that separates its space from the outside [an aspect that holds for theme parks in general]. Akshardham's appeal is related to the fact that its tableau of consumption (of objects and spaces) is understood by its visitors and represented by its promoters as contiguous with the world outside. Its self-representation in terms of technological mastery, efficiency, punctuality, educational achievement and the processes of contemporary consumerism link it with the world of toll-ways, highways, shopping malls, city 'beautification' and slum-clearance drives, and the creation of spaces of middle-class identity…. The temple complex is in the midst of, rather than removed from, the processes of contemporary modernity; nostalgia has little appeal for an audience whose dominant memory of the immediate past might be of the license-permit regime of the Five-Year Plan state where material benefits were largely sequestered by an industrial-bureaucratic elite.