'A Conspiracy Hatched By The Children Of Marx And Macaulay' 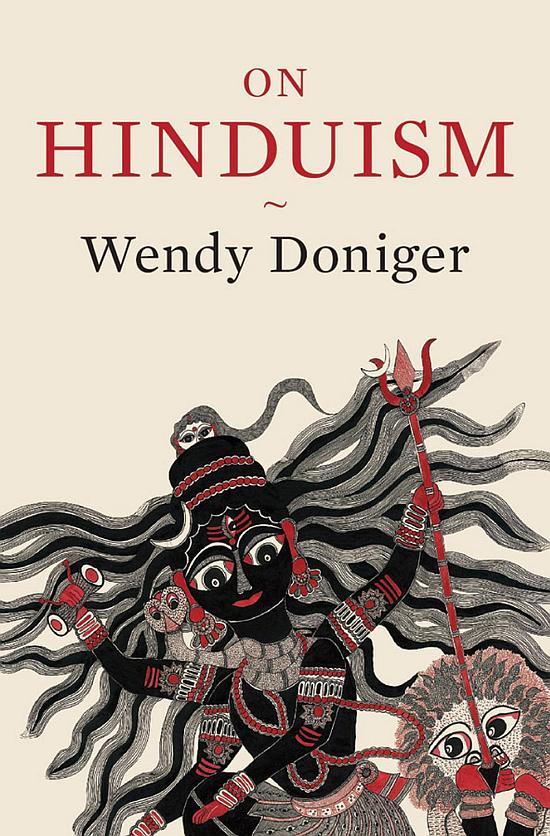 After successfully getting Penguin Books India to agree to pulp all copies of Wendy Doniger's The Hindus: An Alternative History,  Shiksha Bachao Andolan Samiti (SBAS) demanded on Saturday, March 1, 2014 that the Aleph Book Company stop sales and pulp all remaining copies of Doniger's book On Hinduism, published in 2013.

Addressing a press conference on March 1, Dina Nath Batra, who had led the campaign against Doniger's previous book, said that the contents of On Hinduism were "malicious and offending" like The Hindus: An Alternative History:

"It is part of a conspiracy hatched by the children of (Karl) Marx and (Thomas) Macaulay to tarnish the image of Hindu culture. There are certain pseudo secularists who are behind this conspiracy. She has used derogatory terms for Hindu deities, which hurts the sentiments of devotees...Article 295 (A) states that deliberate and malicious acts intended to outrage religious feelings of any class by insulting its religion or religious beliefs shall be punished with imprisonment or fine, or both."

These are the "Objectionable passages from Wendy Doniger's second book On Hinduism" according to Shiksha Bachao Andolan, some of which in particular—starting with the very first—are, of course, likely to leave one mystified as to what exactly is being objected to:

After the attacks on me on the Internet, particularly after the publication of The Hindus, vii I almost lost my old sense of trust in my readers, and for a while I actually thought I would stop writing about India altogether;

Page-18
Vivekananda set himself firmly against all forms of caste distinction and advised people to eat beef.12

Page- 510
Unbelievers and infidels, Dalits and women, were forbidden to learn Sanskrit, the sacred language, because they might defile or injure the magic power of the words;

Page-513
precisely in order to limit it to an elite, exclusive group, Sanskrit confined certain forms of the Indian classics (particularly sacred texts) to males of upper castes.

Page-515
‘But these Jains’ they continued, ‘ who are actually Shudras, since they have abandoned the true works of the Puranas, babble things about the Pandavas which are contrary to the smritis.’

SHADOWS OF THE RAMAYANA
Page- 525
Rama’s mother, and then Lakshmana, who says, ‘ I don’t like this. The king is perverse, old and debauched by pleasure. What would he not say under pressure, mad with passion as he is?

Page 526
You are so perverse, You think that if Rama dies you can have me, but I will never let you posses me, Bharata has gotten you to follow Rama as his spy. That’s what it must be. And you’ve stayed here is order to get me………….while pretending to be a friend. And that’s why you won’t come to his aid. But I will never have anything to do with any man but Rama.’

Page 532
Rama then pretends to grieve for sita, pretends to fight to get her back, and lies to his brother Lakshmana, who genuinely grieves for Sita.

Page 535
One day, when Ravana was full of passion, he saw the celestial courtesan Rambha and went mad with lust for her. She reminded him that she was his daughter-in-law, more precisely the wife of Nalakubara, the son of Ravana’s brother Vaishravana. But Ravana replied, ‘ You say you are my daughter-in-law. For those who have but one husband, this argument is valid, but in their world the gods have established a law said to be eternal, that celestial courtesans have no appointed consorts, nor are the god monogamous.’ Then he raped her.

WOMEN IN THE MAHABHARATA
Page 539
But Kunti had already had one son, secretely, out of wedlock: when she was still a young girl, she had decided to try out her mantra, just fooling around. The Sun god, Surya, took her seriously; despite her vigorous protests and entreaties, he raped her and afterwards restored her virginity.vii She gave birth to karna, whom she abandoned in shame; a charioteer and his wife adopted him and raised him as their own.{1.104; 3.290-294;5.144.1-9}

Page541
She objected, saying that it is against the law for a woman to have more than one husband, for then there would be promiscuity; moreover, her one husband should have her as a virgin. But Shiva reassured her that a woman is purified every month with her menses and therefore there would be no lapse from dharma in her case, since she had asked repeatedly for a husband. Then she asked him of she could be a virgin again for each act of sexual union, and he granted this, too. {1.189;1.1.157}

Page573
I had cited from Valmiki’s Ramayana in which Sita, the wife of Rama, accuse her brother-in-law Lakshmana of wanting her for himself. vi The web message stated:

I was struck by the sexual thrust of her paper on one of our most sacred epics. Who lusted/laid whom,it was not only Ravan who desired Sita some I had never heard of, from our other shastras were thrown in to weave a titillating sexual tapestry. What would these clever, ‘Learned’ western people be doing for a living if they did not have our shastras and traditions to nitpick and distort?5

My defence in the news coverage about the egg incident was :-

The Sanskrit texts {cited in my lecture} were written at a time of glorious sexual openness and insight, and I have often focused on precisely those parts of the texts……… The irony is that I have praised these texts and translated them in such a way that many people outside the Hindu tradition--- people who would otherwise go on thinking that Hinduism is nothing but a caste system that mistreats Untouchables-have come to learn about it and to admire the beauty, complexity and wisdom of the Hindu texts.”

Page 574
Last November, I was chairing a lecture on the great Hindu epic, the Ramayana, at the school of Oriental and African studies in London. The lecture had been sponsored by a wealthy Hindu philanthropist, and was given by the celebrated Sanskrit scholar, Professor Wendy Doniger…. Midway through the lecture, a man stood up, walked threateningly towards the podium and threw and egg at Doniger, which narrowly missed her. During the questions that followed the lecture, Doniger faced a barrage of heated insults from a group who had come with the egg-thrower, and who maintained that as a non-Hindu she was unqualified to comments on their religion. Other SOAS lectures in India have since been broken up in similar circumstances.

Page 580
A Hindu who didn’t like kama
Refused to take off his pajama,
When his bride’s lustful finger
Reached out for his linga
He jumped up and ran home to Mama.

Page -41
The Jains, Sikhs and Buddhists, however, deny the Vedas and are complete outcastes.

Page-51
“ So, friar(bhiksho), I see you have a taste for meat
Not that it’s any good without some wine.
You like wine too, then? Better when I dine
With pretty harlots, surely such girls eat
No end of money, ‘ Well, I steal, you see,
Or win at dance, ‘ A thief and gambler. Too?
Why, certainly, What else is there to do?
Aren’t you aware I’m vowed to poverty?

Page -57
HERESY CREATED BY THE GODS
Brahman and Vishnu were arguing, each shouting that he was supreme. In anger, Brahma cursed Vishnu: ‘ You will be deluded and your devotees will have the appearance of Brahmins, but they will be against the Vedas and the true path to release. They will be Tantric Brahmins, initiated into the Pancharatra, ever averse to the Vedas, law-books and the proper rituals that give release.

Page-58
Reviles himself just enough to make Himalaya lose his pure devotion and remain on earth.141
A similar episode occurs in the Mahabharata:
Formerly, all creatures were virtuous, and by themselves they obtained divinity. Therefore the gods became worried, and so Brahma created women in order to delude men. Now women, formerly virtuous, became wicked witches by the will of Brahma, who filled them with wanton desires that they in turn inspired in men. He created anger, and henceforth all creatures were born in the power of desire and anger. Here, as so often in Hindu mythology, women are the root of evil, though in this case, not through their own fault.

Page 68
Even Queen Vicotira Found a place in the Hindu pantheon; when a plague broke out in Bombay just after her statue had been insulted, certain pious Hindus believed that the disease was “ the revenge inflicted by her as insulted divinity

Page 119
Yogis also posed sexual threats, through an ancient Hindu belief in the crotic powers, of yogis, along a spectrum from genuine ascetics, who were said to be able to use their unspent sexual powers to bless infertile women and thus make them fertile, to false ascetics, who were said to use their status as yogis as mask through which to gain illicit access to women.

Page 121
Indians shamefacedly agreed; Indian children in Gandhi’s days used to chant a popular poem: ‘ Behold the mighty Englishman / He rules the Indian small, / Because being a meat-eater/ He is five cubits tall. The playing fields of Eton had made the English frightfully brave, as Noel Coward pointed out , but so had a regimen of exercise that they now imported into India.

Page-136
Classical Hindu India was violent in its politics(war being the raison d’etre of every king), in its religious practices(animal sacrifice, ascetic self-torture, fire-walking, swinging from hooks in the flesh of the back, and so forth), in its criminal law ( impaling on stakes and the amputation of limbs being prescribed punishment for relatively minor offences), in its hells(cunningly and sadistically contrived to make the punishment FIR the crime) and, perhaps at the very heart of it all, in its climate, with its unendurable heat and unpredictable monsoons.

Page- 137
Swami Vivekanand claimed, wrongly, that ‘India is the only country where there never has been a religious persecution.”

Page- 137
Shortly after Partition, a member of the fundamentalist and anti-Muslim Hindu associations, the RSS, remarked that, since Hindus are, as it well-known, the most tolerant people in the world, they deserve to have the land of India to themselves, and, therefore, the(less tolerant) Muslims should be disenfranchised.

Page-137
Here it is perhaps appropriate to recall that it was an RSS man who killed Gandhi. On the lighter side, the widening gap between the ‘tolerant’ scriptures and the intolerant interpretation of them was evinced in India Today in 1991:

Page- 138
hese same political and economic factors, inflamed and perhaps manipulated by the rhetoric of religious intolerance, resurfaced to demolish Babur’s mosque in Ayodhya in 1992, to inspire the killing of Sikhs in Delhi in 1984 and of Muslims in Gujarat in 2002, and to exacerbate the extreme suspicion and hatred.

Page- 139
Yet here, too, we must curb our optimism by noting that bhakti did not overthrow the caste system and that it was in the name of bhakti to Rama that the militant Hindus tore down Babur’s mosque.

Page 144
The accurate historical account would illustrate the Sangh’s complacency with British rule in the years leading up to Partition.

Page-146
Placing the Ramayana in its historical contexts demonstrates that it is an epic poem created by human authors who lived various times.