Taking Over Afghanistan By Force Won’t Grant You International Recognition: Blinken To Taliban

‘Even as we withdraw our forces from Afghanistan, we remain engaged there,’ US Secretary of State Antony Blinken said 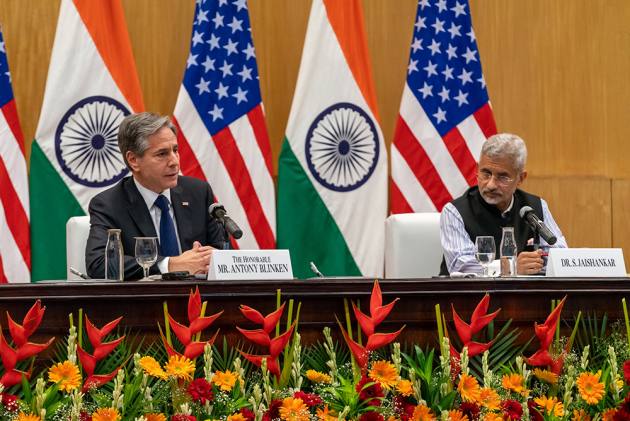 US Secretary of State Antony Blinken made it clear during his short visit to India that the US is not washing its hands off Afghanistan, though boots on the ground will not be there after August 31. “Even as we withdraw our forces from Afghanistan, we remain engaged in Afghanistan. We have not only a strong embassy there but also have important programs that support the country economically through development and security assistance,’’ Blinken said at a news conference after his talks with External Affairs Minister Subramanyam Jaishankar in Hyderabad house on Wednesday.

It is well known that the US will continue financial assistance to Kabul and that will be a great help. After the Soviet troops withdrew from Afghanistan in 1989, the Najibullah government survived till 1992, but collapsed as soon as Russia stopped the flow of funds. Once that stopped, Najibullah’s government fell like a house of cards. During Afghan President Ashraf Ghani and chief peace negotiator Abdullah-Abdullah’s visit to Washington last month, President Joe Biden promised financial assistance, but little more.

The deteriorating situation in Afghanistan, where peace talks are yet to make any dent to the Taliban’s campaign of grabbing as much land as possible is continuing without a break was discussed threadbare at the meeting. Despite repeated calls by the international community as well as the Ghani government for a ceasefire, the Taliban is in no mood to listen. It believes military gains will strengthen its negotiating position when and if the talks take place. In the meantime, Afghan civilians are bearing the brunt of the fighting with people moving out from areas where the fighting is intense. Internal displacements are reported across the countryside.

At the news conference, Blinken warned that the world was in no mood to accept a Taliban government which seizes power militarily in Kabul. “The Taliban says that it seeks international recognition, that it wants its leaders to travel freely in the world and sanctions against some of its people lifted,’’ Blinken said at the news conference. “Taking over the country by force and abusing rights of the people is not the path to achieve those objectives. There is only one path and that is at the negotiating table to resolve the conflict peacefully,’’ the visiting Secretary of State added.

Without a negotiated settlement there will be no recognition of the Taliban’s authority. Both India and US agreed that Afghanistan would be a pariah state in case of a military take-over. That has been drummed in by every member of the international community, including China, Russia, Iran and Pakistan. A Taliban delegation is in China today and met with foreign minister Wang Yi. The minister said he hoped Taliban to play an important role in the peaceful reconciliation and reconstruction of Afghanistan.

New Delhi and Kabul believe that Pakistan continues to help the Taliban and this is more of double-speak. Jaishankar emphasized that any “future government has to be be inclusive and fully representative.’’ Women and minorities have to get their rights under any future government.

Soon after talks with Jaishankar, Blinken tweeted : “Thanks to @DRSJaishankar for a collaborative discussion today on many areas of cooperation, including efforts to support peace and stability in Afghanistan. India is one of our most valued partners, and the U.S.welcomes India’s emergence as a leading global power.’’

Thanks to @DrSJaishankar for a collaborative discussion today on many areas of cooperation, including efforts to support peace and stability in Afghanistan. India is one of our most valued partners, and the U.S. welcomes India's emergence as a leading global power.

Besides Afghanistan, Jaishankar and Blinken also discussed bilateral ties and China as well as the Quad and Covid-19 cooperation. The visitor thanked India for the help extended to the US during the first wave of the pandemic. Blinken announced an assistance of USD 25 million to help India’s vaccination efforts. The US had already contributed more than USD 200 million for India’s fight against Covid. He said India and the US will work together to end the pandemic. Jaishankar said that the pandemic was discussed at length and announced that, "We focussed today on expanding vaccine production to make it globally available and affordable." The Indian minister thanked the US for keeping the raw material supply chain open for vaccine production in India. He said New Delhi was grateful for the truly exceptional support it received from Washington. “We also discussed travel challenges resulting from COVID. The US has been really forthcoming on students, I really appreciate that. And I very much hope that they will take a sympathetic view in regards to other travellers in the days to come," the Indian minister said.

Despite some differences between India and the US on some issues, the relations between the world’s oldest and largest democracies are on an excellent wicket as their strategic interests especially on China converge. Blinken also held an hour-long meeting with India’s NSA Ajit Doval and called on Prime Minister Narendra Modi.