'Turkey Was A Good Race'

'I had so little time to learn the circuit again. Possibly about 20 laps more or less. This was really a big disadvantage. But I decided to keep pushing. 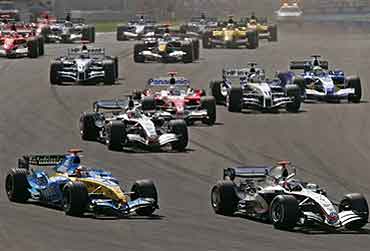 Narain Karthikeyan overcame the disappointment of not setting a grid position in qualifying and finished 14th in the retirement-marred inaugural Turkish Grand Prix at the newly-laid Istanbul Park today.

Christijan Albers of Minardi, Michael Schumacher of Ferrari, Nick Heidfeld of Williams, Felipe Massa of Sauber and Mark Webber of Williams were the casualities as they failed to finish the race under hot conditions.

Karthikeyan ended his race three laps behind the winner, but managed to record his 10th finish in 14 races of the season so far.

"Definitely Turkey was a good race for me. By mid-race, I was running in 13th position again as my team-mate was refuelling. By then, five drivers had dropped out of the race: Filipe Massa, Christijan Albers and the two BMW Williams on top of the world champion in his Ferrari," Karthikeyan said.

"I maintained my car in 14th position as Schumacher came back on the track on lap 34 after 26 minutes in the box for repairing the damage to his car," he said.

That he could not complete his qualifying was a disadvantage for Karthikeyan as he could not learn the circuit yesterday. "I had so little time to learn the circuit again. Possibly about 20 laps more or less. This was really a big disadvantage. But I decided to keep pushing. I just wanted to finish the race. Towards the end, I had to be a bit conservative with my tyres which explains why I could not catch Doornbos," he said.

The 28-year-old said Team Jordan would once against test their new car ahead of the next race in Monza.

"We are testing next week in Monza prior to the next Grand Prix on September 4. We will be testing the new car. From there on the team will decide if we will use the EJ15 B."

His team-mate Monteiro most probably suffered a brake problem and three laps before the end of the race had a contact with Montoya. He almost lost the car on the track at turn 1, but luckily continued.