If the POTA is wrong, how can the AFSPA be right? If the AFSPA is right, how can the POTA be wrong? An imaginative and soothing approach to the grievances of the people of Manipur cannot be delayed anylonger. 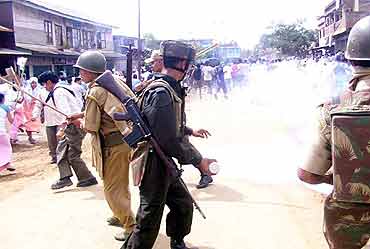 The law and order situation in Manipur has been going from bad to worse. The state seems to be moving slowly, but inexorably towards an implosion.

In an article titled The Creeping Cancer on the deleterious effect of uncontrolled narcotics smuggling on a society, written on June 7, 2004, I had stated as follows:

"Visit Manipur in India on the Myanmar border, which has been a favourite destination of heroin smugglers from the Golden Triangle. The increasing availability of heroin has weakened the administration, governance, the maintenance of law and order, public morality, public health and productivity and retarded economic development. There has been a mushrooming of insurgent groups, many of them not even having any political or economic or other objective. They have taken to insurgency because it pays and it pays because of the support they give to heroin smugglers. Insurgencies thrive because of the support of heroin-smugglers. Heroin- smugglers thrive because of the support from insurgents. That is what we call narco-insurgency. Manipur is a disturbing example of a failed state."

Even without the presence of narcotics smuggling, the law and order situation has always been a source of major concern to successive governments in New Delhi due to widespread feelings of alienation against the governments at Imphal as well as at New Delhi. A clueless political class, an uncaring bureaucracy, a lack of comprehension of the local people by successive governments at the Centre, total insensitivity to the feelings and concerns of the local people and a lack of seriousness in dealing with the problems of the people. Those are the ground realities in the state.

The utter lack of comprehension and the total insensitivity to the feelings of the local people were dramatically illustrated by the shockingly inept and casual manner in which the previous government of India, headed by Mr. A.B Vajpayee, dealt with the demand from the National Socialist Council of Nagaland (NSCN) led by Isaac Swu and Muivah, for a greater Nagaland incorporating in the present Nagaland the Naga-inhabited areas of Manipur, thereby giving cause for fears in the minds of the people of the state that it was inclined to succumb to the pressure of the NSCN on this issue.

The violent upheaval it caused in the state came as a big surprise to the Bharatiya Janata Party (BJP) government. Important pronouncements on such a sensitive issue had been made by the Centre without even bothering to consult the local administration. The total ignorance of the sensitivities of the local people on this and other issues exhibited by the BJP-led government did not speak well of its capability for internal security management.

However, it was not an exception. All political parties, when in power at New Delhi, hardly paid any attention to the Northeast in general and Manipur in particular. After Jawaharlal Nehru, Indira Gandhi and Rajiv Gandhi, no other Prime Minister of India had shown adequate interest in understanding and redressing the grievances of the people of the Northeast.

At least Nagaland, Mizoram and Assam received some attention because of the contacts of the local insurgent groups with the intelligence agencies of Pakistan, Bangladesh and China and the consequent fears of external involvement to exploit the local grievances to add to the difficulties of the government of India.

Such fears of external state involvement in the internal affairs of Manipur have been minimal. The result: One takes notice of Manipur only when there is a violent upheaval there. Manipur does not prick the national conscience in the same way as the other states of India in the North and the South do. This is as much true of the governmental machinery as it is of the civil society in the rest of India. This is as much true of the political class as it is of the media.

For the media too, Manipur is hardly newsworthy and not worth the expenditure of covering it. When there is an upheaval in Gujarat or elsewhere in India, the entire press corps rushes there. When Bilkis was allegedly raped by Hindus in Gujarat, the media vied with one another in covering it.. There was one investigative report after another. When the women of Manipur alleged the rape and killing of Manorama Devi by some personnel of the Assam Rifles, did it evoke the same interest in the media? Hardly.

If a Hindu rapes a Muslim or vice versa, that is news. But if a Hindu rapes a Hindu or a Muslim rapes a Muslim that is hardly news The allegations of rape and custodial killing of Manorama Devi may not be true and may be politically motivated, but it is the moral responsibility of the government to convince the people that it has treated their allegation seriously and taken the necessary follow-up action to find out the truth and, if true, take punitive action against those responsible.

The fact that the people's anger has not subsided on this issue shows that the government has failed to carry conviction with the people. The present government finds itself trapped by the contradictions of its own ill-thought-out and ill-advised pronouncements before and after the elections on the question of special powers for the police and other security forces to enable them deal effectively with terrorism and insurgency. Special powers are not something to be ashamed of. Every country in the world, including the UK and the USA, have given such powers to their security forces. These have been enhanced after 9/11. They have not become any the less democratic than we are by giving such special powers to their security forces.

Why should we think that we would become anti-democratic if we gave similar special powers to the Police in the form of the Prevention of Terrorism Act (POTA) or to the para-military and armed forces in the form of the Armed Forces ( Special Powers) Act (AFSPA) in the Northeast?

If the POTA is wrong, how can the AFSPA be right? If the AFSPA is right, how can the POTA be wrong? If it is wrong to use special legal powers against the lawless elements in the rest of India, how can it be right to use them against the people in the Northeast? If it is right to use special legal powers against insurgent elements in the Northeast, how can it be wrong to use them against the terrorists in the rest of India?

By its unwise and ill-considered pronouncements and promised policies on the question of special powers, the present government finds itself caught in a web of contradictions and runs the risk of causing in the minds of the people of the Northeast perceptions of double standards towards them.

There have been many wake-up calls from Manipur during the last four years. They have had no effect on the policy-makers in New Delhi. There has been no attempt to deal with the problems of the people and the state--political, economic, social and criminal justice--in a comprehensive manner. Many recommendations on this subject have come out in the form of voluminous reports from the Special Task Forces on Internal Security and Border Management appointed in 2000 and, one understands, from the report of the fourth National Security Advisory Board (NSAB) on improving governance in December 2003.

Those reports are crying out to be read, understood and implemented. The longer we delay an imaginative and soothing approach to the grievances of the people of Manipur, the greater the dangers of an implosion.

'This Government Would Not Fall'