The Congress spokesman got it perfectly right when he invoked the "high traditions of sacrifice exemplified by the party" in the much belated resignation offered by Jagdish Tytler. Updates 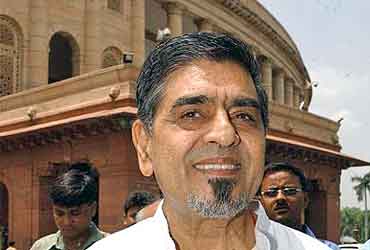 It is the same song, same verse. The blatant, shameless hypocrisy of Congress party and its pathetic attempts at first to try to brazen out the most outrageous of its misdeeds and then finally the Prime Minister -- under fire from all sections of the public, including from a miniscule section of his own party workers, allies, and the opposition -- shamed and forced into stepping in to try and do damage control by offering to do the very bare minimum that ought to have been done in the first place; the offenders to reluctantly and gracelessly resile from their original position; and the rest of the party to then assume what it presumes is its divinely ordained right: the higher moral ground.

One does not expect the Congress party to suddenly undergo an epiphany and become a paragon of virtue, but the very same sorry sequence of events leaves one gasping in disbelief. We saw the same theatre of the absurd in l'affaire Shibu Soren, then in Jharkhand, and now with the way this much-belated and much too blemished report of the Nanavati Commission of Inquiry has been handled.

And it isn't as if the party was suddenly caught on the wrong foot. The party's appalling record in the way it has sought to deal with the carnage of 1984 has been far too well documented to merit any repetition. And even this latest report, which is by no means as direct and unambiguous as the very first one conducted soon after the carnage, before the evidence could be "managed", had been with the government for more than six months.

Despite all its flaws and its inability to pinpoint responsibility for the barbaric carnage, it was shocking, to say the least, to note that all the stalwarts of the party thought that they would be able to get away with their feeble excuse of an Action (Not) Taken Report on what little the report did recommend. Is this the best they could come up with in six months?

That Jagdish Tytler and Sajjan Kumar were given tickets to contest was bad enough, that they won was more a commentary on the state of affairs of the opposition, and that Jagdish Tytler was made a minister to cap it all, despite murmurs of discontent, was already indicative of the Congress party's well-known tendency to not let any local leader become too powerful -- in this, to keep a check on the popularity of the Delhi Chief Minister. But after this report was submitted, to allow him to continue, for the home minister to take recourse to technicalities such as the legalese of the report, and to hope that it would all dissipate with time shows once again how very badly the party needs a reality check. (Perhaps the home minister, aptly described as the master of immaculate misconception, needs to be reminded that prosecutions and investigations are always initiated on probabilities?)

The only saving grace in this whole sorry and sad episode is that the reality check is administered by the public at large, cutting across party lines, and, in this, apart from the opposition, the role of the allies, notably the Left and the DMK needs to be emphasised. Which is what shamed and forced the prime minister to at least have the grace to finally say what needed to be said, at the very outset:

"Our government assures the House that wherever the Commission has named any specific individuals as needing further examination or specific cases needing re-opening and re-examination, the government will take all possible steps to do so within the ambit of law ...

Twenty years after the events, it may be considered late in the day to be saying this.However, if there has been any shortcoming in this regard, it is our solemn assurance that we will make sincere efforts to redress these shortcomings".

Noble words, these. And herein lies the rub. Why does it take the PM so long to step in with such a tame statement? Let's forget the last 20 years, and look back only at the last 6 months that this report had been with the government. Perhaps it is futile to expect any real introspection and expiation from the Congress party, or any standards of morality or probity from this Congress-led government, but what is more appalling is that apart from being in denial, the party has not even learnt any tactical lessons. It is scary when one realises that such are the geniuses who are also responsible for internal and national security, not to mention other pressing problems facing the country.

Let's leave the individual demerits of Jagdish Tytler's case or his various protestations and what he had to say aside for a moment, as such dissemblance, to put it politely, is perhaps only to be expected from him, but wouldn't the Congress party, its president of the famous inner voice which has deafeningly remained silent ever since, and the Prime Minister have carried far more conviction and credibility if what the PM was finally forced to say in Lok Sabha today were included in the alleged ATR to start with? Couldn't Jagdish Tytler have been made to resign, purely on grounds of what the PM called "perception and sentiments" at the very outset? Not that it, or any other token gesture, would ever be justice for the party's culpability in the barbaric massacre of Sikhs in 1984, but at least its intent to make a semblance of a sincere effort to atone for its sins could have carried some credibility.

But the party, it seems, is perhaps never too satisfied with itself. It does have to add insult to injury by deciding to add without much ado that "the resignation of union minister Jagdish Tytler following his indictment by Nanawati Commission report on 1984 anti-Sikh violence was in keeping with the high traditions of sacrifice exemplified by the party".

Yes, we have known the Congress "high traditions" for decades now. Thank you very much, Mr Abhishek Singhvi for reminding us of this "Congress high tradition of sacrifice". Sacrifice of truth, decency, probity in public life and even common sense, to randomly name only a few from what would obviously be a long list, have long been exemplified by the party. Could we now please request a departure from these high traditions and ask for at least a semblance of implementation of what the PM promised -- too little and too late though it is -- in Lok Sabha today?

Meanwhile, perhaps the Prime Minister, his party President and other sundry Congress workers could refresh their memory by reading Who Are The Guilty? as well as the other non-sarkari reports that we would be putting up on the website before they get too smug about the "clean chit" from Nanavati and subject us to nauseatingly self-righteous sermons on the traditions of their party.