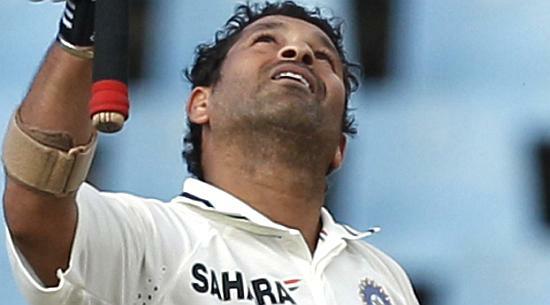 I saw his first Test century, at Old Trafford in 1990, and was enchanted by the prodigal performance of one so young. But if someone had whispered to me that 20 years later Sachin Tendulkar would be posting a 50th Test hundred I would have laughed. How could it ever be? There simply wouldn't be enough Test matches staged before his hair turned grey and his tummy began to swell, would there? What, was he going to play for India until he was fifty-five or something?

We now know the answers to all that. It remains one of the most awesome facts to grasp. Fifty Test centuries? I say it again to myself, quietly: 50 Test centuries? Ah well, we've seen some absolutely astounding performances in Test cricket during our lifetimes - in my case I actually listened to radio commentary on Jim Laker's 19 wickets in the Old Trafford Test of 1956, that same Old Trafford where the teenaged Tendulkar began his magical pile of hundreds. He was a class act then, and he is a class and fully mature act now.

Moreover, he has never been guilty of anything harming the game of cricket. That's as important as his batting genius. Lucky is the man who has seen all his half-century of centuries. I've witnessed quite a few via television and some live, including his awesome 241 not out at Sydney in January 2004. There came a slight dip in his fortunes and everyone (probably bar the man himself) thought that it was almost over. Then came the renascence, and eventually the marvel of his 50 Test hundreds.

For many reasons I wish that Sir Donald Bradman, the greatest runmaker of all, were still alive. I enjoyed a close friendship with him and have well over a hundred letters from him. In one, written in 1998, he wrote: "Magnificent batting by Tendulkar. I felt myself in tune with his technique and his aggression. So many batsmen wait on the defensive for a bad ball. My philosophy was to try and score off every ball and to take the initiative and I feel Tendulkar does this."

I heard that a photograph of them together made $22,000 at a black-tie dinner in Adelaide in 1998, when Don was heard to say that he thought the Indian star was "a lovely and impressive character". So say the rest of us.