Russia's Syrian intervention is a game-changer intended to persuade Washington to abandon regime-change and focus on the common struggle against regional extremism. 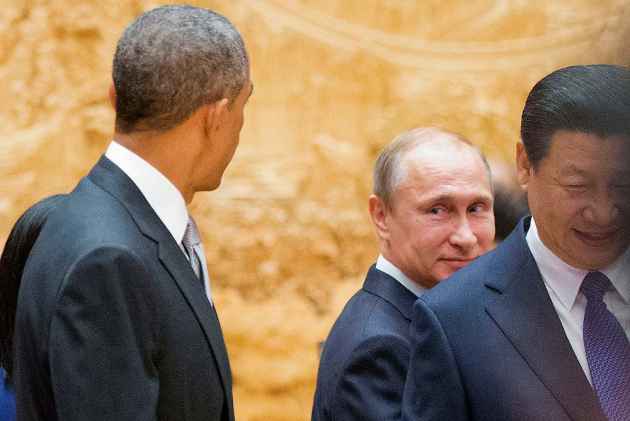 Moscow's carefully planned military intervention in Syria has shocked Western policymakers. The impressions over the past year seemed to suggest a Russia that was preoccupied in securing its own periphery in the Ukrainian conflict. Domestic economic problems induced by targeted sanctions seemed to have further constrained Moscow's hands as the Putin administration turned inward to address the crisis. While the Kremlin was licking its wounds, the Obama administration was moving cautiously but resolutely in striking a nuclear deal with Tehran that could re-orient Iran into assuming a less antagonistic role vis-à-vis the West. The geopolitical logic was brilliant. An Iran that re-defined its interests to focus on domestic growth and integration with the global economy might also be a more agreeable force in the region.

The US timing to push for the July Iran nuclear agreement at Vienna was also interesting. After all, it was Iranian along with Hezbollah fighters that were serving as a force multiplier to Damascus during the last few years. A post-nuclear deal US-Iran rapprochement that loosened the bonds between Tehran and Damascus or distracted a crucial patron to Syria while Assad's forces were entering a phase of serious vulnerability from the insurgency would have been a huge strategic gain for Washington. Indeed, while US intelligence assessments affirmed that Damascus had successfully resisted and even recovered territory from the rebels in 2014, this resurgence was cut short as Saudi Arabia, Qatar and Turkey raised the intensity of their proxy war in the spring of 2015. A July 2015 agreement between US and Turkey to coordinate anti-ISIS air operations and develop a "safe zone" on Syria's northern border along Turkey suggested a robust emerging bridgehead for the anti-Assad insurgency.

It was during this rapidly changing context that Moscow probably undertook a serious reassessment of its strategic interests in Syria. The ultimate choices were stark — abandon Syria or assume a more assertive ground-level posture in shaping the crisis. Watching the Syrian regime disintegrate in slow motion while Iranian foreign and security policies were undergoing their own changes would have ejected Russia from West Asia altogether. Putin's final decision was perhaps the only means to preserve Russian influence in the region, maritime access to the Mediterranean, and, influence internal Iranian debates by reducing incentives for a softening in Tehran's commitment to Syria as part of a trade-off with the West.

US Secretary of State John Kerry told reporters that Moscow's intervention was driven by "force protection", that is maintaining the security of Russian military personnel and assets in Syria. This, however, reveals little about the local dynamics and possible factors that are shaping Russia's calculus and future moves. As Putin has already stated, Russia's "main goal is to defend the Syrian state." The military assets that have so far been deployed signal a limited but a longer-term commitment to safeguarding strategic parts of Syria from both a ground-level insurgency and from a potential air-intervention by Western militaries. Russia could be deploying 2,000 military personnel in Latakia, a northwestern Mediterranean port city inhabited by the core ethnic supporters of the Assad regime. The new airbase already hosts 28 aircraft including 12 Su-25 ground-attack aircraft, 12 Su-24 dual-role low-flying tactical bombers and reconnaissance aircraft, and 4 Su-30 multirole air superiority fighters. In addition, transport and attack helicopters, artillery, armored personnel carriers and advanced T-90 tanks have also been positioned in the area. The base is protected by antiaircraft systems and Russia has also deployed drones to survey the battlefield and gain useful targeting information against the anti-Assad rebels. The nature of all this equipment suggests a foundation is being laid for a potential combat role for Russian forces.

What explains Russian deployments expanding to securing northwestern Syria rather than merely strengthening the traditional naval base of Tartus in the south? In an interesting analysis, Fabrice Balanche (University of Lyon 2) shows how the demographic structure of Latakia's half a million population is divided between the Alawites, Christians and the Sunnis, the former two comprising the heartland support for the present Syrian ruling elite. As the insurgency has grown not only has this tenuous balance been pro and anti-regime ethnic groups been disturbed, Sunni extremists have been gaining strength in the countryside posing a future threat to the coastal areas and an existential threat to non-Sunni groups across Syria's northwest.

In contrast, Tartus "is a true Alawite city, with Alawites constituting 80 percent of the population," and, the area away from the Tartus base is also "predominantly Alawite, with a strong Christian minority." Homs, a provincial centre 90 km east of Tartus and located on an important north-south highway, and Damascus, the Syrian capital further south, are also "being protected by Hezbollah and other Shiite militias" assisted and trained by Iran. The Assad regime is very secure in these areas. Clearly, the regime faces a greater challenge in northwestern Syria, where proximity to Turkey (who has served as the principal logistical conduit to funnel in the arms and trained manpower for the Syrian insurrection) has exposed a vulnerable front. Russia's assessment of its own geostrategic interests might also be a factor in its bolstering of Latakia. For one, Russia "plans to rebuild the former Soviet submarine base in Jableh, some twenty miles south of Latakia." Russia is also entrenching itself "along the southern Turkish border, with the ultimate goal of preventing Sunni Syrian forces from gaining access to the sea". In sum, the wider importance of reliable and permanent access to the Mediterranean world has become fused with a strategic commitment to Syrian state security.

For its part, the US has been engaged in its own anti-ISIS air operations since August 2014. As of 22 September 2015, the US-led coalition had conducted over 55,000 sorties and 7,000 air strikes in Iraq and Syria. But this anti-ISIS campaign has been accompanied by a parallel strategy to overthrow Damascus via a proxy war. In August, the former director of the US Defense Intelligence Agency, Michael Flynn remarked that the policy to arm Syrian rebels against the Assad regime, despite intelligence warnings that such assistance might strengthen extremist groups such as ISIS and Jabhat al Nusra, "was a willful decision" by the Obama administration. Plainly put, the Western approach in its entirety is trapped in a vicious and contradictory cycle where extremist groups are being propped up in the guise of "moderate rebels" for geopolitical reasons while the anti-ISIS air war is waged. Neither is it clear that the anti-ISIS operations have had decisive impact on the ground in Iraq. At end August it was reported that the Pentagon was investigating allegations that senior US Central Command officials had been doctoring intelligence assessments on the anti-ISIS campaign to exaggerate operational successes.

Will Obama and Putin de-escalate the crisis?

Russia's intervention in Syria is likely to have a transformative effect on West Asian geopolitics. An apparent division of labour between Russia and Iran when it comes to Syrian security suggests a new lease of life for Assad's regime and a potential blow to the insurgency. Russia has already once played its cards to dissuade a US air strike in the fall of 2013 by helping cut a deal on safeguarding Syria's chemical weapons. This time the circumstances were perceived as even more ominous from Moscow's perspective. Finally, if as some reports suggest China is planning to project limited naval power in the eastern Mediterranean in coordination with Russia and Iran, that will further challenge the Western narrative and geostrategy in the Middle East.

One outcome could see a changing balance of power in West Asia producing a tentative equilibrium and some sort of collective approach to resolving the Syrian crisis and managing regional security. Given the accumulated mistrust on all sides, however, we might see more escalation as the US and Russia jostle to influence the contest between Damascus and the externally supported extremists. Hopefully, Obama and Putin's first formal talks after two years scheduled at the UN on 28 September will open a new phase of restoring some order to an explosive West Asia.