Raheem Sterling's first-half goal gave Manchester City all three points in a tough battle with Southampton in the Premier League. 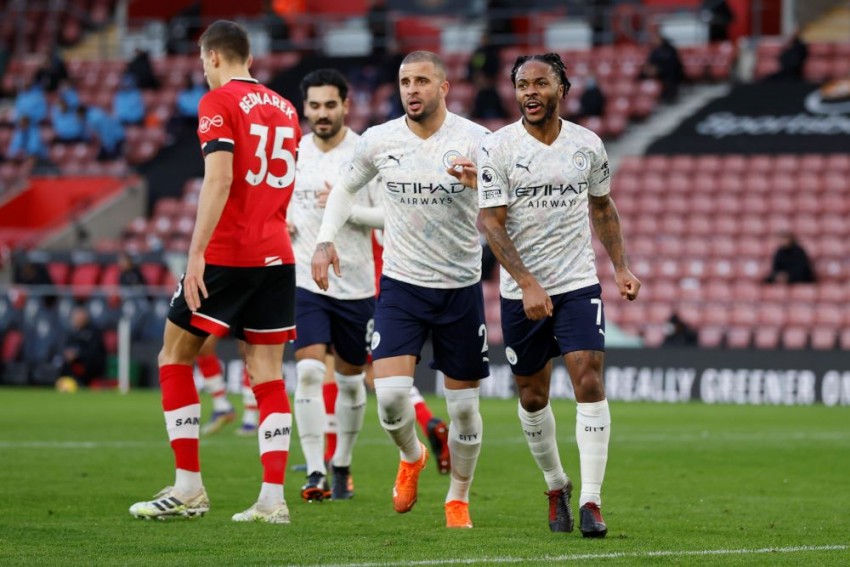 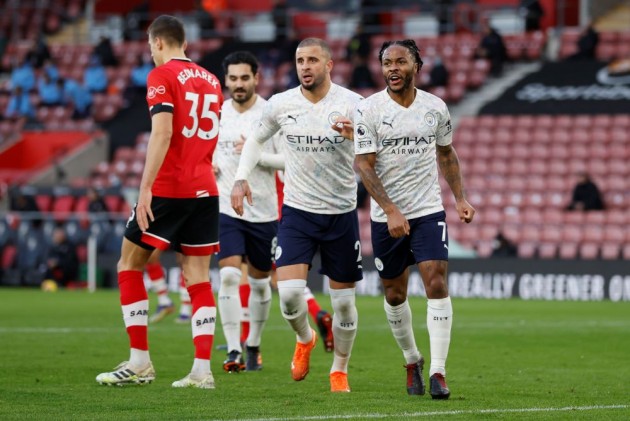 Manchester City returned to winning ways in the Premier League with a 1-0 victory away to Southampton on Saturday. (More Football News)

After back-to-back draws with Manchester United and West Brom, and with neither Sergio Aguero nor Gabriel Jesus starting at St Mary's Stadium, there was pressure on Pep Guardiola's men to find a way past a Southampton side who have looked one of the most impressive in the league this season.

A goal from Raheem Sterling proved decisive, the England international producing a composed finish in the first half to secure maximum points on the south coast.

Saints pushed hard in the second half but could not break through a resilient City defence as they suffered just a fourth league loss of 2020-21.

City weathered some early Southampton pressure and forced Alex McCarthy into a smart save to keep out a powerful shot from Joao Cancelo.

The breakthrough came in the 16th minute, Kevin De Bruyne given space to cross for Sterling to sweep home first time from near the penalty spot.

Saints responded well, threatening through Danny Ings – who wanted a penalty from a high boot by Ruben Dias – and a header from Jannik Vestergaard that Ederson held.

De Bruyne missed a good chance on the break as Ralph Hasenhuttl's side stepped up the pressure after the interval, enjoying close to 53 per cent of the possession in the second half having had less than half the ball in the first.

Che Adams was just unable to turn a header on target after a defensive mix-up but that was a rare moment of uncertainty at the back from City, who have now kept four clean sheets in five league matches.

McCarthy saved superbly from an Ilkay Gundogan strike but the home side could not find a way to place Ederson under similar pressure.

What does it mean? City stay resolute in title hunt

Liverpool's earlier 7-0 demolition of Crystal Palace delivered an ominous warning to the rest of the title hopefuls.

City's victory was less emphatic but required a huge amount of the defensive strength they have shown in recent weeks.

They are now a point behind fourth-place Southampton and eight adrift of leaders Liverpool, but they do have a game in hand.

Sterling has been involved in 149 goals under Guardiola, more than any other player, and his ruthlessness was crucial here as he converted one of City's four shots on target.

With Sergio Aguero struggling with a knee problem and Gabriel Jesus missing here, keeping Sterling fit and firing could be hugely important for Guardiola's plans this term.

Losing Ings to injury in the first half left Southampton looking blunt in the final third, despite some excellent play in creating openings.

Any long-term problem to the striker would be a huge setback to their European aspirations.

- Following their 1-0 victory today, no side have conceded fewer goals (12) or kept more clean sheets (6) than Manchester City in the Premier League this season.
- Guardiola has won six of his seven meetings with Hasenhuttl in all competitions (L1), with the only exception being Southampton's victory in this exact fixture last season.
- Sterling has been directly involved in 11 goals in 16 Premier League games against Southampton (seven goals and four assists) – only versus West Ham (14) has he had a hand in more goals against an opponent in the competition.
- De Bruyne has registered 15 Premier League assists in 2020; three more than anyone else, while only in 2017 has he assisted more Premier League goals in a calendar year (18).
- Since the start of last season, only Mohamed Salah (45) has been directly involved in more Premier League goals than De Bruyne (42 – 15 goals, 27 assists).

City face Arsenal on Tuesday in the EFL Cup quarter-final before next Saturday's league visit of Newcastle United. Southampton have a week to prepare for a trip to Fulham.