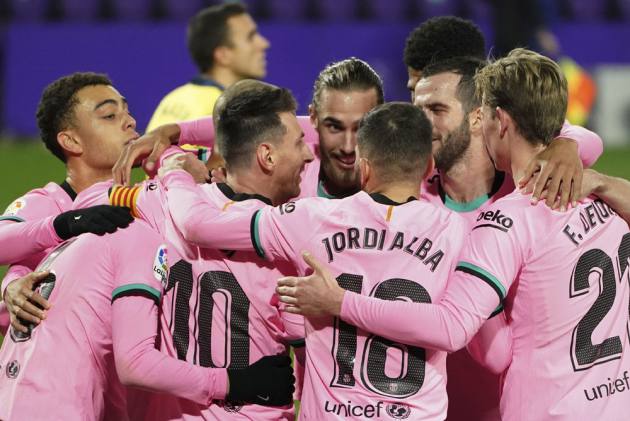 After drawing level with Pele's haul of 643 goals for Santos with a header in a 2-2 draw with Valencia on Saturday, Messi made it 644 in Barca colours across all competitions on Tuesday.

Having created Clement Lenglet's opener before playing a key part in Martin Braithwaite making it 2-0 before the interval, Messi swept home from Pedri's clever flick in the 65th minute.

It rounded off a fine performance from Ronald Koeman's side, who ended their winless run in LaLiga away games at the fifth time of asking.

Messi was inches from opening the scoring in the seventh minute, bending an effort just wide of the left-hand upright from 25 yards out.

Barca's captain went closer when he forced Jordi Masip into a fine save in the 21st minute, but he crafted the opener a moment later.

Lenglet latched onto Messi's inch-perfect cross to head home into the top corner – the former Sevilla defender paying tribute to Barca youngster Moussa Wague, who is facing a lengthy lay off after sustaining a serious knee injury while in action for PAOK, where he is out on loan, last week.

Messi was integral to Barca's second 14 minutes later, threading a superb pass into Sergino Dest, who squared for Braithwaite to finish.

Having missed two presentable chances towards the end of the first half, Messi was agonisingly close to getting on the end of Miralem Pjanic's fantastic pass shortly after the restart.

Pablo Hervias' free-kick from a tight angle nearly found the top-right corner as Valladolid looked to haul themselves back into the contest, though Masip had to deny Messi at the other end.

But Messi had his record-surpassing goal soon after, the 33-year-old capping off the win with a typically composed finish after combining brilliantly with Pedri.

As Barca cruised into fifth place, Messi almost added further gloss in stoppage time, but his close-range shot was kept out by the post, with the woodwork also denying Philippe Coutinho.

What does it mean? Rijkaard record remains intact

Barca had last gone five away league games without a win in a single LaLiga season in 2008, when they drew two and lost four under Frank Rijkaard.

Fortunately for Koeman, he has avoided the same fate as his compatriot, and Barca are now just one point shy of the Champions League places, though they are eight adrift of pacesetters Atletico Madrid, having played a game more.

After failing to score and assist in his five LaLiga appearances in October, Messi has scored six times in his last eight league games, while he has also registered eight direct goal involvements in his last four top-flight meetings with Valladolid (four goals and four assists).

His record-setting goal saw him surpass Brazil great Pele, who had netted 643 times for Santos between 1956 and 1974, for goals at one club, while only Real Betis veteran Joaquin Sanchez (17) has provided at least one assist in more LaLiga seasons than Messi (16).

16 - Only Joaquín Sánchez has completed more seasons to have provided at least one assist in @LaLiga (17) than Lionel Messi (16). But the Argentinian is the player to have recorded the most league seasons in a row providing since at least 1998/99 season. Mate @FCBarcelona pic.twitter.com/BQs7J7fFZn

Marc-Andre ter Stegen did ultimately end up having to work, with the German making five saves and Valladolid mustering 12 total attempts.

However, they were almost all from distance, with the hosts managing just 12 touches inside Barca's area in total and the majority coming in the closing stages.

- Messi's goal for Barcelona ended a sequence of 20 passes in a row, the longest move for a goal so far in the 2020-21 season.
- Lenglet scored his seventh goal for Barcelona in all competitions, six of them coming with his head. Messi has set up three of them, the most among Barca players.
- Braithwaite has been involved in six goals in his eight games as starter for Barcelona in all competitions (five goals and one assist), but has zero goal involvements in his seven games as sub.
- Messi has scored and assisted in three games this season (vs Ferencvaros at home, vs Juventus at Allianz Stadium and vs Valladolid), more games than any other LaLiga player in all competitions.
- In-form Messi has at least 10 shots in five out of his last six games. His 54 shots from those five games is more than any other LaLiga player across the whole season, except Real Madrid's Karim Benzema (58).

Both teams have a week off over Christmas, with Barca's final game of 2020 seeing them host Eibar, while Valladolid travel to Cadiz. Both games take place on December 29.