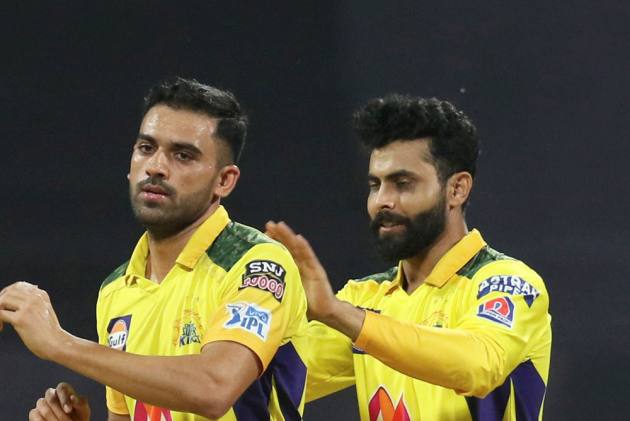 Chennai Super Kings captain Mahendra Singh Dhoni is extremely pleased with the growth of Deepak Chahar as a matured death bowler as the medium-pacer took four wickets to star in their win over Punjab Kings, in Mumbai on Friday.

CSK beat Punjab by six wickets to record their first win of the season.

"Overall the years, he has matured into a death bowler too but he's somebody who gets more purchase than other bowlers. If you're looking to attack, why not finish his first four overs. Bravo can bowl at the death. It's not a secret," Dhoni said.

Recalling the IPL journey, Dhoni, who played his 200th match for CSK, said it was a very long one and made him feel good.

"It started in 2008 - played in SA, Dubai, and back home. Never thought Mumbai would be our home."

He was not happy with the relaid pitch at the M A Chidambaram stadium in Chennai.

"After the wicket was relaid, we found it difficult to adjust to conditions. This is a very good wicket, but it depends on the conditions on that day. The ball moved today, but it didn't swing around a lot. There was no dew and enough seam movement," he added.

Punjab captain K L Rahul was disappointed with the performance.

"There's not much more to say. If any team loses five wickets in the first seven or eight overs, it's always going to be catch up. They bowled well, we played some bad shots, that's how the game goes.

"It (pitch) was a lot more sticky and tacky than what it looked like. Credit to the CSK bowlers, they bowled in the right channels, Deepak with his knuckle balls got a couple of wickets, getting myself run-out doesn't help the team."

Chahar said it wasn't a 100-110 wicket, adding it was good learning for the team.

"We have pace in our attack, we obviously want to use that. The first game didn't go too well for those two (Richardson and Meredith), it was their first game and I am sure they were a bit nervous.

"That was the chat after the game as well, that's how IPL goes. It can be tough and cruel. Their plans were clear, they did execute it pretty well."

He said he got the responsibility to bowl the first over and set the tone.

"It's a big responsibility for me in the last four years and Mahi bhai has shown faith in me. As a bowler, this is my plan always. You may not take wickets in T20s, so my plan is to bowl dots in powerplays," Chahar signed off.