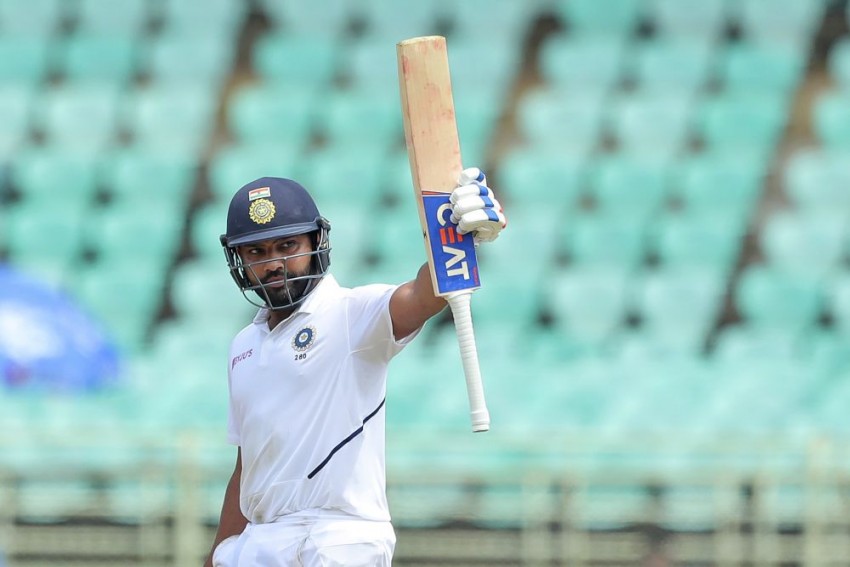 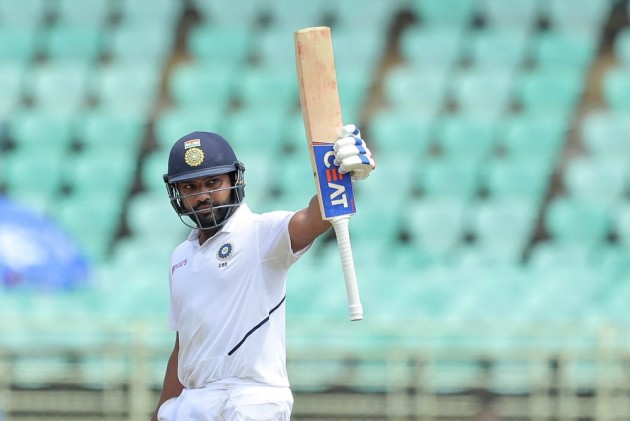 South Africa lost first innings centurion Dean Elgar's wicket to be 11/1 at stumps on Day 4 of the first Test after India set an improbable 395-run victory target courtesy Rohit Sharma's (127) second century of the game. Rohit, who scored 176 in the first innings, became the first ever batsman in the history of the game to score two centuries in his first Test as an opener. He was supported by Cheteshwar Pujara, who hit 81. India declared second innings at 323/4. Get here ball-by-ball commentary, highlights of fourth day's play of India vs South Africa at ACA-VDCA Cricket Stadium, Visakhapatnam (SCORECARD | CRICKET NEWS)

17:16 hrs IST: The light's deteriorated through the last hour. That will be the end of day's play here, with India needing nine more wickets to secure a win.

17:01 hrs IST: OUT! Jadeja gets rid of the first innings' centurion - Elgar - early. Skidded on from round the wicket, stayed low, went under Elgar's bat and trapped him in front. Initial decision was not out but the hosts reviewed it straightaway. Theunis De Bruyn comes to the crease. South Africa are 5/1

16:51 hrs IST: Extremely good over from Ashwin. South Africa are 2/0. Jadeja comes into the attack.

16:48 hrs IST: Markram and Elgar are at the crease. Markram on strike. Ashwin will open the attack

16:37 hrs IST: That's it. India declare on. South Africa need 395 runs to go 1-0 up in the three-match series. The hosts will have 13 overs to bowl at the Proteas, light permitting. Rohit's century laid the platform for a big lead. Pujara too played pretty well after a sedate start. Join us in 10 minutes for the action.

15:52 hrs IST: OUT! Rohit has been stumped for the second time in the game! 303 runs across two innings. Rohit's actually disappointed that he has lost his wicket, but he can be proud of what he's achieved. Du Plessis walks up to the India opener and congratulates him. Virat Kohli comes to the crease. India are 240/3, lead by 311.

15:30 hrs IST: Single and that's a century for Rohit. Acknowledges the applause! The first batsman ever to score two centuries on debut as an opener. Touch full from Philander, and Rohit helps it to midwicket. What a player! India are 204/2, lead by 275.

15:20 hrs IST: OUT! Pujara trapped in front. Given out LBW, but the Indian has referred this. Straightens off the seam (Philander the bowler), Pujara looks to defend but misses the outside edge, and strikes him below the thigh pad on his back leg. End of a magnificent innings - 81(148). Ravindra Jadeja comes to the crease. India are 190/2, lead by 261.

15:04 hrs IST: Welcome back for the final session. Rohit and Pujara making their way out to the middle. Philander to resume proceedings.

14:00 hrs IST: FOUR! Full from Rabada, outside off, Pujara leans into the drive and gets it between backward point and cover. Brings up his half-century. His first in his last five innings. Needs to convert this into a big one. India are 122/1, lead by 193 runs. Rohit 60*

Goals by Navjot Kaur and Gurjit Kaur helped the Indian women's hockey team hold hosts Great Britain to a draw in the last match of the Tour to England held at Marlow, England on Friday (October 4). Goalkeeper Savita achieved a feat during the contest. READ HERE

13:29 hrs IST: Rohit has been caught on the boundary, but the umpires are checking. Looks like Muthusamy touched the rope. Could be six. And SIX it is! He survives. Piedt is still wicketless. India are 98/1, lead by 169. Rohit 56*, Pujara 34*

13:16 hrs IST: Single and that's a half-century for Rohit. Length delivery from Maharaj, on middle stump, the Indian drives to long-on. Gets a nice ovation. He's having a terrific game. India are 82/1, lead by 153.

13:12 hrs IST: FOUR! Length ball from Piedt, outside off, Pujara steps out and makes it to the pitch of it and flicks this fine of midwicket and into the square leg boundary. Poor over from the offie, nine off it. India are 73/1, lead by 144. Rohit 49*, Pujara 16*

13:00 hrs IST: Drinks are on the field now. India are 63/1, lead by 134. Rohit 47*, Pujara 8*. The India No. 3 needs to make sure that he doesn't throws his wicket away. He hasn't scored that many runs lately and this innings is very crucial for his confidence.

12:50 hrs IST: FOUR! Another length delivery, this time from Maharaj, Rohit opens the bat face at the last moment and guides it past the short third man for a boundary. India are 61/1, lead by 132. Rohit 45*, Pujara 8*

12:39 hrs IST: SIX! Length ball from Dane Piedt, Rohit dances down the track and hammers it over wide long off region for a maximum. Sweeps the next ball, a fuller one, to fine leg. Costly over from the offspinner, 10 off it. Rohit into 40s now. India are 52/1, lead by 123. Pujara 4*

Meanwhile, Dr. Vijay Patil, the trustee and the president of the DY Patil Sports Academy in Navi Mumbai, is now the new MCA president. He had lost to Sharad Pawar in the 2015 MCA elections. He is now joined by fellow newcomers, Amol Kale and Sanjay Naik, in the posts of the vice-president and the secretary respectively.

12:12 hrs IST: Welcome back for the post-lunch session. Philander will start. Rohit on strike.

South Africa added 46 this morning and cut the deficit to 71. Ashwin taking the last two wickets to finish with a 7-for. Maharaj then produced a proper delivery for Agarwal's outside edge. We'll be back in about 35 minutes. Stay tuned!

11:09 hrs IST: OUT! Length ball from Maharaj, bounces, Agarwal gets an outside edge and Du Plessis takes a simple catch at first slip. Cheteshwar Pujara comes to the crease. India are 21/1, lead by 92 runs.

World No. 1 T20 team Pakistan take on an inexperienced Sri Lanka in the first of a three-match series in Lahore on Saturday (October 5), starting their preparation for next year's World Cup in the shortest format. Pakistan will also play three T20 matches in Australia next month before hosting Bangladesh and later travelling to Ireland and England, all ahead of the T20 Asia Cup.

"He's someone you don't want to mess with because he bowls the ball at serious speeds and he's a competitor off the field even when we're playing against each other.

"There's no mercy, even for the guys who play for the same country - he's always very competitive." - KL Rahul speaks about one of his teammates. READ HERE

10:43 hrs IST: FOUR! Too short from Maharaj, and Rohit pulls firmly to the midwicket boundary. India - 4/0 - would hope for more of these.

10:40 hrs IST: Excellent first over from Philander. Maiden! Get a feeling something is going to happen here. India are 0/0. Maharaj, left arm orthodox, comes into the attack.

10:35 hrs IST: Time for India's reply. Agarwal and Rohit are at the crease. Philander will open the attack.

10:25 hrs IST: OUT! Huge appeal for LBW and India have reviewed this. THREE REDS. Ashwin finishes with seven scalps. Rabada departs for 15. Ball pitches around middle, but it still goes on to strike the leg stump. India take a 71-run first-innings lead. Some solid individual performances from both sides.

10:21 hrs IST: FOUR! Fuller from Ishant, and Muthusamy drives straight back down the wicket. Hanuma Vihari, the fielder at mid-on, dives but fails to stop the boundary. South Africa are 431/9. Muthusamy 33*, Rabada 15*

Hardik Pandya has undergone a lower-back surgery in London, it was confirmed on Saturday (October 5). The India allrounder has been troubled by the injury for quite a while now and was rested for the Test series against South Africa. He is expected to be out of action for five months.

09:55 hrs IST: OUT! Tossed up from Ashwin, outside off, Maharaj looks to clear the long-on boundary, but doesn't get the timing and (Mayank) Agarwal does the rest. Easy one! Sixth wicket for the offspinner. Kagiso Rabada comes to the crease. South Africa are 397/9

09:49 hrs IST: Muthusamy is a solid player with the bat. Can very well be a long-term option in Tests. The way he's negotiating Shami and Ashwin should be an encouraging sign for the Proteas.

Meanwhile, Harbhajan Singh has quashed any retirement talks and said he'll play for Chennai Super Kings (CSK) in the IPL next season. There was speculation that the offspinner might be forced to announce his retirement after he became one of the 25 overseas players to enter the draft of England's new city-based franchise league 'The Hundred' scheduled to be held in London on October 20. READ HERE

09:38 hrs IST: Fine start from Ashwin. Getting both Maharaj and Muthusamy to try and drive is what the Indian should be looking to do. South Africa are 387/8

09:35 hrs IST: Nice and tidy over from Shami. It's a maiden! We could have a lot more wickets today as the cracks have opened up. There are a few spots which will cause batsmen some worry. South Africa are 385/8. Muthusamy 12*, Maharaj 3*

09:31 hrs IST: The first ball of Day 4 is about to be delivered. Keshav Maharaj takes strike. Shami now

09:01 hrs IST: Elgar - "It's good to contribute once again. Playing in India is very tough. The last time I was here, I was not very experienced. In those four years, I have grown a lot as a cricketer. I have played county cricket, which has helped. (Change into his game) If you want to use our last series in India, we shouldn't use that because of the wickets. You need to defend well against spinners, because then you give yourself the best chance of attacking. County cricket with Surrey has helped a lot. Playing spin is something I have been conscious of, and you will face a lot of spin when coming to India. (Hitting the ball in the air) I think you have to find your strengths. That's a strength of mine, and thankfully it worked out in this game."

DID YOU KNOW? The 164-run stand between Dean Elgar and De Kock is the highest ever sixth-wicket partnership for South Africa against India.

STAT ATTACK - Quinton de Kock on Friday (October 4) became the second South Africa wicketkeeper to score a Test century in Asia after AB de Villiers, who hit 164 against Pakistan in Dubai in 2013-14.

08:39 hrs IST: Hello and welcome to Outlook's live coverage of Day 4 of the opening Test between India and South Africa.

Take any side in the world, and present them with a proposition of facing a 300+ opening stand with Kohli still to bat? Well, 99% of opponents would tremble. But the Proteas breathed fire, as one would see in their many social media posts, and that has put the top-ranked Test side in a spot of bother. And that fire of doubt is still burning hot, if not bright, at Vizag. Two days left in the match, and India find themselves negotiating the visiting batsmen [in a dust-bowl, if you care], reminding everyone of a certain Mazumdar.

There are loads of questions to be answered. But first, let's pass Day 4, and if possible Day 5. That's enticing enough premise to ditch a team.