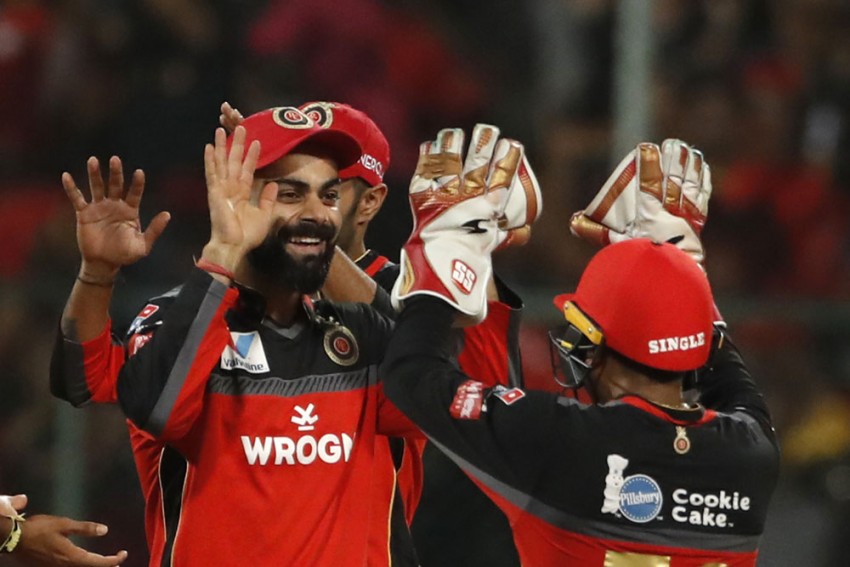 Virat Kohli and RCB signed off their IPL 2019 campaign in style with a raucous home crowd rooting for the embattled players through the night.

SRH have the match in their hands, but despite posting a good total ended up losing the match and compromising their chance to qualify for the playoffs.

Doing the damage were a 144-run stand between Shimron Hetmyer and Gurkeerat Singh Mann, which is the second highest this season and dropped catches.

SRH now need KKR to lose to go through.

Man of the Match: Shimron Hetmyer

11:39 PM IST: Mohammad Nabi with the last over. Umesh Yadav hits the first ball for a four. A half volley and to third man. Two needed off five. And the second one goes through too. RCB win by four wickets, with four balls to spare.

11:26 PM IST: Rashid Khan on with his last over. Gurkeerat Singh Mann pulls the first ball for a six, flat over deep backward. A single, then Shimron Hetmyer hits the third ball for a six over long on. Then, the wicket. Vijay Shankar takes a very good catch at long-off. FoW-164/4 (17.4 Over). Hetmyer is upset with himself. He made 75 off 47.

11:17 PM IST: Vijay Shankar gets his first over. Gurkeerat Singh Mann hits the first ball for a four to deep mid-wicket. He's on 47. A single, then a wide to Shimron Hetmyer A single to long off. A four through backward point and fifty for Mann, his second in IPL. He takes 39 balls. Then another, this time to backward square leg. Bhuvi fails to stop it. Another misfield at square. 16 runs from the over. RCB-146/3 after 16 overs. They need 30 from 24. Time out.

11:11 PM IST: Gurkeerat Singh Mann nearing his fifty. Just hit back-to-back fours off the third and fourth balls. Kane Williamson goes for a review for a caught behind. Very close, that's what Manish Pandey thought. And wasted the review. Wicketkeeper Wriddhiman Saha was quiet. Nine runs from the over. RCB-130/3 after 15 overs. They need 46 from 36. Mann is on 42 off 36. Thampi completes his spell for figures of 0/29.

11:05 PM IST: Rashid Khan on with his third over. A four off the second ball, hit by Shimron Hetmyer to long off. Six runs from the over and 101-run stand for Hetmyer and Gurkeerat Singh Mann in 67 balls. RCB-121/3 after 14 overs.

11:01 PM IST: Yusuf Pathan drops a sitter at backward point to give another life to Shimron Hetmyer. 13 runs from the over, including a six and a four. Bhuvneshwar Kumar's figures after three overs: 2/20. RCB-115/3 after 13 overs.

10:31 PM IST: Mohammad Nabi gets his first over. Seven runs from the over, including a four off the last ball, hit by Shimron Hetmyer. RCB-56/3 after seven overs.

10:22 PM IST: Another good over for RCB. 10 runs from Rashid Khan's first over, including a six off the fourth ball, hit by Shimron Hetmyer over cow corner. RCB-45/3 after five overs.

10:17 PM IST: Huge over for RCB. 15 runs from Khaleel Ahmed's second over. Shimron Hetmyer hits the second and the third balls for fours, then Gurkeerat Singh hits the fifth ball for another. RCB-35/3 after four overs.

10:00 PM IST: Bhuvneshwar Kumar dismisses Parthiv Patel, off the third ball, caught by Manish Pandey at backward point. Then, Virat Kohli hits the fourth ball for a four to backward point. Six runs from the over.

9:42 PM IST: Umesh Yadav with the last over. Kane Williamson hits the first ball for a six over long off, and fifty for the captain, in 38 balls. A four off the second ball, to long off. A six off the third ball, over deep square leg. A four off the fourth, to sweeper cover. That's 20 from four balls. No ball for the front foot, and two mid-wicket. And Yadav is angry. That's not a no ball. And everybody sees it. Free hit stands. Nigel Llong, what have you done? A single to backward square leg. A four to fine leg to end the over. 28 runs from the over. Yadav's figures: 0/46. Williamson unbeaten on 70 off 43. SRH-175/7. And Virat Kohli is furious.

9:24 PM IST: Mohammad Nabi is the new man for SunRisers. Kane Williamson hits the first ball for a four. A dot and a single. Nabi hits the fourth ball for a four, then a dot. Then, Navdeep Saini had him caught at mid-on by Gurkeerat Singh. FoW-137/6 (16.6 Over). In the previous over, Yuzvendra Chahal conceded six runs for a wicket. His figures: 1/24.

9:11 PM IST: Kulwant Khejroliya returns for his third over. Kane Williamson hits the second and sixth balls for sixes. 15 runs from the over. SRH-122/4 after 15 overs.

9:01 PM IST: Colin de Grandhomme gets his first over. Vijay Shankar hits the first ball for a six, over long on. A double, then four singles.12 runs from the over. SRH-93/3 after 13 overs.

8:54 PM IST: Umesh Yadav returns for his third over. Eight runs from it, including a four off the fourth ball, beautifully hit by Kane Williamson through mid-wicket. SRH-79/3 after 11 overs.

8:49 PM IST: Eight runs from Washington Sundar's second over, including a four off the last ball by Kane Williamson. SRH-71/3 after 10 overs.

8:47 PM IST: Kulwant Khejroliya on with his second over. Tidy one. Singles off the last two balls. SRH 63/3 after nine overs. They scored 44 without losing a wicket in the first four overs, but lost three for 19 in the next five.

Two key wickets for @Sundarwashi5 in his very first over. Pandey and Guptill back in the hut.#SRH 63/3 after 9 overs pic.twitter.com/2NAwbqxNJ5

8:41 PM IST: Washington Sundar on with his first over. He had Martin Guptill caught at mid-wicket by Virat Kohli. The Kiwi is angry with himself. Kane Williamson is the new man. Then, Shimron Hetmyer seems to have taken a stunning catch at deep square leg. Soft signal is out, but the review shows the ball touching the ground while rolling over. Third umpire thinks that's out. FoW-61/3 (7.5 Over). Pandey made nine of two. Vijay Shankar is the new man. Two wickets and two runs from the over. SRH-61/3 after eight overs.

8:34 PM IST: Kulwant Khejroliya, who became a target of Virat Kohli for that overthrow, gets his first over. Manish Pandey hits the first ball for a four, through mid off. Then three singles. Seven runs from the medium pacer's first over. SRH-59/1 after seven overs.

8:23 PM IST: Navdeep Saini on with his second over. One leg bye and a single, then the wicket of Wriddhiman Saha, caught at mid on by Umesh Yadav. FoW-46/1 (4.3 Over). Saha made 20 off 11. Manish Pandey is the new man. One bounce to deep extra cover fence. Brute power from Martin Guptill. Seven runs from the over. SRH-51/1 after five overs.

8:17 PM IST: Wriddhiman Saha toying with Yuzvendra Chahal and Virat Kohli. Every time, RCB move a fielder, Saha hits a four to the vacant area. Hat-trick of fours to start the over. And three singles. 15 runs from the over. SRH-44/0 after four overs.

8:13 PM IST: Umesh Yadav continues with his second over. Martin Guptill hits the first ball for a six over cover. A dot, then two singles. Yuzvendra Chahal drops Wriddhman Saha at deep square leg off the fourth ball. Two dots and eight runs from the over. SRH-29/0 after three overs.

8:08 PM IST: Navdeep Saini shares the new ball. A dot to Martin Guptill, then the Kiwi hits the next two balls for a four and a six. Then, five overthrows from Virat Kohli himself. Then, Wriddhiman Saha plays a sublime cover drive for a four. 19 runs from the over. SRH-21/0 after two overs.

8:04 PM IST: Brilliant fist over from Umesh Yadav. A single to Wriddhiman Saha off the first ball then another single off the last ball, to Martin Guptill.

Virat Kohli's Royal Challengers Bangalore will be playing for pride after their hopes of entering playoffs went up in smoke after their match against Rajasthan Royals was abandoned due to rain.

But, SunRisers Hyderabad would look to complete the unfinished business and seal their place in the Indian Premier League (IPL) playoffs when they clash with laggards RCB.

The defeat against Mumbai Indians via Super Over must be hurting but they need to shrug it off and add two points to take their tally to 14, good enough to stay in top-4.

Despite their defeat against Mumbai, Hyderabad's net run rate is +0.653, which is superior to others in contention for the playoffs.

Even if Hyderabad lose their last match, they can still reach playoffs if Kolkata Knight Riders and Kings XI Punjab don't win more than one of their last two matches.

In the absence of their batting mainstay David Warner, young Manish Pandey (71 off 47 balls) shouldered the responsibility pretty well in the last match against Mumbai as he pushed the match into the super over after he carted Hardik Pandya for a last-ball six to bring the scores level.