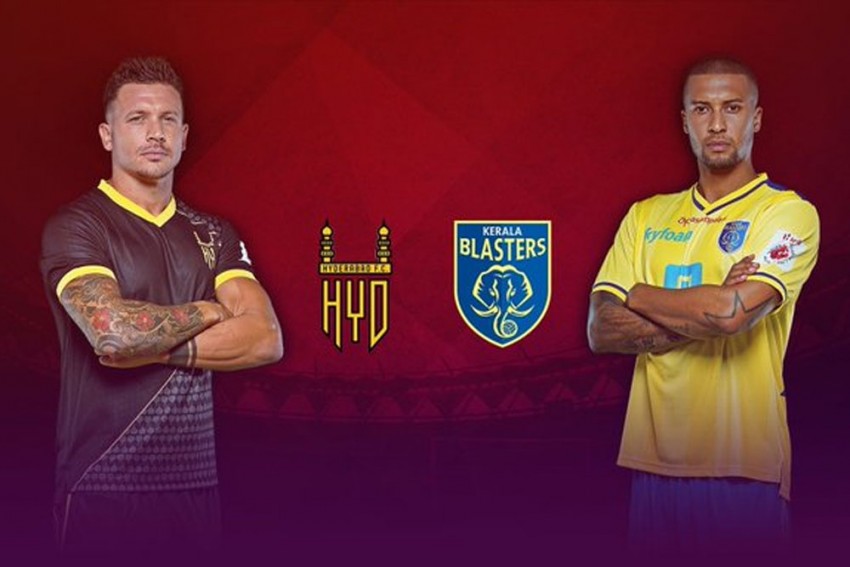 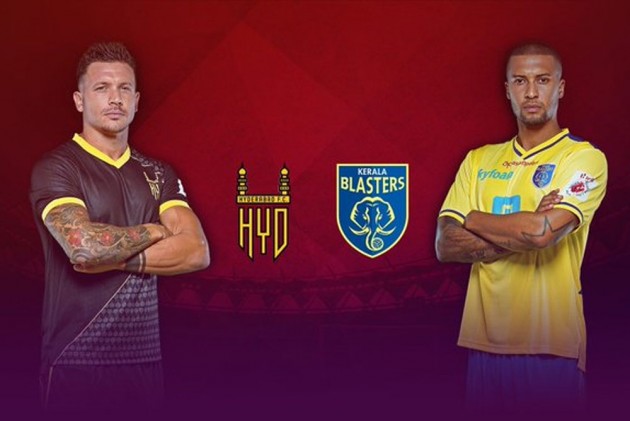 Struggling with fitness issues and against the odds, Hyderabad FC produced a morale-boosting win in their maiden home game to beat two-time Indian Super League (ISL) finalists. The 14th match of the 2019-20 ISL season at Balayogi Athletic Stadium was strewn with errors, most of those basics, but a moment of brilliance from Marcelo Pereira aka Marcelinho made the encounter worthwhile. Indian teenager KP Rahul opened the scoring with a scrappy yet a brave goal, by lunging himself in from of onrushing Hyderabad goalie Kamaljit in the 34th minute. But the hosts responded strongly in the second half, scoring two goals -- a cool penalty conversion from Marko Stankovic after Mohammed Yasir earned it courtesy Mouhamadou Gning's tackle in the 54th minute. Then, Marcelinho's stunner in the 81st minute. Tomorrow, we have a mouth-watering clash between Jamshedpur FC and defending champions Bengaluru FC at the Furnace.

Get highlights of Hyderabad FC vs Kerala Blasters match here:

90+5' - With seconds remaining, Kerala Blasters win a free-kick at a dangerous position. Direct. Everyone seems tired, but poor defending from the hosts.  Good delivery. But this time, Hyderabad defenders do well. And that's it. Hyderabad win their first game, that too at home.

90+3' - Halicharan Narzary blocks Marcelinho near the touchline and the Hyderabad hero falls down. Some theatrics and he is the man of the match tonight. An all-round show, all things accounted.

90+2' - Marcelinho draws a foul from Jairo Rodrigues and the Brazilian shows his experience. Stays down, taking time. Free kick to Rodrigues.

90' - Yet another move from Kerala Blasters, an all-out attack. But Hyderabad look resolute in defence. Five minutes added on.

87' - Hyderabad's injury list grows. Robin Singh pulls his hamstring and is subbed, by Tarif Akhand. Moments ago, Marcelinho was booked.

86' - Still time for Kerala Blasters to find the equaliser. Meanwhile, Shankar Sampingraj and Robin Singh are struggling to run. Then, some crazy defending from Hyderabad.

81' -GOAL! Free-kick to Hyderabad at a dangerous spot. Moustapha Gning brings down Nikhil Poojary, and Marcelinho produces a brilliant, brilliant free-kick to beat TP Rehenesh right into the top corner. No goalkeeper's blocking that. Remarkable set-piece. Fifth goal in nine matches for him against Kerala.

78' - Gurtej Singh is losing his battle with KP Rahul. Gets a booking for a late tackle on the youngster.

76' - Jairo Rodrigues allows Marcelinho to glides through with the ball and the Brazilian almost, almost scores with his brilliant curler from the right top-edge. Misses by inches.

75' - Mohammed Yasir fails to man his man and allows Prasanth Karuthadathkuni to make a good looking header from a cross. Straight to the goalie, lucky Hyderabad. Then, Marko Stankovic tries a long ranger.

73' - Jessel Carneiro almost stuns the packed Hyderabad crowd with a thunderous strike. A left-footed drive with some venom. Misses the target by a whisker.

71' - Bartholomew Ogbeche continues to make Hyderabad defenders amateurish. He goes for Messi Bouli in the box, but Kamaljit Singh reaches to the ball first. Palms away.

68' - Nikhil Poojary commits a foul to give away a needless free-kick. Near the edge of the box. Messi Bouli does well to make the most out of his fall.

66' - Another opportunity for Bartholomew Ogbeche. Good leap for a header from a cross, but Matthew Kilgallon is strong and tall.

63' - KP Rahul, what a run. The teenager cuts inside from the left and sends a low pass for Bartholomew Ogbeche. But the skipper just manages a timid final attempt.

58' - After a brief stoppage, play resumes with Kerala Blasters on the ball. Bartholomew Ogbeche releases a long ball for KP Rahul, but the young Indian fails to keep the ball in play. Goal-kick.

57' - Hyderabad defender Matthew Kilgallon is down. Struggling to stand up. Probably muscle issue.

57' - Sub for Kerala Blasters. Sahal Abdul Samad, who's brilliant so far, makes way for Messi Bouli. Then, Marcelinho almost scores a wonder goal. Takes control of the ball some 35 yards outside of the goal and takes a volley. Just misses the target.

54' - GOAL! Then, Moustapha Gning brings down Mohammed Yaseer inside the Kerala Blasters box. A penalty. And one of the coolest spot-kicks you will ever see. Marko Stankovic sends the goalie wrong way and slots it home on the bottom corner.

52' - From the Kerala Blasters corner, Hyderabad launch a counter-attack with Marcelinho releasing a through ball. And the Indian player wastes one again. Poor poor decision-making, overindulging.

50' - Matthew Kilgallon blocks a dangerous looking cross, then from the following play, Sahal Abdul Samad earns a corner, strangely. These officials are joke. The ball was clearly out . A goal kick, it should have been.

49' - What a waste. Robin Singh fails to control the ball from a brilliant Marcelinho pass. He just needed to kick. And he failed, as usual. Hyderabad did manage to win a corner and a clearance off the line.

47' - Rohit Kumar pushes Sahal Abdul Samad at the centre of the field and free-kick to Kerala Blasters. From the following play, Prasanth Karuthadathkuni tests Hyderabad goalie.

46' - Kerala Blasters start the proceedings in the second half. And an early foray from Hyderabad.

8:35 PM IST: Players are back. Get ready for second half.

Big upgrade for 19-year-old KP Rahul (Rahul Kannoly Praveen). The former Indian Arrows player made the difference, albeit a scrappy one, in his first game. Three attempts and one goal. Good outing. Kerala found themselves losing Gianni Zuiverloon early in the match due to an injury. All in all, not the best of games with poor passings, losing second balls too easily from either side.  And Kerala Blasters skipper Bartholomew Ogbeche was the busiest man though. He's everywhere.

45+3' - Bartholomew Ogbeche gets another chance. His header is off-target though. On the counter, Robin Singh is tackled by Raju Gaikwad. But the referee looks the other way. It's a clear foul. Kerala are lucky.

45' - Yellow card for Abhisek Halder, for a clumsy challenge. Two minutes added on.

44' - It's all Kerala Blasters in Hyderabad. The visitors are making all the right moves and lots of attempts. Meanwhile, Marcelinho releases a left-footed flier to test Kerala goalie TP Rehenesh. Straight to the goalie.

42' - Another brilliant move from Blasters, but Bartholomew Ogbeche fails to make the most out of it.

39' - Then, Kerala Blasters presents themselves with a couple of brilliant attempts, with the latest one coming from Bartholomew Ogbeche, from a Sahal Abdul Samad pass.

38' - Nikhil Poojary gets on with a brilliant run on the left, but once again, fails to find waiting Robin Singh at the centre. Hyderabad looking for a quick equaliser.

37' - Bartholomew Ogbeche gets another shot at the goal. Not hitting the target.

32' - Bartholomew Ogbeche goes with a long ranger but fails to hit the target. Then, from the goal kick, Abhishek Halder almost scores the opener after TP Rehenesh committed himself into the ball. Just misses the target.

31' - Marcelinho and Robin Singh, Hyderabad's two frontmen, linked up well to test Kerala defence. Then, KP Rahul and Gurtej Singh have another run-in with the Kerala man winning the tussle this time.

28' - KP Rahul produces a blistering run on the left flank but his frail body proves detrimental as Gurtej Singh overpowers him near Hyderabad box.

27' - Bartholomew Ogbeche gets an earful from referee R Venkatesh after a clash with Marko Stankovic. Referee opts not to give a foul and thus Kerala skipper escapes a booking.

26' - Marcelinho misses a one-on-one battle with a Kerala Blasters defender.

24' - Throw-in for Kerala Blasters and the worst crossing of the game so far. It's like a crossfield cross with no one to receive it. Goal kick for Hyderabad.

21' - Smart defending from Mohamad Rakip, to win the ball back, but fails to clear the threat. Kerala eventually get a move going and Rahul KP goes for the long ranger. No harm done for Hyderabad though.

18' - End to end exchange. Marko Stankovic indulges too much, after beating Mohamad Rakip on the left flank. Hyderabad players eventually lose possession inside the Kerala box. On the counter, Bartholomew Ogbeche sets up Prasanth Karuthadathkun. But the young Indian fails to keep the ball in possession.

16' - Rohit Kumar fails to control his long pass. Completely misses the team-mate at the right flank.

14' - Finally, Raju Gaikwad is on. And soon, Kerala Blasters made their move. A long ranger, but a futile attempt. Rahul KP at fault for going too early, too eager.

12' -  Hyderabad get a good move from a set-piece, a corner. But Marko Stankovic's corner fails to make an impression. Meanwhile, Raju Gaikwad waits on to enter the field as a sub.

10' - Early trouble for Kerala Blasters. Big blow. Gianni Zuiverloon is down and out. The big Brazilian was chasing Robin Singh but ends up getting himself stretchered out. Kerala are now one man down.

8' - Shankar Sampingraj, what are you doing. Holding onto the ball too long, and survives a Sahal Abdul Samad pressing, courtesy timely intervention form Kamaljit Singh.

5' - Rohit Kumar brings down Moustapha Gning in the Hyderabad box. Free-kick to Kerala.

3' - But the first real move comes from Kerala. Ever impressive Sahal Abdul Samad cuts inside Hyderabad box but his captain Bartholomew Ogbeche isn't ready to link up.

2' - Noise is deafening. Some 30 thousand fans here. And why not, good start from Hyderabad FC.

1' - Kick-off in Hyderabad. Hosts in black while Kerala Blasters are in yellow.

Hyderabad have conceded eight goals in the two matches so far, in 0-5 defeat at the hands of ATK and 1-3 reverse against Jamshedpur, while Kerala Blasters have defeated ATK 2-1 then suffered a 1-2 defeat against Mumbai City. Hyderabad are yet to open their account and are at the bottom of the table, while Kerala are seventh with three points.

Ahead of the fixture, during the pre-match press conference, Hyderabad FC coach Phil Brown expressed that his side is wary of their upcoming opposition. "They are a side that are built well. There were talks of some big changes in their side. I watched a few of their matches, especially the first one (Kerala Vs ATK), where ATK should’ve won but they didn’t. So, that shows that Kerala have got a lot of strength and some really good players, with flair. But, we are playing at home tomorrow. We want to stamp our mark in this tournament and it starts with these two home games," he said.

Meanwhile, visiting coach Eelco Schattorie said that Kerala Blasters will be cautious despite Hyderabad's poor form. "Of course, when you lose two times and play at home, there will be some pressure on them. I don’t think we have the advantage," he said.

Phil Brown will see his Hyderabad side probably play without Giles Barnes, Rafa Lopez, Nikhil Poojary and Sahil Panwar due to fitness problems. Also, Bobo is unavailable to play and Nestor Gordillo is suspended till December.

Meanwhile, the visiting side's Eelco Schattorie has a fully-fit squad except for Mario Arques due to injury.

After a poor start to the 2019-20 season of Indian Super League (ISL) debutants Hyderabad FC host two-time finalists Kerala Blasters in their first-ever home fixture at the Ganti Mohana Chandra Balayogi Athletic Stadium, on November 2, 7:30 PM IST. Amid muted celebrations marking the return football to the city of Nizams, Hyderabad FC's quiet and dull performances so far in the league have left many wondering, if the pride of the city will ever be restored.

Once known as the 'Football Factory' of India, Hyderabad now plays a peripheral role as the country embraces the beautiful game like never before. And tonight's game will tell if Hyderabad are really prepared for top-flight football. After all, the city is hosting probably the biggest football game in decades. But the task at hand is not easy. Blasters are a confident side and to start with, a draw would do for Hyderabad.

India Vs Bangladesh, 1st T20I: Could Shivam Dube Be Handed His International Debut? Here Is What Rohit Sharma Thinks