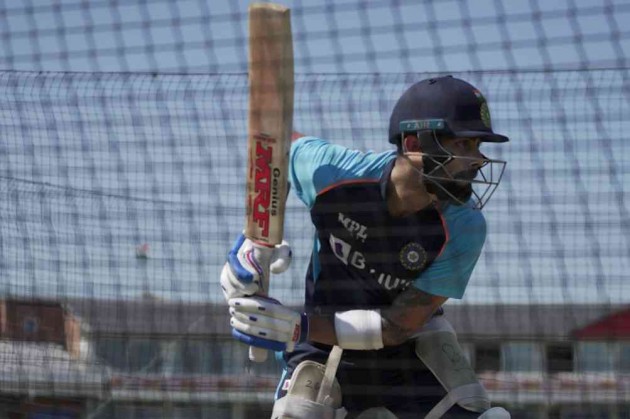 From captain Virat Kohli to swashbuckling opener Rohit Sharma, the top guns of the Indian team underwent an extensive net session at the Durham County Cricket Club on Saturday, preparing in earnest for the marquee Test series against England. (More Cricket News)

Besides Kohli and his limited overs deputy Rohit, one-down batsman Cheteshwar Pujara and KL Rahul also hit the nets, as they trained to tackle a challenge that is expected to test their skills against the moving ball when they stand up to the likes of James Anderson, Stuart Broad and Jofra Archer.

Before that, the Kohli-led Indian side is scheduled play a practice match against Combined Counties from July 20.

India, who straightaway jumped into the World Test Championship (WTC) final without having any match practice last month, were beaten by a well-prepared New Zealand side that had already played a two-match Test series against the hosts England.

Garani's positive report came on Thursday and other members of the India squad and the coaching staff, who were in contact with him, were isolated after that.

Bowling coach Bharath Arun, reserve wicketkeeper Wriddhiman Saha and India's standby opener Abhimanyu Easwaran are the three members of the Indian contingent in UK who have been isolated.

All three have tested negative for the virus, but have to follow the UK Government's Health Safety Protocol and stay in isolation.

Pant, Garani, Arun, Saha, and Easwaran are all in London and did not travel with the rest of the Indian contingent to Durham.

Both Pant and Saha are set to miss the practice, leaving Rahul to don the big gloves against Combined Counties.

Besides nets, the Indian players also underwent strength and mobility sessions as they regrouped for their upcoming challenges in the United Kingdom.