Dortmund has already conceded 11 goals in five Bundesliga games — the fifth worst record in the league. 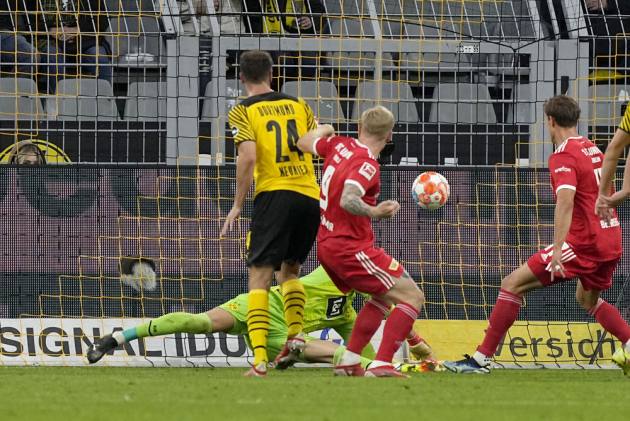 Dortmund has already conceded 11 goals in five Bundesliga games — the fifth worst record in the league — to take the shine off outstanding play from Erling Haaland, Marco Reus and Jude Bellingham.

Only Hertha Berlin, Stuttgart and the two promoted teams have a worse defensive record so far, and Sunday's 4-2 win over Union Berlin was a lot closer than the scoreline suggests. Dortmund was leading 3-0 before Union fought back to 3-2. Haaland extended the lead with his seventh league goal — his 11th in seven games for Dortmund this season.

But Haaland's extraordinary scoring record hides the reality of the team's troubles. Without the 21-year-old Norwegian's goals, Dortmund would only have three points from its last three Bundesliga games instead of nine.

"We have to work on its as soon as possible, because that's how we lose out and undo all the good work we've invested in the first 60 or 70 minutes," Dortmund captain Marco Reus said of his team's propensity to allow rivals fight back.

"We have to be much cleverer, so to be more grownup in our play, and improve especially when defending against set pieces. It's inexplicable. We will and have to talk about it in any case."

The problem is not a new one for Dortmund, which has been capable of dazzling attacks while crumbling in defense since Jürgen Klopp's last season as coach in 2015, when Dortmund finished seventh. A lack of consistency has led to repeated setbacks since.

"We know the problem for two years and three months, since I've been here," Dortmund defender Mats Hummels said.

"But we're still finding it difficult to address it."

Hummels returned to Dortmund in 2019 after three seasons at Bayern Munich. He was previously Dortmund captain in a mostly successful spell from 2008-16.

"If you look at the one big difference between Bayern Munich and us, then it's that at Bayern, 11 players are fired up and playing for success, the whole time," Hummels said.

Bayern, which is going for a record-extending 10th consecutive league title, routed promoted Bochum 7-0 on Saturday to take the Bundesliga lead. Wolfsburg is second on goal difference after dropping its first points in a draw with Eintracht Frankfurt on Sunday and Dortmund is third, a point behind the top two.

Dortmund next plays at Borussia Mönchengladbach on Saturday, where the home fans are sure to let Dortmund coach Marco Rose know how they feel about his switch between the clubs in the offseason.

Rose had a successful spell with Gladbach until he told the club that he wanted to leave for Dortmund. It triggered a negative run that led to the team missing out on European qualification when it had been a candidate for reaching the Champions League.

Rose's successor, former Eintracht Frankfurt coach Adi Hütter, is finding it hard to get Gladbach back on track. The team has only one win from its first five Bundesliga games and was unlucky to lose 1-0 in Augsburg on Saturday.

Rose attempted to diffuse what's sure to be a heated atmosphere at his former club.

"I'm looking forward to seeing people that I got to appreciate over two years," the Dortmund coach said.

"It's a great club with great people who are doing outstanding work. Rainer Bonhof, Hans Meyer, Max Eberl — they're all people I'm very much looking forward to seeing."