'Quitting Was My Hardest Decision' 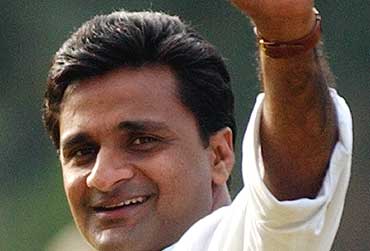 There is no other profession which could have given me the same fulfillment than representing my country. It was a privilege and honour to have donned the colours of my country all these years.

The first thing that comes to my mind is to thank all the people who I feel were instrumental in shaping my career. The list can go on only to suggest that I was a mere representative of the belief of the people.

Fourteen years of cricket have passed by, but the desire to play will always remain as fresh as it was at the beginning of my career. I am sure the desire will continue to persist all my life.

Time had come where I had to choose between my desires and the harsh realities of life. Quitting cricket will remain as my hardest decision so far.

Cricket as a profession is an intense career. The mind is always preoccupied whereas the body relentlessly strives for perfection. Cricket being a great leveller has always taught us new lessons.

If the ignominy of defeat, the criticism, the sense of loss of pride, the anxieties of the future and the state of rejection are some of the dreaded facets of cricket, the adulation, the heart-felt appreciation, the hero-worshipping and exposures are some of its better attributes.

On the whole, be it success or failure there was some thing new and more to learn from this great game.

My best times of cricket came in the last few years. My provisional exit from the one-day games every now and then was with a purpose.

As my body would not take the load with the amount of cricket we played, it was imperative that we had few international quality bowlers sharing the responsibilities.

A rotation system would have been the best thing to happen but somehow that idea never appealed to the selectors. With very little choice I had to stay away from one-dayers to stay fit to contribute in a very objective manner.

As my earlier retirement announcement appeared to be little premature under the circumstances, it was the belief of my teammates in me that made me reconsider the decision.

Though playing in the World Cup final was the biggest moment in life, but the way we progressed to the final would be the most memorable one. I had bench-marked the World Cup as my final destination, but the defeat in the final brought the Australian series back into my focus.

I did realise that it required nothing less than my peak fitness to be a contributor on this tough tour. The right knee which had been a weak-link of all my joints, would not heed to any amount of rehabilitation and strengthening exercise.

After more than a decade of international cricket, only a fit body can have a fit mind. It was impossible to think of playing while having reservations and fears about my own fitness.

I, always practiced, appreciated and respected people with high team values, hence my decision of retiring was important.

Only had I got this knee set right in time, it would have been a great pleasure to be a part of the Indian team fighting for honours Down Under.

Although quitting the game was emotionally hard, there is a sense of achievement in conquering my desires. I hope this decision of retirement will help me build a new career. Not to forget my real life retirement is as far as 26 years away.

I have enjoyed the game to the fullest without any regrets. Yes, I have succeeded at times and have not at times, but today I can touch my heart and say that I have played it hard and gave it all.

I express my sense of gratitude to one and all for making this wonderful career of mine possible. I owe it to everyone.