Perseverance Pays Off For Resolute Sardar

It is the never-say-die spirit that has seen Harbhajan through the dark days. 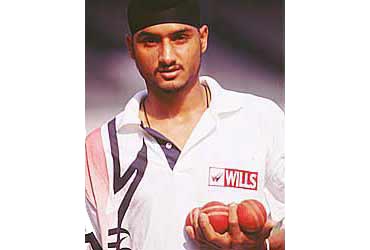 A greenhorn, Harbhajan has seen crests and troughs in his career to match that of a veteran's. From impressing skipper Anil Kumble in a club match at Chennai as a 17-year-old, his elevation to the national side in 1998 as a relatively unknown 18-year-old, being sidelined for "chucking", expulsion from the National Cricket Academy for indiscipline, to being the first Indian to claim a hattrick in Test cricket, Harbhajan has been through heady moments and disappointments.

But the setbacks only brought forth the fighter in the sardar and steeled the lanky offspinner's resolve as he battled his way into the national squad for the Australian tour - a side against whom he made his debut during the 1997-98 season.

When Harbhajan, barely into his early teens, began hitting the single stump regularly under the watchful eyes of coach Devender Arora in Jalandhar, few could have visualised the whirlwind chain of events that were to unfold in the cricketer's still nascent career. During a Delhi-Tamil Nadu Ranji Trophy match in late 1997 in Chennai, a local reporter in a chat with a scribe from New Delhi said "You guys have a killer in your backyard. He has a deadly loop." Met with a blank look, the reporter named Harbhajan, the lad having run amok when Punjab took on TN. Barring the odd reference, Harbhajan was just another faceless name trying to make a mark at the national level.

His selection for the 1998 home series against the Australians raised eyebrows. His performance in the Bangalore Test (the scalps of Darren Lehmann and Damien Martyn) smothered talk of his selection, for whatever reasons, and placed him as a promising prospect. For Harbhajan success had come easily when compared to players, and more talented ones at that, some of whom spent their entire career waiting to don the India cap. From the simple surroundings of Jalandhar to the glitz and glamour of five star hotels, overseas tour, reporters hounding for interviews and fans craving for interviews, Harbhajan was transported into a new world. And the change struck a chord within the impressionable lad.

This bore testimony in the verbal spat with Ricky Ponting which resulted in a one-match suspension. After that it was a free fall. His arrogance (read "aggression") had Harbhajan lose friends rapidly and the player himself struggling to live up to expectations. But somewhere deep down he still managed to retain his old self. Or how would one explain the act of walking into the premises of a national daily to thank the reporter for a "favourable" piece. After a few words and a firm handshake, "Bhajju" strode out, watched by the open-mouthed staff, and moved off in a waiting autorickshaw. It was the absence of guidance which had the youngster meddling up his priorities.

Close on the heels of the Sharjah incident came the shattering blow of Harbhajan being reported for chucking. Several cricketing pundits wrote off Harbhajan for dead. True he had to miss out on on-field action but the Punjab offspinner made most of the corrective stint with former England spinner Fred Titmus. It was a matter of time before Harbhajan was again attracting the attention of the selectors, this time not only as a offspinner but also as a useful lower order bat.

But attitude continued to cause him problems - the expulsion from the National Cricket Academy in July last on grounds of indiscipline - bore testimony to this. The death of his father, Sardev Singh, a month later saddled him with the additional responsibility of taking care of his mother and two unmarried sisters. Taking it as a "signal from the Almighty" to change, Harbhajan took it in his stride and strove on in pursuance of his "sole ambition" - playing for India. Employed with the Indian Airlines, he travelled from Jalandhar to Amritsar and returned for training sessions under Devender Arora. It is this never-say-die spirit that has seen Harbhajan through the dark days. Times when barring his unflinching faith in God and the support of a handful of well wishers he had little to fall back on.

Notwithstanding the flip side to Harbhajan's fledgling career, he is a talent who needs to be nurtured and persisted with. Legendary spinner E.A.S. Prasanna remarked: "I was proud of his hattrick." Mother Avtar Kaur's instincts also say so. "I know little about the game, but I always had hope that my son will do something great in the game," she said. Is the BCCI listening?

'Consistency At The Top Is A Must'