The 1896 Bombay Plague: Lessons In What Not To Do

In a country ailed by severe economic inequalities, we are reminded time and again that state policy and legislations are always made in hasty ignorance of the harsh effects that would befall the country’s poor and downtrodden. 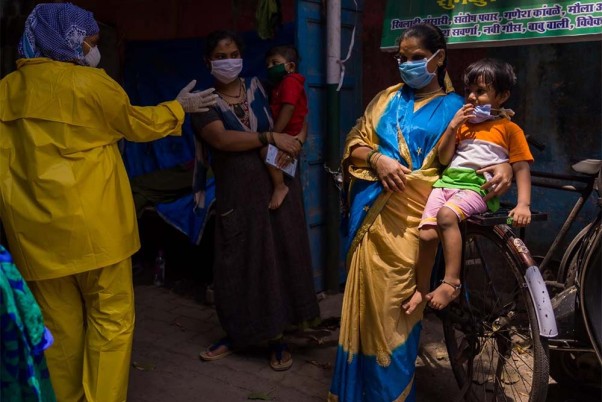 People wait to give their samples to medical staff at Shiv Shakti Nagar slum in Colaba during lockdown to control the spread of the new coronavirus, in Mumbai.
Photo by Apoorva Salkade/Outlook
Anirban Chanda, Sahil Bansal 2020-04-09T15:30:46+05:30 The 1896 Bombay Plague: Lessons In What Not To Do

On the March 24, the Indian Prime Minister, in what seemed like a knee-jerk reaction, announced a 21-day national curfew in response to the COVID-19 virus pandemic. To legally sanction its decision, the Government adopted a 123-year old colonial legislation, namely the ‘Epidemic Diseases Act, 1897’ that our former colonial masters’ had hastily drafted to tackle the bubonic ‘Plague’ that engulfed the Bombay Presidency in the late 1890’s. This unusual administrative adoption of a 19th century legislation has drawn criticism from all spectrums of the society. One perhaps cannot question the veracity of such concerns - raised at this experimental feat of using a piece of cobweb jurisprudence which hasn’t seen the light of the day for more than a century.

It might be interesting to note that, back in the day, the strict measures imposed through such colonial laws were largely unsuccessful in controlling the Plague in 1896. The iron hand of the British officers only added fuel to the growing public unrest. As the plague drew to an end, the colonial administration realised, after several failed attempts at imposing draconian measures on the general public, that, in times of severe crisis government policies and legislations cannot afford to exclude, ignore and be insensitive to the emotions and social realities of the ordinary masses.

Over a century later, India is faced with another world health crisis. To the disappointment of many, it seems that, while the nature of the Indian Government has changed, the myopic approach of our law and policy makers has remained largely intact. In a country ailed by severe economic inequalities, we are reminded time and again that state policy and legislations are always made in hasty ignorance of the harsh effects that would befall the country’s poor and downtrodden. Therefore, one is perhaps compelled to assert that the Indian state has not learned from the mistakes of its colonial predecessors.

Health policies as a tool to colonize society and land

In 1763-64 the colonial government had formed the Indian Medical Service (IMS) to regulate and remedy the health concerns that the country faced in the late eighteenth century. India’s public health policy during this period was primarily concerned with protecting the British officials against diseases that they might contract during their stay in India.

Nicholas Evans, a research fellow in the Department of Anthropology at the London School of Economics, argues that the chaos caused during the Bombay Plague cannot alone be blamed on the poor state of urban sanitary conditions and unhygienic breeding of rodents and vectors. In fact, a great ordeal of the tragic epidemic can be attributed to the misgovernance of the public health authorities who attempted to strengthen their hold over the society by enforcing whimsical health measures in the name of public safety.

The eminent British historian David Arnold notes in his book Colonizing the Body: State Medicine and Epidemic Disease in Nineteenth-Century India (1993) that, the Epidemic Diseases Act of 1897 (the Act), was a product of the colonizing efforts of the IMS officials, which gave them a freehand in exercising their whims. Arnold’s statement strongly resonates with the observations that Michel Foucault, the French social theorist, had made during his lectures on social medicine, delivered in 1974 at the State University of Rio de Janeiro, Brazil.

Michel Foucault propounded that, under colonial rule, medicine and health policies too had become a tool to colonize the society and land, and not just the body. Similarly, the British colonial government had put in place medical authorities which also behaved like social authorities while taking decisions with regards to the functioning of towns, districts, etc.

Notes from the Bombay Plague:

It was on 26th September 1896 that the Bombay Gazette signalled the presence of “genuine cases” of bubonic plague in Bombay. The Plague claiming lives of thousands of people in Bombay itself, made its way to United Provinces and Punjab at the turn of twentieth century. There were 20,788 deaths due to Plague reported in Bombay alone, in 1903.

The alarmingly unhealthy state of the city of Bombay, as recorded by the British historian, Sir Sidney James Mark Low, was one of the reasons why the British brought plague further spread like a wildfire-

But it wasn’t just the death toll that created a dramatic ruckus around plague. The steps taken by the colonial government in response to the spread of the epidemic were equally drastic. Natasha Sarkar, writing for the Journal of Indian History Congress (2001), records that the Health Committee invited severe criticism on its quarantine policy. For instance, the Committee did not issue notices of quarantined areas in advance. This caused great inconvenience to the ordinary people who regularly commuted to the Bombay Presidency for work. Moreover, Europeans and first-class passengers were exempted from quarantine. Newspapers of the city heavily criticised such an exemption and questioned whether the Europeans were immune to plague!

This British centrist attitude, as reflected in the Indian public health policy, was persistent for the greater part of the early 20th century, at a time when the bubonic plague had already claimed thousands of lives. Amongst the class of special groups were the Indian elites, who were of key importance to the British for the maintenance of their colonial rule, and therefore, the colonial authorities never interfered with the free movement and freedom of trade of the Indian upper class. At the height of the Plague, the wealthy business class was the first to leave Bombay for their native towns while the government made several attempts to confine the working class to the Bombay to ensure that the infection would not spread to rural areas.

It was only after the international actors started placing embargoes on trading with India because of the callous attitude of the British towards the spread of plague, that the colonial government passed the Epidemic Diseases Act of 1897, in addition to adopting measures like quarantine. The excerpt below was published in the British Medical Journal on 20th February 1897. It lists out some of the measures imposed by the colonial government under the Act in Bombay:

“Under Epidemic Diseases Act Government have empowered Municipal Commissioner, of his own authority, and without reference to the magistrate, (1) To prohibit the use of Dwellings unfit for habitation; … (3) to require vacation of buildings and premises for cleansing and disinfecting; … (6) to cut off water connections … for strict medical inspection of all passengers”

The medical teams put together by the colonial government started the disinfection ferociously without any check in place to curb abuse of power. The teams barged into the houses of ordinary people and took into custody every other person who displayed the slightest symptoms of ill health. These individuals were shifted to the public hospitals. These hospitals, too, became the destinations of utmost horror as was recorded in a report written by J.K. Condon where he states that “the people not only regarded hospital treatment with detestation, but reports were freely circulated that the authorities merely took them there to make a speedy end of them.”

This “frenzied zeal”, as Indian historian Rajnarayan Chandavarkar calls it, of the colonial government towards containment of the Plague, received a massive panic-generated pushback from the Indian population and played a contributory role in worsening the situation. There were various socio-economic reasons that led to the resistance of such control measures. Natasha Sarkar (cited above) writes that for the poor, hospitalisation meant a loss of wages. Without any source of income, these hapless individuals found it extremely difficult to afford their daily meals and living in the urban areas from where they were not allowed to leave.

The merchants too, were resentful of the restrictions that were imposed upon their freedom of movement by searches as well as destruction of their grain, cloth and other goods. Myron Echenberg notes in his book Plague Ports(1894-1901): “Textile mill owners hated the damage to their fabrics caused by using steam to sterilize their goods.”

The situation worsened over time. A riot broke out in Bombay in March of 1898 in response to the control measures implemented by the colonial government under the Epidemic Diseases Act (1897) which imperilled the life of the control team officers. This led the British to reconsider the control measures and make them less invasive.

The colonial government eventually realised that draconian measures would only increase popular unrest and invite resistance. This led to a noticeable shift in the health policies which emphasised better hygiene and improved sanitary practices along with a more regulated maintenance of the environment and cityscape. In the aftermath of the Plague, the colonial government established various bodies that were entrusted with the responsibility of restructuring the city in order to create cleaner localities. In the next few months, the number of reported cases started to decline. By the end of 1898, Bombay had successfully made it through the epidemic. The Presidency gradually recovered to its vibrant normalcy.

A lesson not learned:

The public message during the Bombay plague was clear and unambiguous. If the colonial government tried enforcing measures without the co-operation and consent of the people, it would trigger public unrest. It was of paramount importance that the government acted with sympathy and understanding of public needs.

In the present day, it is crucial that the Indian government learns from the historical mistakes that its colonial predecessors had committed. The present authorities must act with patience and sagacity. The ongoing crisis can only be won with the active co-operation of the masses and by taking community leaders into confidence.

In times of such global crisis, as Israeli historian Yuval Harari has recently remarked - “Many short term emergency measures will become a fixture of life. That is the nature of emergencies. They fast forward historical processes” - in this historical process of mankind, all individuals irrespective of their gender, caste, race and economic background make the same journey, together. In this journey, the government cannot leave behind any group, especially the backward sections of our society.