Labour law relaxations will lead to the creation of low-wage employment that will slow the process of economic revival in the coming months. 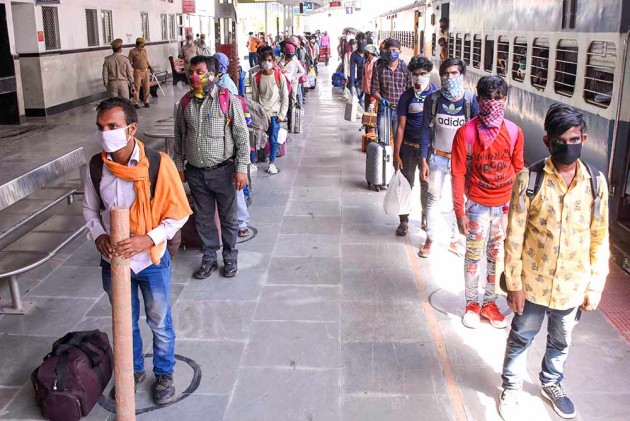 The complete lockdown to combat the Covid-19 pandemic in India has badly impacted economic and industrial activities across the country. Millions of workers have lost their livelihood and all the three sectors of the economy have been crippled for almost two months. Meanwhile, the state governments of Uttar Pradesh and Madhya Pradesh either scrapped or relaxed most of their labour laws on the pretext of attracting private capital in their states that will supposedly improve revenue earnings, spur economic growth and create employment.

While the UP government exempted businesses from having to comply with all key labour laws except three for the next three years, the MP government too made amendments in major acts, including the Industrial Dispute Act and Factories Act for 1000 days.

The neo-liberal discourse on labour regulation, in India and elsewhere, has long been arguing in favour of labour market flexibility and doing away with restrictive labour laws saying that they hinder investment and employment. As per this view, restrictions faced by employers in hiring and firing, use of contractual labour, pressure from trade unions etc. have led to poor growth in employment and an overall disappointing industrial performance in the country. Employers in an open and competitive economy prefer flexible labour strategies where they have the freedom to hire and fire workers without any interference from the government or labour unions.

A look at certain indicators or facts, however, shows that such an argument does not hold much ground as many of the important labour laws have already been amended in favour of employers or their compliance is extremely poor. This is visible in rising informality in India’s manufacturing sector. The share of contract workers in India’s organized manufacturing sector has increased from 15.59 per cent in 2000-01 to 27.94 per cent in 2015-16. On the other hand, the share of directly hired workers has declined from 61.26 per cent to 50.44 per cent during the same period. Increase in the proportion of contract workers has enabled the employers to restrain the bargaining power of directly hired workers and thus depress their wages. The data shows that the wages of directly hired workers have remained stagnant in real terms between 2000-01 and 2015-16, while the wages of contract workers have increased at a meagre rate of 1.92 per cent per annum. This has led to bludgeoning profits for employers at the cost of wages of workers.

Moreover, the percentage of firms which report no contract workers in their workforce has declined from about 80 per cent in 2000-01 to 67 per cent in 2013-14. The rise in the hiring of contract labour has taken place across units of different sizes, and it has been equally high in the units operating with 100 or more workers. In these units, the share of contract workers has increased from 14.81 per cent to 24.68 per cent between 2000-01 and 2013-14. This clearly shows that employers enjoyed flexibility in the production processes despite the presence of the Industrial Dispute Act (IDA) and vastly disregarded Contract Labour And Regulation Act (CLRA).

Some of the most important laws for the protection of labour rights suffer from very poor compliance. For instance, factory inspections hardly take place due to the dearth of essential manpower at the disposal of labour welfare departments. The connivance of labour law-enforcing officials with employers in the violations of labour laws in exchange for their ‘cuts’ is very frequently reported across regions. The process of grievance redressal due to the shortage of essential manpower is so lengthy and expensive that workers hardly think about accessing the government machinery for getting their due claims or securing their rights. Data from the Indian Labour Year Book suggests that the inspection rate in factories has seen a sharp decline from around 63 per cent in 1986 to a mere 17.8 per cent in 2008.

The nexus of capital and state has already decimated the trade union movements in recent years. This is visible in the declining memberships of trade unions, and a steep fall in the number of strikes and lockouts over the years. The waning power of these unions has enabled the employers to rule the roost in the matters pertaining to employment contracts, fixing wages, and hiring and firing of labour with workers having minimal say in these issues. The pro-employer stance of the judiciary, as witnessed in several landmark judgements in the past years has also weakened the position of labour vis-à-vis their employers.

The above indicators suffice to prove that employers in India are already enjoying a high degree of flexibility. Any argument which claims that labour laws in India are rigid and impeding economic growth and employment generation is simply exaggerated. The Indian economy is suffering from low consumption demand in recent times and there is a need to boost domestic demand by ensuring disposable income in the hands of people. However, labour law relaxations, as we have seen in the past, will lead to the creation of low-wage employment that will slow the process of economic revival in the coming months.

The corporate class is already well pampered and is availing several concessions. But even if the state governments are willing to woo capitalists to attract investments, they can think about other incentives like providing tax holidays for a stipulated time period.

(The author is a member of the Council for Social Development, New Delhi. Views Expressed are personal.)