"First we chew tobacco and then spit on our Bharat Maa, then, do we have the right to chant Vande Mataram?" he asked 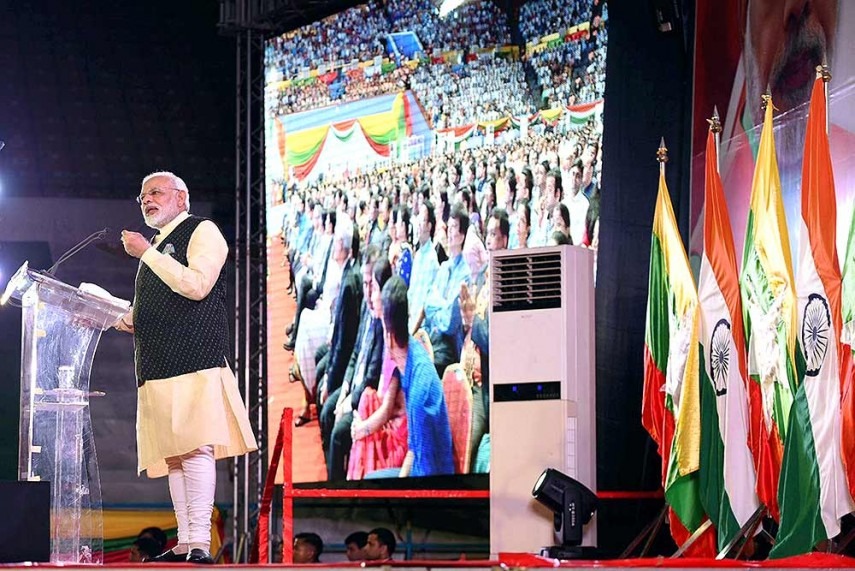 Addressing students on the occasion of the 125th anniversary of Swami Vivekananda's famous address at World Parliament of Religions in Chicago, Prime Minister Narendra Modi on Monday again stressed on the need for all Indian citizens to join in the campaign for a "Clean India", saying citizens should think fifty times and ask themselves whether they have the right to chant 'Vande Mataram' when they can't keep the country clean or abuse the land on which they live.

"First we chew tobacco and then spit on our Bharat Maa, then, do we have the right to chant Vande Mataram?" asked Prime Minister Modi to the youth attending the event.

Prime Minister Modi addressing the issue of cleanliness in India said that do we have the right to shout 'Vande Mataram' if we throw garbage inside our own nation.

"If anybody has the right over this nation, then they are those who work for the cleanliness of the nation, and only they have the right to call Bharat Maa theirs," said Prime Minister Modi.'

He further said that whether we clean this nation or not, no one has the right to dirty it.

"First make a toilet and then talk about the prayer room," Prime Minister Modi said addressing the youth.

The speech was listened to by university students via video conference across the nation. Talking about the day, Prime Minister Modi said that today 9/11 became widely spoken about after 2001, but there was another 9/11 of 1893 which the nation remembers.

"Just with a few words, a youngster from India won over the world and showed the world the power of oneness," Prime Minister Modi said.

He further said that Swami Vivekananda raised his voice against the social evils that has entered the India society, and added, "Only rituals will not connect an individual to divinity. Swami Vivekananda had said 'Jan Seva is Prabhu Seva', meaning serving the people is like serving the God."

Prime Minister also said that more than being in search of a Guru, Swami Vivekananda was in search of the truth.

"Swami Vivekananda did not believe in sermonising. His ideas and idealism paved way for an institutional framework through Ramakrishna Mission," Prime Minister Modi conferred.

Ramakrishna Mission is an Indian religious organization which forms the core of a worldwide spiritual movement known as the Ramakrishna Movement or the Vedanta Movement.

The mission is named after and inspired by the Indian saint Ramakrishna Paramahamsa and founded by Swami Vivekananda on 1 May 1897. The mission is located in Kolkata and subscribes to the ancient Hindu philosophy of Vedanta and aims at the harmony of religions and promoting peace and equality for all humanity.

On the 16th anniversary of the dreadful 9/11 attacks by al-Qaeda's founder and the mastermind of the attacks, Prime Minister Modi said, "There is one 9/11 where Vivekananda worked hard to flourish the country, on other hand we saw the 21st century 9/11 that destroyed humanity."

Hailing legendary poet, literate and India's first Noble prize winner Rabindranath Tagore, Prime Minister Modi said that there were two times when India's name emerged all over the nation, "First when Rabindranath Tagore won the Nobel Prize and second was when Vivekananda gave his 9/11 speech in Chicago," also emphasizing that both of them hailed from Bengal.

As supporters present started shouting 'Vande Mataram' Prime Minister Modi said that as he was listening to the youth chanting the words he got "goosebumps" all over.

"The value of patriotism fills my heart. But do we have the right to say Vande Mataram?" asked Prime Minister Narendra Modi.

He went on to say that those who chant Vande Mataram go on to throw litter and garbage on the roads.

"Those who clean the roads have the first right in our country," Prime Minister Modi said.

Stressing on cleanliness in universities during elections, Prime Minister Modi said that student organisations, while campaigning for university elections should give more importance to cleanliness.

"There is no better place for creativity and innovation than university campuses," said Prime Minister Modi.

Prime Minister Modi also said that people in the country should be job-creators and not job-seekers.

Trying to motivate the youths, Prime Minister asked the students to stop being afraid of failures.

He said, "No one in this world has succeeded without failures. Both knowledge and skills are equally important."

He also added that India is standing at the world's attention due to the power of the people, "India is changing, India's standing at the global stage is rising and this is due to Jan Shakt."

Addressing the thousands of youth watching him, Prime Minister Narendra Modi, said that there is no life without creativity.

"Let our creativity also strengthen our nation and fulfill the aspirations of our people," he said, adding that "Follow the rule and India will rule."

"While some may be opposed to it, I am not. But does a college in Haryana ever thinks about celebrating Tamil Day in college?" asked Prime Minister Narendra Modi.

He also said that there is no better place for creativity and innovation than university campuses and further added that celebrating such days in college universities will lead to formation of United India.

Swami Vivekanada, spoke about science in his address at Parliament on Religion in Chicago on 11 September, 1893, he said:

"Science is nothing but the finding of unity. As soon as science would reach perfect unity, it would stop from further progress, because it would reach the goal. Thus chemistry could not progress farther when it would discover one element out of which all others could be made. Physics would stop when it would be able to fulfill its services in discovering one energy of which all the others are hut manifestations, and the science of religion become perfect when it would discover Him who is the one life in a universe of death, Him who is the constant basis of an ever-changing world, One who is the only Soul of which all souls are but delusive manifestations. Thus is it, through multiplicity and duality, that the ultimate unity is reached. Religion can go no farther. This is the goal of all science.

All science is bound to come to this conclusion in the long run. Manifestation, and not creation, is the word of science today; and the Hindu is only glad that what he has been cherishing in his bosom for ages is going to be taught in more forcible language and with further light from the latest conclusions of science."

The speech was celebrated all over the world and hence Prime Minister Narendra Modi was addressing the youth on the same to mark its 125th anniversary.

Earlier West Bengal Chief Minister Mamata Banerjee tweeted about the same and said, "Our heartfelt homage to Swami Vivekananda on the anniversary of his historic address to the Parliament of Religions in Chicago in 1893."