"Modi Has His Work To Do, I Have Mine"

The PM's younger brother, who is protesting against the government, on his priorities. 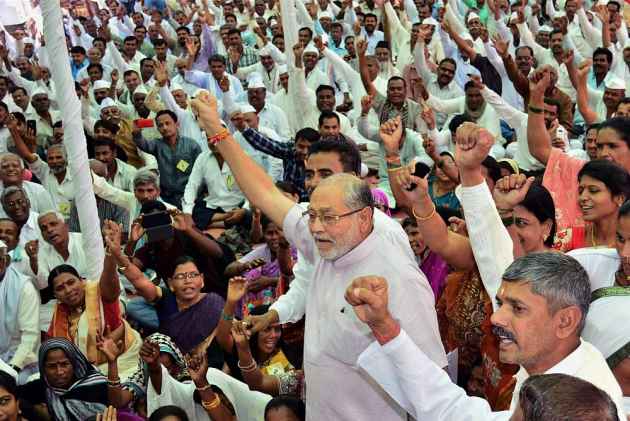 Prahlad Modi is the younger brother of Prime Minister Narendra Modi. He is a fair price shop owner in Gujarat and is the vice president of All India Fair Price Shop Federation. Ironically when his brother has been riding high following the election victory last year, Modi junior has been holding protests, first in Mumbai and then in Delhi, against what he terms is the BJP government's lack of will to solve their problems. He spoke to Mihir Srivastava.

What brings you to Delhi?

I was here to articulate demands of our sanghathan. There are many issues. The government plans to introduce biometric system in the Public Distribution System (PDS) to end corruption. This is not good for fair price shop owners like us. We want the government to formulate policy in consultations with us.

That your brother is the prime minister, does it make you hopeful that your demands will be met?

Let me tell you clearly. I was here (Delhi's Jantar Mantar to protest) thrice in 2013 with similar demands. Now there is a new government. We have come here to raise the issue again.

What is the issue? Just because Narandra Bhai is my brother, I cease to be a common citizen of this country? Since my brother is the Prime Minister have I lost the right to protest and to do sangharsh for our demands? I want to ask these questions to those who portray me coming to Delhi and participating in demonstration by our sanghathan as some family feud?

Both the brothers have leadership qualities and zest to work for issues that are not confined to their respective family interests.

Let there be no confusion. I am a simple trader. I have a fair price shop. I was here to fight for the rights of fair-price shop owners. Our parents have taught us to fight for our rights and raise voice against injustice.

Do you agree with your brother's politics?

I will again say that I am small trader. I have to take care of my shop and my family. That is my life. I have no interest in politics, generally, and that of my brother's political ideas. Though, I am aware that national media has been critical of him in last so many years.

Did you get in touch with your brother since you were visiting the city is he resides?

He was the chief minister of Gujarat of 13 years, met him only thrice. Twice on behalf of All India Fair Price Shop Federation. Once he had invited me. He has his work to do, I have mine. He has his own priorities, I have my own. I don't want to bother my brother by trying to contact or meet him.

Is your brother a family man?

That you will have to ask him. I am a family man, that much I can tell you. I have nothing to say about him.