I call it media circus because that's what I think this morning's so-called encounter killing of two young people referred to as "terrorists" in L-18 Batla House, Jamia Nagar, by the Delhi police really is, like many more such incidents. 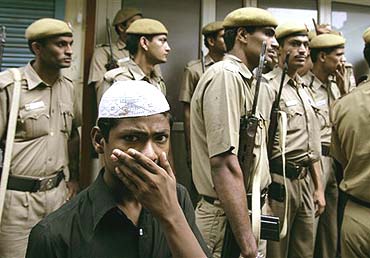 I have titled this "media circus", although I am actually referring to this morning's so-called encounter killing of two young people referred to as "terrorists" in L-18 Batla House, Jamia Nagar, by the Delhi police. I call it media circus because that's what I think it really is, like many more such incidents.

The incident happened in my neigbourhood, about 150 meters from my house. So I have the opportunity to see how things are turning up. I had gone out of the area for some work while the incident was taking place around 11 am, but found it impossible to reach back home 2 hours later, because the road for about 1 and a half kilometer (on both sides) was completely blocked, not by the police vehicles, but by the parked OB vans of the countless TV channels, some of which I had never heard of before. Each of these vehicles had its generators on, and thick video cables jetting out of them for several meters to the other end where the cameraperson and the excited reporters were shouting how two terrorists had been killed in the fierce encounter.

Most local people were surprised at the speed with which the TV crews arrived here and in such large number. Apparently, the Delhi Police had already told a section of the press they were going for a raid in Batla House, based on the suspect Abu Bashar's tip-off (I heard this from a anchor on a TV channel, although Police chief Dadwal later denied any link with Abu Bashar), but they didn't obviously say it was going to be an encounter. It's strange that the local residents got to know about the incident only after the two people had been killed – many in fact learnt it from the Aaj-tak channel. They claim they heard only the police firing and no gunshots from inside the flat, which the police claim have injured two of their constables.

Most of you watching news TV in your homes may have already heard the cacophony of the TV reporters, each trying to be shriller than the other to prove that the local members of the Indian Mujahideen had been killed. They now seem to have memorized their lines on this issue well, since they have to repeat the same thing again and again. The graphics, animated logos, crawling tickers, and dramatic music/soundtrack to go with such coverage are always ready in the cans to be used at short notice. A cameraman running towards Batla House was nibbling at a burger while he held on to a camera in his other hand. I saw two members of a TV crew outside the Holy Family Hospital (where the injured policemen had been taken) fiercely fight about which camera angle would look best for a sound byte. Everything looked as if planned and part of the usual business. The cops were happily allowing the media to climb any wall to get the best shot while they beat the local rickshawpullers to leave the roads clean. The message has got across loud and clear: we told you – Batla House is a haven of terrorists.

But many things sound fishy. I've been hearing a lot of angry conversations in the neighborhood: people are asking that if the police had only planned a simple raid (which they did 2 days ago in Zakir Nagar and Abul Fazl Enclave too), why did they have to bring battalions of police and encounter specialists with AK-56 and other deadly looking guns (that I myself saw) in advance? And why was the media called in even before the residents were told? Of course the fact the this happens in the month of Ramzan, on a Friday, and near a large mosque where people were going to gather in large numbers later for prayers, sounds just too predictable and clichéd for anyone's imagination. Most local residents feel that this was a stage-managed encounter just like so many others that have taken place in the past. However, with the news about the death of a police inspector, this claim is less likely to be taken seriously. I didn't find a single local resident who is not fed up with this oft-repeated image of Jamia Nagar as harbouring terrorists. But none of the channels I saw aired the public angst against their portrayal.

To be honest, one shouldn't deny that the Batla House area does have some criminal and anti-social elements, just as Darya Ganj or Shahadra or Govindpuri would have. But most local residents believe that for Jamia to become a haven of such criminal elements, the local police and land-mafia are equally responsible. Jamia area is one of the rare localities of Delhi where the rule of law doesn't apply in most spheres. The land mafia openly indulges in illegal construction; no rules of traffic apply here, the condition of civic amenities is abysmal. Illegal shops, factories (many with child labour) and businesses operate here actively with police connivance. The local politicians (MLA, councilors) are actually part of the problem rather than the solution. There is a full-scale illegal ISBT (bus stand) running in Batla House's backyard to bring hundreds of migrants everyday from small towns of UP (you can see the police openly accepting bribe from its operators any day).

There is no question of sealing whatever the heck business you may run here, and most places stink with heaps of garbage everywhere. There are no RWAs or citizen's initiatives to discuss the problems. It is truly a manufactured ghetto of Delhi – why don't all these problems happen in Lajpat Nagar or Kalkaji? I am positive that the authorities are aware that criminals (or what they call terrorists) exist here. But they deliberately allow them to thrive here – never to be touched in the normal/peaceful times – and save them for the right time. It is as if Batla House is a laboratory or breeding ground where things are allowed to grow by providing all the required ingredients and safety. The fruits are plucked only when they are ripe (or required). So today, they simply came to gather the fruit they had sown, and made a big exhibition of it by calling the media. The local people, frightened that the next encounter may happen in their house, simply
squirm and hide in their personal ghettos.

In all this, a big responsibility lies with the media, and I am yet to come across bold and honest reporters who are ready to go beyond the obvious and investigate the truth – not simply repeat what is told to them by the authorities or their channel bosses.

'We Have Lost Our Best Man'