The tag of World Cup finalists has rarely been so ill-deserved. 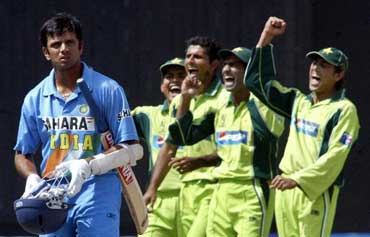 Clearly India's one-day cricket has gone to pieces. The tag of World Cup finalists has rarely been so ill-deserved. Now they have players who are playing only for themselves. There is so much uncertainty that Pathans, Gangulys, Harbhajans, Kumbles and Agarkars all look to be emerging from a revolving door.

India will have to start from the scratch. They have to be honest and ask themselves if they can afford selfish players. Such men might survive to play the next match but the Indian team would not move an inch forward. By now, it is such a bedraggled unit that even form batsmen are losing their plots.

Virender Sehwag is now trying to play a mixed game of attack and defence. It would never carry him forward for he doesn't have the technique of a defensive batsman. In Pakistan last year, as well as in the early part of this tour, he was smashing hits in the cover-to-third man region. Now he was trying to play grounded shots. Consequently, with rolled down wrists the catches are going into the hands of fielders.

The second in-form batsman Rahul Dravid too showed the pressure. There was no reason for him to go for that run. A premier batsman should never open himself to a situation where a decision on his run-out is being judged by the third umpire. It implies that a decision is too close for comfort. His was the most valuable wicket and he risked a perfectly avoidable situation. Yuvraj Singh too was an unnecessary waste. It reflected the team's state of mind.

Ashish Nehra, after that splendid first-up delivery to Shahid Afridi bowled a few freebies down the legside. This team's confidence is completely dried up. If a team, from being 2-0 up, goes on to lose the series, it means drastic measures can no longer be avoided.

Pakistan on the other hand were so sure of their combination and ability. If you trust the next man, automatically you perform a notch higher than your ability. It showed in the way Rana Naved-ul Hasan bowled. He is not superior to India's Nehras and Zaheers but he is now confident since he has had success against your batsmen.

Sachin Tendulkar, after that carefree hundred in Ahmedabad, is back to his cautious ways. It is never going to help the team and sooner than later, he would be open to scrutiny by the public.

Pakistan's batting worked so well in tandem despite two atrocious umpiring decisions. I just couldn't believe when Yousuf Youhana was given out. I really thought the umpire had pressed the wrong button. They batted with confidence and it was this ingredient which was reflected in the two run-outs they managed in the field.

On hindsight, Pakistan's saving of the Mohali Test was the defining moment of the sereies. Two irregular batsmen showed the rest if they could do it in a losing cause, the others too could pull their weight in the days ahead. As the series progressed, Pakistan kept drawing confidence from that singular moment of defiance.

It is instructive for India to remember they couldn't beat a side which was without their star striker Shoaib Akhtar. The rest of the bowlers were not better than your Kumbles and Harbhajans, Balajis and Pathans. But by the end, the lapses of the rest proved too much to bear even for them.

Inzamam-ul Haq now goes back home with his stature enhanced. To overcome the deficit in the Tests and one-dayers, team bonding played a critical part.

India missed that selfless spirit in their ranks. Now they need to identify a pool of 20-30 cricketers and start finetuning a stuttering engine. They also need to rotate their men. It is the only way to stir a few settled men out of their slumber.

At Kotla, it was a return of that sickening feeling when a section of the crowd held up play. One felt frustrated and helpless: two Premiers in attendance, scores of celebrities and dignitaries, packed stands, a glorious finale all but accomplished. Then some stupid heads got into the act. They didn't appreciate the moment and let the whole of India down. If they were unhappy with the team, they chose the wrong way. Improve your team rather than bark up the wrong tree.