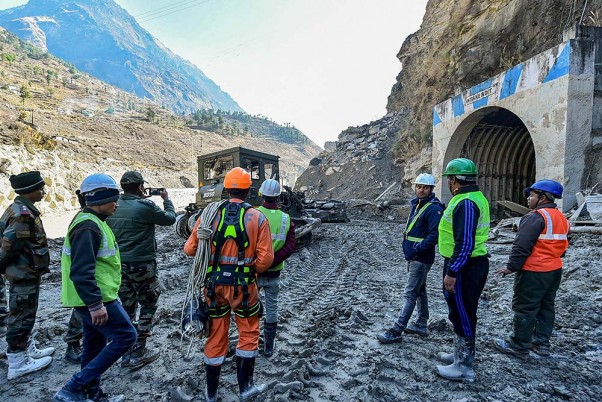 Following the search and rescue operations being intensified in the area, 12 more bodies have been recovered from the flash flood-ravaged hydel project sites in Tapovan and Raini of Uttarakhand's Chamoli district.

The toll in the calamity has now reached 50, while 154 people are still missing, shared officials.

The bodies have been kept at a temporary mortuary built in the Tapovan area, they added.

Five bodies were recovered from the intake adit tunnel of the NTPC's 520 MW Tapovan-Vishnugad project. These are the first bodies to be recovered from the site where muck-clearing and drilling operations have been underway on a war-footing since last Sunday.

Three others were recovered from Raini, where a 13.2 MW hydel project along the Rishiganga was destroyed in the calamity.

Two of the bodies have been identified. One hails from Narendra Nagar in Tehri district and another from Kalsi in Dehradun district, Chamoli District Magistrate Swati S Bhadauria said.

She said a helicopter has been kept ready at the site to provide medical help to survivors if any.

The NTPC's Tapovan-Vishnugad hydel project had suffered extensive damage in the flash flood, which also demolished the Rishiganga hydel project.

Rescue teams continued widening a hole into the Silt Flushing Tunnel at the project site in Tapovan where around 30 people are believed to be trapped.