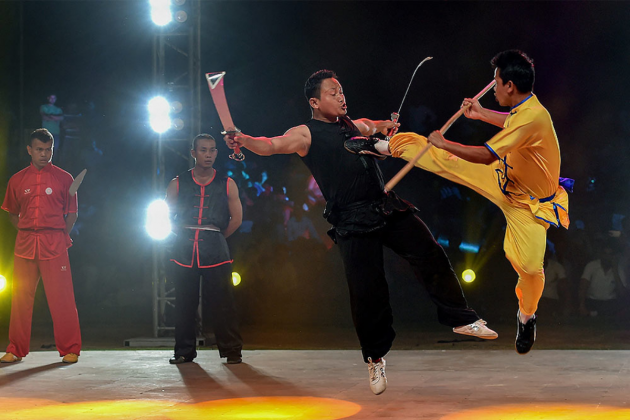 An Indian-origin man Ganesan Sandhirakasan, 33, living in Singapore has managed to win a top prize in a competition for migrant workers initiated by the country's government. To win the competition, Sandhirakasan who is a native of Tamil Nadu, performed a choreographed martial arts routine called Silambam. For his performance, Sandhirakasan took home the prize money of SGD 1,000 (USD 743 or Rs 55,000 approximately).

The ancient form of martial arts has been practised in India since the 4th century BCE. A video of the performance was uploaded to the video-sharing site TikTok where it received the highest number of views and likes among all the other contestants' videos, posted on the official account of SG 4 Migrant Workers,

The series was made for migrant workers in Singapore and the final episode was aired on Monday night.

The competition is part of the Tamil variety series Chill Pannu Maappi!, commissioned by the Ministry of Communication and Information and produced by Cosmic Ultima Pictures for migrant workers.

Migrant workers were invited to send in video submissions of their talents and the show received more than 600 entries, said executive producer of the show S.S. Vikneshwaran.

Sandhirakasan started practising martial arts at the age of 12 and won a silver medal for India at the first Silambam World Championship in 2010.

"(I decided to take part) after seeing the advertisement (for the competition) on the website. My workplace was closed during the COVID period," he said of the first talent competition held in Singapore.

"I wanted to use the time on something. Therefore, I choreographed (a demonstration of) the Indian martial art Silambam," the Channel New Asia quoted Ganesan as saying.

Sandhirakasan said he submitted his video with the intention of making the martial art form known to more people, and to encourage others to keep fit.

"It takes concentration, fitness, and practice to perform a continuous sequence of Silambam. Learners benefit from both physical, health and mental health," he added.

The second place in the competition went to Vignesh Sathish, whose video of him performing a traditional dance form known as the Karagattam in costume won him SGD 500 (USD 372).

The winner of the third position - with a prize money of SGD 300 (USD 223) - was Saran Raj, an assistant supervisor with a cleaning company who submitted a video of himself singing.

Sandhirakasan said he was “happy and excited” to win the first position. He plans to keep half of the prize money for his own use, and donate the other half to a foundation in his hometown in Mayiladuthurai in Tamil Nadu to provide at least 500 meals for the elderly.

Sandhirakasan said he hopes the money will help individuals who are facing “challenging times” due to the COVID-19 pandemic.

The reception for the show and the competition segment has been "pretty good" so far, Vikneshwaran said, adding that both migrant workers and Singaporeans enjoy the series.

"They seem to love the idea of being able to connect with familiar faces that they know from back home. They enjoy the dance, the songs, their favourite so far has been the stand-up comedy segment, which features some sensational comedians from Tamil Nadu," he said.

The competition saw submissions including those of singing, dancing, playing instruments, said Soffy Hariyanti, director of the Ministry's campaigns and production department.

There were also some unique entries featuring martial art forms and folk dances, she added.