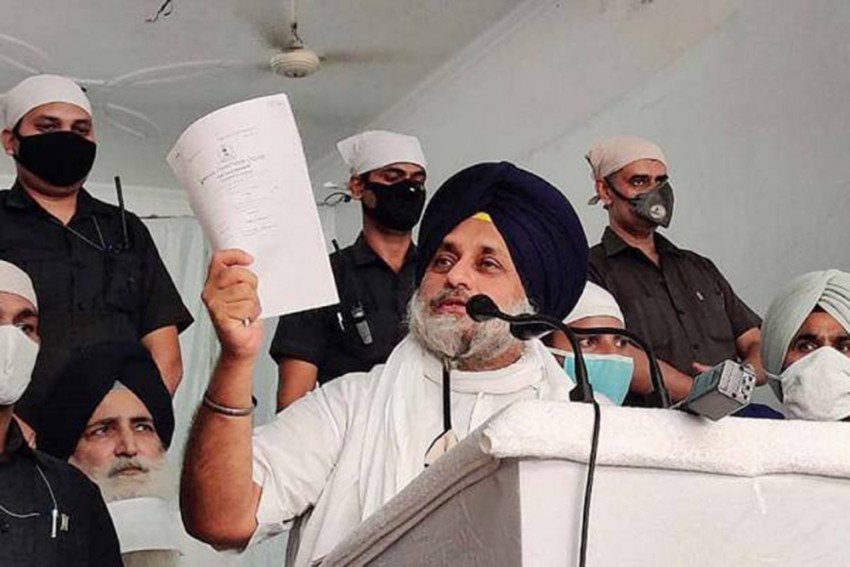 The Shiromani Akali Dal (SAD) on Tuesday labelled the Supreme Court order on staying the implementation of three new farm laws till further order as a "resounding moral defeat" for the central government.

The SAD described the composition of the committee formed by the Supreme Court to look into the farmers' grievances against the laws as "most unfortunate and unacceptable", according to a party statement.

Harcharan Bains, the principal advisor to the party president, said the committee passed a resolution, saying "the apex court order fully vindicates the stand and steps taken by the SAD prior to the passage of the anti-farmer bills".

"We had advocated then also that the passage of the bills be put off, a Select House Committee be formed and the consent of farmers be taken before introducing the bills in the House," he said, while pointing out that the SAD had walked out of the BJP-led NDA and party leader Harsimrat Kaur Badal had resigned as a Union minister over the farm laws.

It said the composition and character of the committee "fully exposed the anti-farmer nexus" between Punjab Chief Minister Amarinder Singh and the Centre.

The profile and background of the members of the committee clearly show that this was done at Singh's instance, the party alleged.

"How else would you find in the committee names such as that of a known supporter of the anti-farmer laws, B S Mann, a former Congress MP whose son was nominated to the PPSC by the chief minister," Bains said.

The Supreme Court stayed the implementation of the controversial farm laws till further orders on Tuesday and decided to set up a four-member committee to resolve the impasse between the Centre and the farmers' unions protesting at Delhi's borders over the legislations.