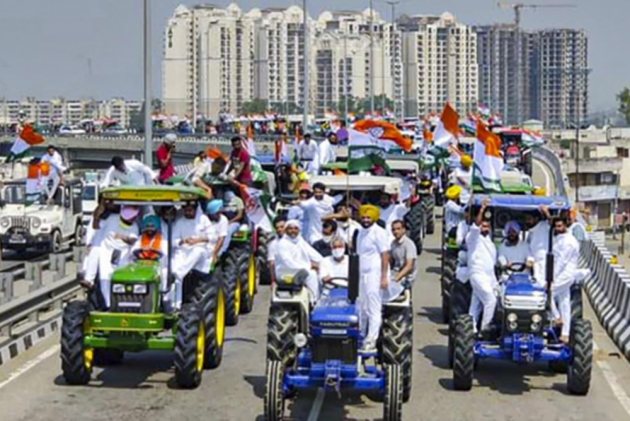 Vowing to scrap the new farm laws once the Congress returns to power at the Centre, Rahul Gandhi on Sunday alleged that the BJP-led government was acting at the behest of select corporates to "destroy” farmers.

Leading a tractor rally in Punjab against the farm legislations, the Congress leader launched a blistering attack on Prime Minister Narendra Modi and questioned the need for bringing in the new laws at the time of the coronavirus pandemic.

“Their target is to end the MSP and food procurement system. They know the day that happens, farmers of Punjab and Haryana will be finished,” he said.

“But the Congress will not allow this to happen, we stand firmly behind you. We will not back down an inch,” Gandhi said while addressing a gathering at Badni Kalan here before a tractor rally through the districts of Moga and Ludhiana.

The Congress, which is in power in Punjab, is holding tractor rallies from October 4 to October 6 across the state in protest against the Centre's new farm laws.

Gandhi alleged that the Modi government was “a puppet whose strings were in the hands of the Adanis and the Ambanis".

“I guarantee the day Congress government is formed (at the Centre), these three black laws would be scrapped and consigned to wastepaper basket,” he said.

The former Congress president said if the laws were meant for farmers, then why were they agitating against these new legislations, and referred to the Congress' opposition to the Land Acquisition Bill.

He said while the system needed reforms and change, there was no way the Congress would allow it to be destroyed.“I am not saying that there is no deficiency in this system. There is a need to reform the system, but it does not need to be destroyed.

“If you do so then there will not be anything for farmers' safety and they will have to directly talk to Ambani and Adani and farmers will be destroyed,” he said.

President Ram Nath Kovind has given assent to the Farmers' Produce Trade and Commerce (Promotion and Facilitation) Bill; Farmers' (Empowerment and Protection) Agreement of Price Assurance and Farm Services Bill; and Essential Commodities (Amendment) Bill, which were passed by the Parliament last month.

The government has maintained that the MSP system will remain and has accused the Congress and other opposition parties of misleading farmers.

Prime Minister Modi has alleged that those opposing the bills only want the “middlemen” to thrive, while his government is concerned about the interests of farmers who will now be able to get a better price for their produce.

It was merely "opposition for the sake of opposition", he had said on the protests against the new laws and claimed that these parties too had been in favour of such reforms but lacked the courage as their focus was only on elections.

Gandhi targeted Prime Minister Modi, accusing him of lying to the people and misleading the nation for the past six years to “serve” the interests of two to three large corporate houses.

“For six years, Narendra Modi has been speaking lies. When he brought demonetisation, he had then said black money will be curbed. When GST was implemented, it hit small shopkeepers, traders and the poor.

“When COVID-19 came, the debt of biggest corporates of the country was waived, their tax was waived. But no relief was given to poor and farmers, not a single rupee was given,” he alleged.

Referring to the Hathras case, where a dalit teenager died after being assaulted and allegedly gangraped, Gandhi claimed that while no action is being taken against the culprits, the victims are being targeted.

Gandhi and other party leaders including Priyanka Gandhi Vadra had on Saturday night met the victim's family in Hathras, Uttar Pradesh.

Later, Rahul Gandhi along with Punjab Chief Minister Amarinder Singh sat on a tractor which was driven by Punjab Congress chief Sunil Jakhar.

In his address, Chief Minister Amarinder Singh also pledged not to back out of the fight against the “black laws” till they are amended to give a written constitutional guarantee on MSP and continuation of FCI.

The verbal assurances of the BJP-led government could not be trusted, he said.

He also accused the Akalis of “selling off” the interests of the farmers as part of the Union Government.

Former minister Navjot Singh Sidhu, who had been at loggerheads with Chief Minister Amarinder Singh and had stayed away from all Congress activities ever since he resigned from the state cabinet last year, too addressed the gathering.