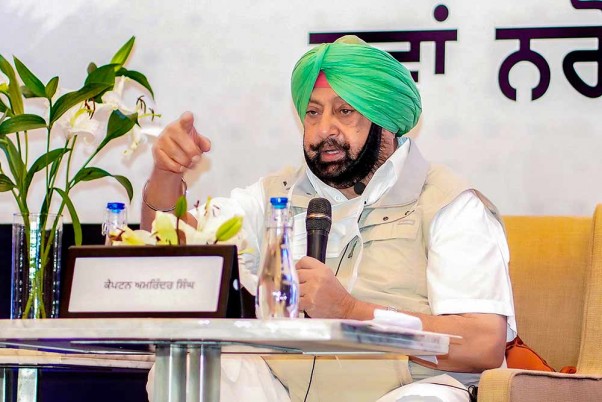 Punjab Chief Minister Amarinder Singh on Sunday launched a scathing attack against the Centre for allegedly spreading “misinformation” about the state's farmers with its recent letter on the plight of “bonded labourers”.

Singh said it was “yet another conspiracy to defame Punjab's farmers", whom the centre and the BJP have been "persistently trying to malign by dubbing them as terrorists, urban naxals and goons” to derail their agitation against the new central farm laws.

The chief minister was reacting to the letter sent by the Ministry of Home Affairs to the Punjab government on the plight of 58 “bonded labourers” rescued in the northern state.

He castigated the Centre over its "unwarranted charges" of farmers using people as bonded labourers in Punjab and also termed the letter a “bundle of lies”.

“An analysis of the whole episode reveals that highly sensitive information pertaining to national security regarding the arrest of some suspicious persons, apprehended by the Border Security Force (BSF) from close to the volatile Indo-Pak border, has been unscrupulously twisted on baseless conjectures to malign and tarnish the farmer community,” Singh said in a statement.

“This reality has been further substantiated by the fact that a selective leakage of the contents of the Ministry of Home Affairs (MHA) letter to some leading newspapers and media houses have been done without waiting for an appropriate response from the state government,” he said.

Asserting that his government and the state police are competent to safeguard the human rights of the poor and the downtrodden, the CM said suitable action has already been initiated in each case and most of the people are residing with their families.

“If anything comes to notice at any stage, suitable legal action will be initiated against the culprits,” he said.

In the March 17 letter to the Chief Secretary of Punjab, the home ministry had said the BSF found that these 58 people, who were brought to Punjab with the promise of good salary but exploited, were given drugs and forced to work in inhuman conditions once they reached the state.

The home ministry said the BSF had informed that these labourers were apprehended from the border areas of Gurdaspur, Amritsar, Ferozepur and Abohar in Punjab in 2019 and 2020.

Rejecting the letter as “factually incorrect'', the Punjab chief minister alleged that neither the data nor the reports submitted by BSF were in tune with the content of the letter.

“... it is not the job of the BSF to investigate such matters, and they are only responsible for detaining any person found to be roaming along the border in suspicious circumstances, and handing them over to the local police,” he said in the statement.

The Congress leader also asserted that all the 58 cases alleged by the Centre have been investigated thoroughly and nothing of this kind had been found.

He said, of the 58 detainees, four belong to different areas of Punjab and were found roaming near the Indo-Pak border by the BSF, while three were found to be intellectually disabled.

One Paramjit Singh, a resident of Patiala, has been mentally disabled from last more than 20 years. He had left his home about two months before his detention, the CM said.

"Subsequently, all these three people were handed over to their family members on the same day after verification by the local police," he said.

Further, 16 of the 58 detainees were found to be intellectually disabled, of whom four were suffering from the disorder since childhood, he said.

"One Babu Singh, a resident of Bulandshahr in Uttar Pradesh, was undergoing treatment in Agra. He was handed over to his family on the production of his medical record," the chief minister noted.

The identity of three other persons apprehended could not be established due to their mental health conditions, Singh said.

"It has also come to light that 14 persons had come to Punjab only a few days/weeks prior to their apprehension, hence the conclusion that they were working as bonded labourers since long is totally refuted,” he said, adding that none of these persons has made any allegation of being forcibly kept as farm labourers under inhuman conditions even before the courts.

The CM also refuted the charges that they were given drugs and made to work for long hours.

“Nothing on record suggests that they were forcibly infused drugs to keep them working for long hours, and moreover, it is incorrect to conclude that the intellectual disability of these persons is drug-induced.

"Most of them were medically examined with the help of the BSF and police, and nothing on record suggested that they were hooked to any habit-forming drugs," he added.

The home ministry had on Saturday termed as "distorted" and "misleading" media reports linking its letter to the farmers' agitation and said no motive should be ascribed to a routine communication over law and order issues.