The situation in Rajasthan’s Dungarpur remained tense on the fourth consecutive day on Sunday as a group of protesters torched a pickup van and vandalised property. 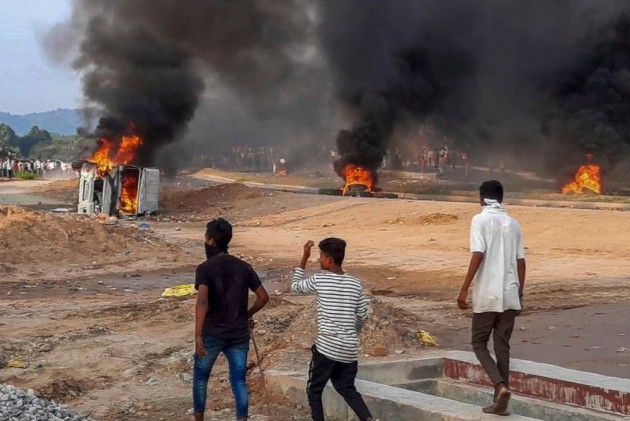 The chief minister once again appealed to the agitators to end the violence and said the government is ready to meet all the legitimate demands of any section of the society, the release said.

Governor Kalraj Mishra spoke to Gehlot on phone in Jaipur and called principal secretary (home) Abhay Kumar and ADG (law and order) Saurabh Srivastava at Raj Bhawan and directed them to control the situation, it said.

Meanwhile, the agitators pelted stones at police, torched a few other vehicles and continued to hold control over nearly 25 km stretch of the highway.

On direction of the chief minister, Bamniya, former Udaipur MP Raghuveer Meena and other public representatives of Dungarpur district met a delegation of agitating candidates to resolve the matter.

The meeting lasted for nearly three hours at the residence of Meena in Parsad, Udaipur, which is nearly 60 km from the violence hit area.

“We have appealed to the agitators to end the violence while assuring them that the government will do what is legitimate to meet their demand. The meeting was held in a positive manner,” Meena told PTI.

He said that the government's priority is to control the situation first.

After the meeting, Roat and Meena left for Kherwara in Dungarpur to convince the agitators.

The violence continued on Friday and Saturday, when one man was shot dead.

An official of Dungarpur police control room said a pickup van was torched in Ransagar area at around 3 am on Sunday.

There were also reports of protesters entering residential areas.

A police official deployed in Dungarpur said the situation is tense and efforts are being made to restore the law and order.

The protestors have so far torched over 25 vehicles, ransacked several shops, hotels and a petrol pump, he said.

A man was killed in firing during the violent protests on Saturday. However, police said it was not confirmed whether the man was killed in police firing or was hit by one of the bullets fired by the protesters.

Another police officer said that nearly 25 km of the highway is blocked.

“The highway is blocked from Ratanpur to Khariwara. Once the situation is under complete control, traffic will be resumed on the highway,” he said.

The vehicle of SP Dungarpur was also torched on Thursday.

Thirty-five policemen including additional SP and deputy SP were injured in the stone pelting incident on Thursday.

The police have so far arrested 30 people in connection with the violence while mobile internet services have been suspended in the affected area in view of the tension.